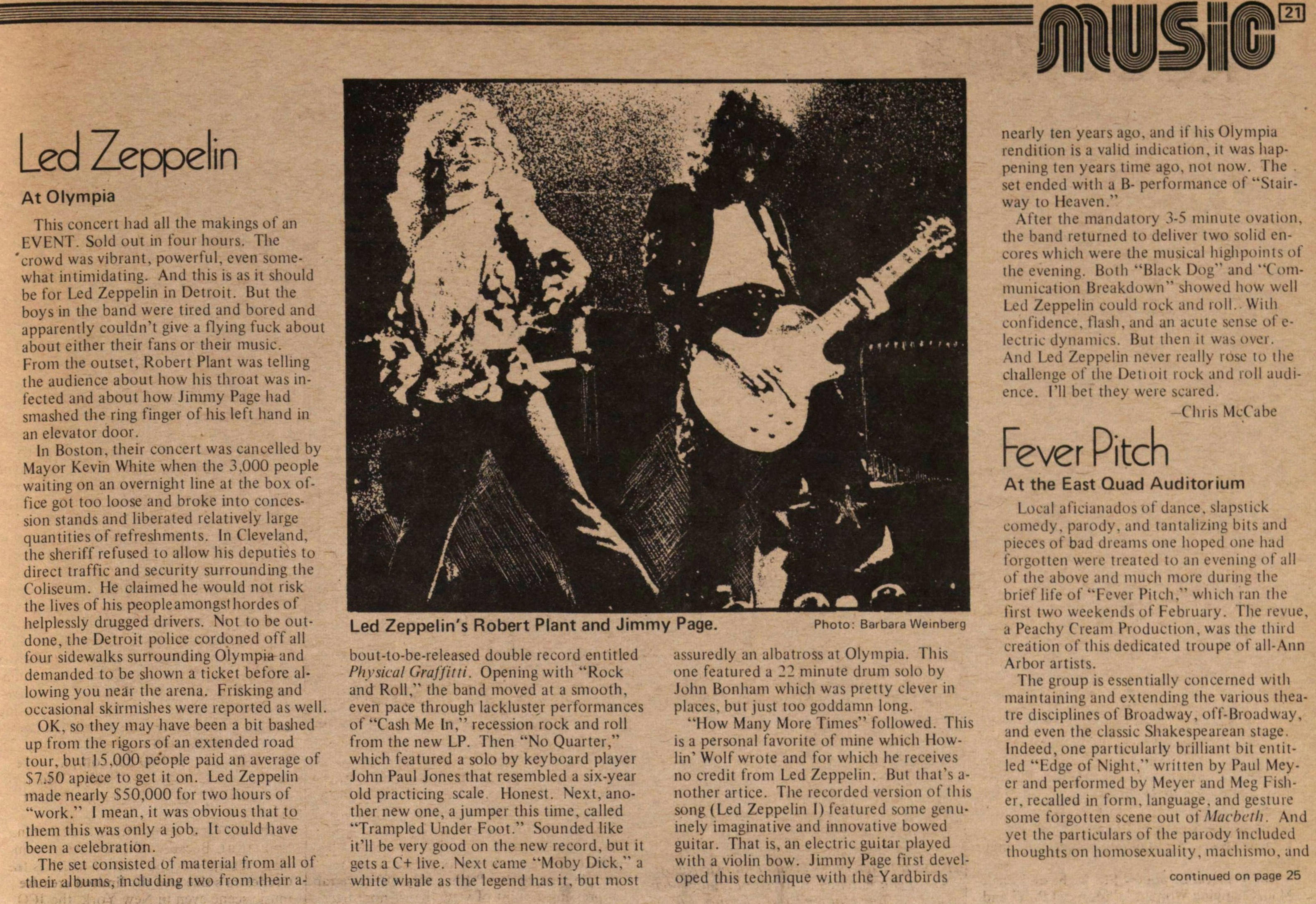 This concert had all the makings of an EVENT. Sold out in tour hours. The 'crowd was vibrant, powerful, even somewhat intimidating. And this is as it should be for Led Zeppelin in Detroit. But the boys in the band were tired and bored and apparently couldn't give a llying fuck about about either their fans or their music. From the outset, Robert Plant was telling the audience about how his throat was infected and about how Jimmy Page had smashed the ring t'ingei of his left hand in an elevator door. In Boston, their concert was cancelled by Mayor Kevin White when the 3.000 people waiting on an overnight line at the box office got too loóse and broke into concession stands and liberated relatively large quantitiesof refresliments. In Cleveland, the sheriff refused to allow his dcputies to direct traffic and security surrounding the Coliseum. He claimedhe would not risk the lives of his peopleamongst hordes of helplessly drugged drivers. Not to be outdone, the Detroit pólice cordoned off all four sidewalks surrounding Olympk and demanded to be shown a ticket before allowing you neár the arena. Frisking and occasions! skirmishes were reported as well. OK, so they may have been a bit bashed up from the rigors of an extended road tour, but 15,000 people paid an average of $7.50 apiete to get it on. Led Zeppelin made nearly $50,000 for two hours of "work." I mean, it was obvious that to them this was only a job. It could have been a celebration. The set consisted of material from all of their albums, including two from their buut-tü-be-released doublé record entitled f'hysicul GraJJïtti. Opening witli "Rock and Roll," the band moved at a smooth, even pace through lackluster performances of "Cash Me In," recession rock and roll trom the new LP. Then "No Quarter," which featured a solo by keyboard player John Paul Jones tliat resembled a six-year old practicing scale Honest. Next, anotlier new one, a jumper tliis time, called "Trampled Under Foot." Sounded like it' 11 be very good on the new record, but it gets a C+ live. Next carne "Moby Dick," a white wlrjle as the legend lias it. but most assiiiedly an albatrossat Olympia. This onc featured a 22 minute drum solo by John Bonham whieh was pietiy clever in places, but jusl too goddamn long. "How Many More Times" followed. This is a personal favorite of mine which Howlin' Wolf wrote and for which he receives no credit froni Led Zeppelin. Hut thai's another artice. The recorded version of th is song (Led Zeppelin I) featured some genuinely imaginative and innovative bowed guitar. That is. an electric guitar played with a violin bow. Jimmy Page fiisi dcveloped this technique with the Yardbirds nearly ten years ago. and it liis Olympia rendition is a valid indica t ion, il was happening ten years time ago, nol now. The set ended with a performance of "Stairway to Heaven." ífter the mandatory 3-5 minute ovation. the band returned to del i vet two solid cncores which were the musical higlipoints of the evening. Boih "Black Dog" atul "Comnuinicaiion Breakdown" showed how well l ed Zeppelin could rock and roll.-Wilfa cohfidence, flash, and an acute sense ol electric dynamics. Bul then it was over. ■nd Led Zeppelin nevei really rose to ilie cliallenge of tire Detioil rock and rol! audience. I'll bei they were scared.