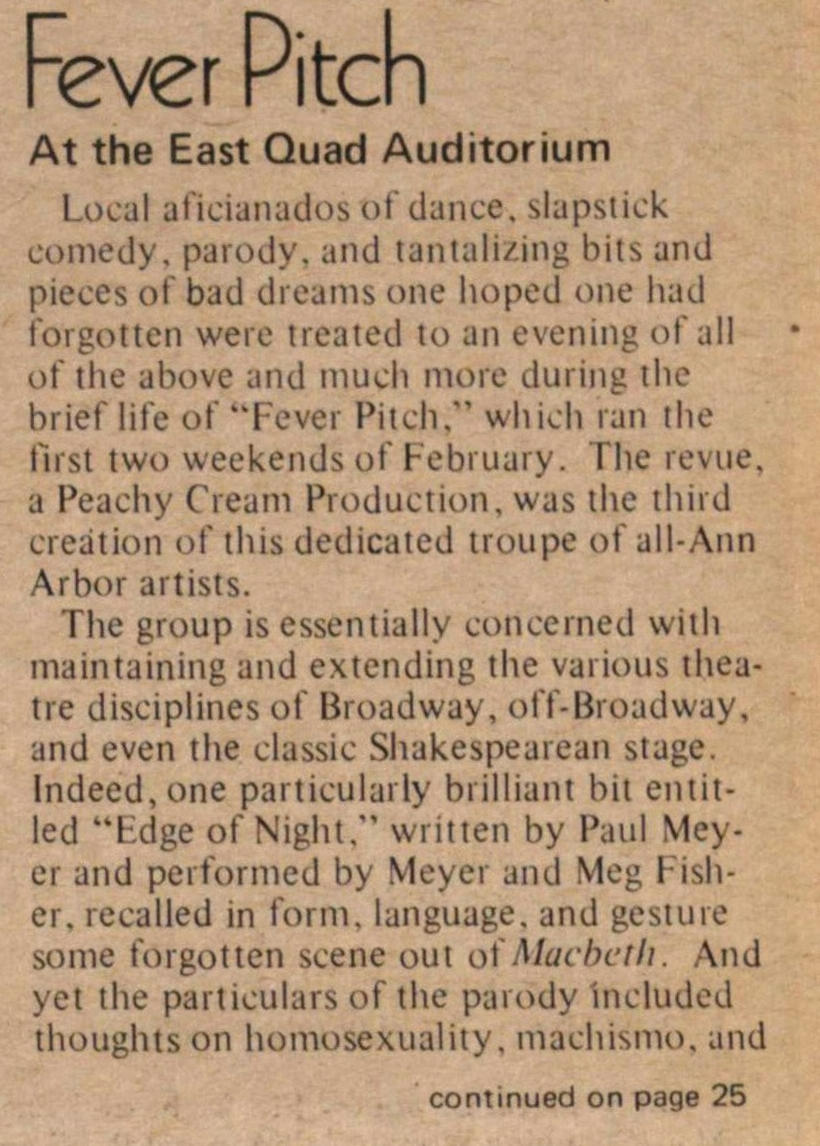 al aficianados ol dance, slapstick comedy, parody, and tantatizing bits and piceos of bad dreams one hoped one had forgotten were treated to an evening of all of the above and much more during the briol lito of "I ever Pitch," which ran the first two weekends of February. The revue. a Peachy Cream Production, was the third creátion of tliis dedicated troupe of Ann Arbor artists. The group is essentially eoncerned vvith maintaining and extending the various ihoatre disciplines of Broadway, off-Broadway, and even the classic Shakespearèan stage, Indeed, one particulaily brilliant bit eniitted "lidge of Night," written by Paul Meyer and pert'ormed by Moyer and Meg Fisher, recalled in form, language, and gesture some fórgotten scène out of Macbeth. And yet the particular of the parody included thoughtson homosexual ity, machismo, and continued on page 25 Mil SIC continued from page 21 cannibalism, the whole unlikely combination reducing the entire house to state of appreciaiive laughter. Other outstanding biis were "Mekhcholy Serenade.'" a dusty oíd bailad crooned to perfect ion by sexy Keitli Smith, who is Ann Arbor's answer to the Velvet Fog liiinselt. Mei Torme; ""The Lady is a Tramp," sung by Val Giffprd who exuded a handson-hips sexiness thai combined the best of botli Mae West and Julie London;a clever update of the racy Cole Por ter evergreen "Let's Do It" wherein Debbie Faigenbaum and Michale Kaplan did do it to it until they, and everybody else, were satisfied; and "The Picture SIiow Blues." an intricate performance by Peter Anderson as Blind Al Alley Cocaïne, a degeneiate and wise old Blues singer. Anderson is one of the major talents in the troupë. He wrote ot cowrote and performed in about a half-doen of the skits including "Boffo and Waffles" in vvhich he and Marty Sherman un'mask theii clown characters onstage and indulge in a bit of existential actihg verite; and "The Greatest Nation On Earth," which is a first-rate topical politica! satire. However, fliere is an uneven quality to Anderson 's writing which was evident in the silliness of "The Operating Theatre" and in "Word Play." which indulged his occasional penchani lor clieap sexual humor and tiresome punning. lve neglected until now to mention the major dance productions in "Fever l'iteh." The l'irst half of the show ended in an animated Fifties-style soda slioppe where Rob Nuismer led eight or ten young punks strutting through the old Del-Vikings tune. "Come Go With Me." The cast tlanced the production to a close with the Busby BerkIcyish "F:ever Pitch." the magnitude and glatnor of which didn't total ly conceal a certain awkwardness. For all it's occasional weak spots, this production was stunning overall. And altluuigh you may have rrüssed "Fevei l'itch" thece's no reason to deny yourself the next Peachy Cream Production, "The Rhinestoned Revue Last of the Bij; Time Spiertdors" which comes as dinncr theatre to the Campus Inn March 5-8. Cali 76l)-2200. ext. 70! 3 today for ad vanee ticket information.