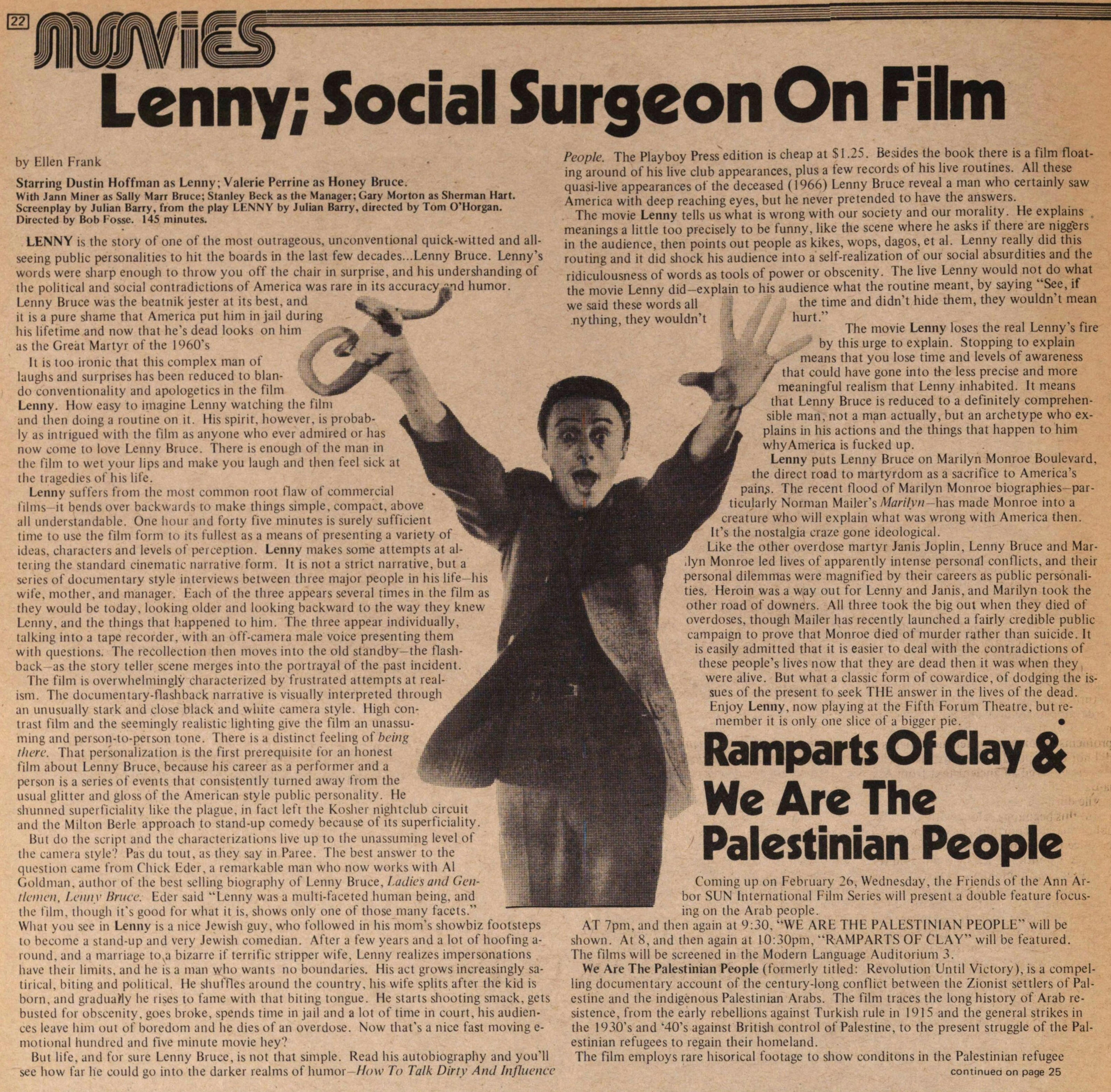 LENNY is the story of one of the most outrageous, unconventional quick-witted and all seeing public personalities to hit the boards in the last few decades.. .Lenny Bruce. Lenny's words were sharp enough to throw you off the chair in surprise, and his understanding of the political and social contradictions of America was rare in its accuracy and humor. Lenny Bruce was the beatnik jester at its best, and il is a pure shame that America put liim in jail during his lifetime and now that he's dead looks on him .as the Great Martyr of the 1960’s

It is too ironic that this complex man of laughs and surprises has been reduced to blando conventionality and apologetics in the film Lenny. How easy to imagine Lenny watching the film and then doing a routine on it. His spirit, however. is ly as intrigued with the film as anyone wlio ever admired or has now come to love Lenny Bruce. There is enough of the man in the film to wet your lips and make you laugh and then feel sick at the tragedies of his life.

Lenny suffers from the most common root flaw of commercial films: it bends over backwards to make things simple, compact, above all understandable. One hour and forty five minutes is surely sufficient time to use the film form to its fullest as means of presenting a variety of ideas, characters and levels of perception. Lenny makes some attempts at altei mg the standard cinematic narrative form. It is not a strict narrative, but a series of documentary style interviews between three major people in his life--his wife, mother, and manager. Each of the three appears several times in the film as they would be today. looking older and looking backward to the way they knew Lenny, and the things that happened to him. The three appear individually. talking into a tape recorder, with an off-camera male voice presenting them with questions. The recollection then moves into the old standby-the flashback as the storyteller scène merges into the portrayal of the past incident.

The film is overwhelmingly characterised by frustrated attempts at realism. The documentary-flashback narrative is visually interpreted through an unusually stark and close black and white camera style. High contrast film and the seemingly realistic lighting give the film an unassuming and person-to-person tone. There is a distinct feeling of being there. That personalization is the ftrsi prerequisite for an honest film about Lenny Bruce, because his career as a performer and a person is a series of events that consistently turned away from the usual glitter and gloss óf the American style public personality. He shunned superficiality like the plague, in fact left  the Kosher nightclub circuit and the Milton Bêrle approach to stand-up comedy because of lts superficiality.

But does the script and the characterIzations live up to the unassuming level of the camera style? Pas du tout. as they say in Paree. The best answer to the question came from Chick Lder. a remarkable man who now works with Al Goldman, author of the best selling biography of Lenny Bruce. Ladiesand Genrietnen, Lenny Bruce, Eder said "lenny was a multi-faceted human being. and the film, though it's good for what it is. shows only one of those many facets." What you see in Lenny is a nice Jewiish guy. who followed in his mom's showbiz footsteps to become a stand-up and very Jewish comedian. After a few years and a lot of hoofing around, and a marriage to a bizarre if terrific stripper wife, Lenny realizes impersonations have their limits, and he is a man who wants no boundaries. His act grows increasingly satirical, biting and political. He shuntes around the country, his wife splits after the kid is born. and gradually he rises to fame with that biting longue. He starts shooting smack. gets busted lor obscenity, goes broke, spends time in jail and a lot of time in court, his audiences leave him out of boredom and he dies of an overdose. Now that's a nice fast moving emotional hundred and five minute movie hey?

But life, and for sure Lenny Bruce, is not that simple. Read his autobiography and you'll see how far he could go into the darker realms of humor--How To Talk Dirty And Influence People. The Playboy Press edition is cheap at $1 .25. Besides the book there is a film floating around of his live club appearances, plus a few records of his live routines. All these quasi-live appearances of the deceased (1966) Lenny Bruce reveal a man who certainly saw America with deep reaching eyes, but he never pretended to have the answers.

The movie Lenny tells us what is wrong with our society and our morality. He explains  meanings a liltle too precisely to be funny, like the scène where he asks if there are niggers in the audience, then points out people as kikes, wops, dagos, et al. Lenny really did this routing and it did shock his audience into a self-realization of our social absurdities and the ridiculousness of words as tools of power or obscenity. The live Lenny would not do what the movie Lennv did-explain to his audience what the routine meant, by saying “See, if we said these words all the time and didn't hide them, they wouldn't mean anything, they wouldn"t hurt."

The movie Lenny loses the real Lenny's fire by the urge to explain. Stopping to explain means that you lose time and levéis of awareness that could have gone into the less precise and more meaningful realism that Lenny inhabited. It means that Lenny Bruce is reduced to a definitely comprehensible man, not a man actually, but an archetype who explains in his actions and the things that happen to him why America is fucked up.

Lenny puts Lenny Bruce on Marilyn Monroe Boulevard, the direct road to martyrdom as a sacrifice to America's pain.s. The recent flood of Marilyn Monroe biographies-particularly Norman Mailer's Marilyn has made Monroe into a creature who will explain what was wrong with America then. It's the nostalgia craze gone ideological.

Like the other overdose martyrs Janis Joplin, Lenny Bruce and Marilyn Monroe led lives of apparently intense personal conflicts, and their personal dilemmas were magnified by their careers as public personalities. Heroin was a way out for Lenny and Janis, and Marilyn took the other road of downers. All three took the big out when they died of overdoses. though Mailer has recently launched a fairly credible public campaign to prove that Monroe died of murder rather than suicide. It's easily admitted that it is easier to deal with the contradictions of these people's lives now that they are dead then it was when they were alive. But what a classic form of cowardice, of dodging the issues of the present to seek THE answer in the lives of the dead. Enjoy Lenny, now playing at the Fifth Forum Theatre. but remember it is only one slice of a bigger pie.