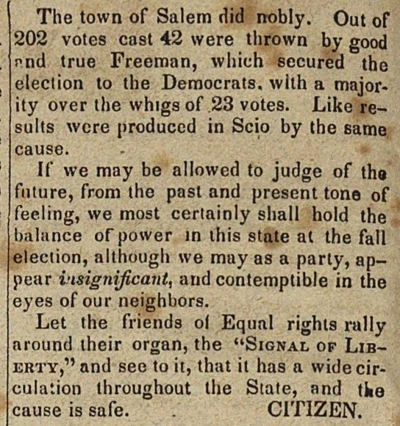 Messrs. Editors: - So far as heard from the liberty ticket has more than doubled since the fall elections. This certainly is a source of great encouragement to the few that stood unmoved in the midst of the political whirlwind, during the Presidential contest. The town of Ann Arbor has more than doubled her vote on the side of human rights. The inflexibility of forty-seven men who carried their principles with them to the polls, came well nigh defeating the Whig justice, who is usually elected by a majority of from forty to sixty -- in this case he had only six. If all those whom we know to be political abolitionists, had proved true to their principles, and had attended the polls, we should have been six months in advance of where we now are -- from the fact, that the whole Whig ticket would have been defeated by the Anti-Slavery influence. But this grand impression is deferred until the fall campaign, which must and will be done. Not that we aim at the overthrow of the Whig party, any more, than of the Democratic party. Neither do we aim at the subvertion of the principles of either any further than those principles come in collision with the great principles of truth and justice. It strikes us that the Whigs have been very unwise and impolitic in passing resolutions at their primary meetings, disfranchising all Whig abolitionists, so far as office is concerned, who happen to be so very unfortunate as to conceive it to be their duty to carry out their principles at the polls. We hope and believe that great good to our cause will be the result of such a course, by demonstrating to the minds of the half-way abolitionists, who still cling to their old pro-slavery parties, that neither of those parties as they now exist, have any sympathy in common with the hated doctrine of abolition. And we would submit to the Whig abolitionists of Ann Arbor whether they will abide resolutions of so exceptionable a character. The town of Salem did nobly. Out of 202 votes cast 42 were thrown by good and true Freeman, which secured the election to the Democrats, with a majority over the Whigs of 23 votes. Like results were produced in Scio by the same cause. If we may be allowed to judge of the future, from the past and present tone of feeling, we most certainly shall hold the balance of power in this state at the fall election, although we may as a party, appear insignificant, and contemptible n the eyes of our neighbors. Let the friends of Equal rights rally around their organ, the "Signal of Liberty," and see to it, that it has a wide circulation throughout the State, and the cause is safe. CITIZEN.