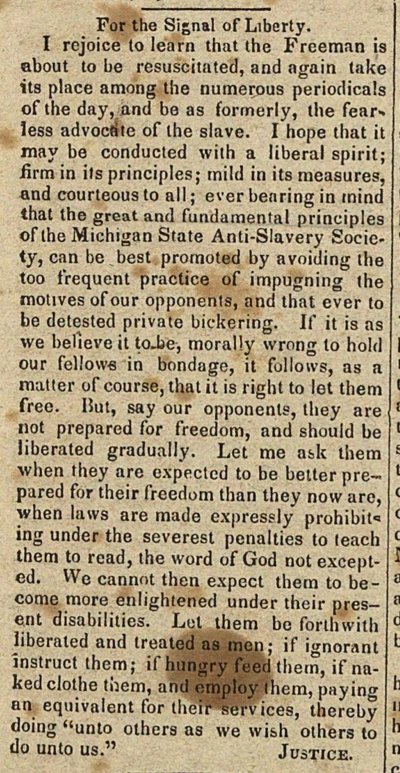 I rejoice to learn that the Freeman is about to be resuscitated, and again take its place among the numerous periodicals of the day, and be as formerly, the fearless advocate of the slave. I hope that it may be conducted with a liberal spirit; firm in its principles; mild in its measures, and courteous to all; ever bearing in mind that the great and fundamental principles of the Michigan State Anti-Slavery Society, can be best promoted by avoiding the too frequent practice of impugning the motives of our opponents, and that ever to be detested private bickering. If it is as we believe it to be, morally wrong to hold our fellow in bondage, it follows, as a matter of course, that it is right to let them free. But, say our opponents, they are not prepared for freedom, and should be liberated gradually. Let me ask them when they are expected to be better prepared for their freedom than they now are, when laws are made expressly prohibiting under the severest penalties to teach them to read, the word of God not excepted. We cannot then expect them to become more enlightened under their present disabilities. Let them be forthwith liberated and treated as men; if ignorant instruct them; if hungry feed them, if naked clothe them, and employ them, paying an equivalent for their services, thereby doing "unto others as we wish others to
do unto us. "