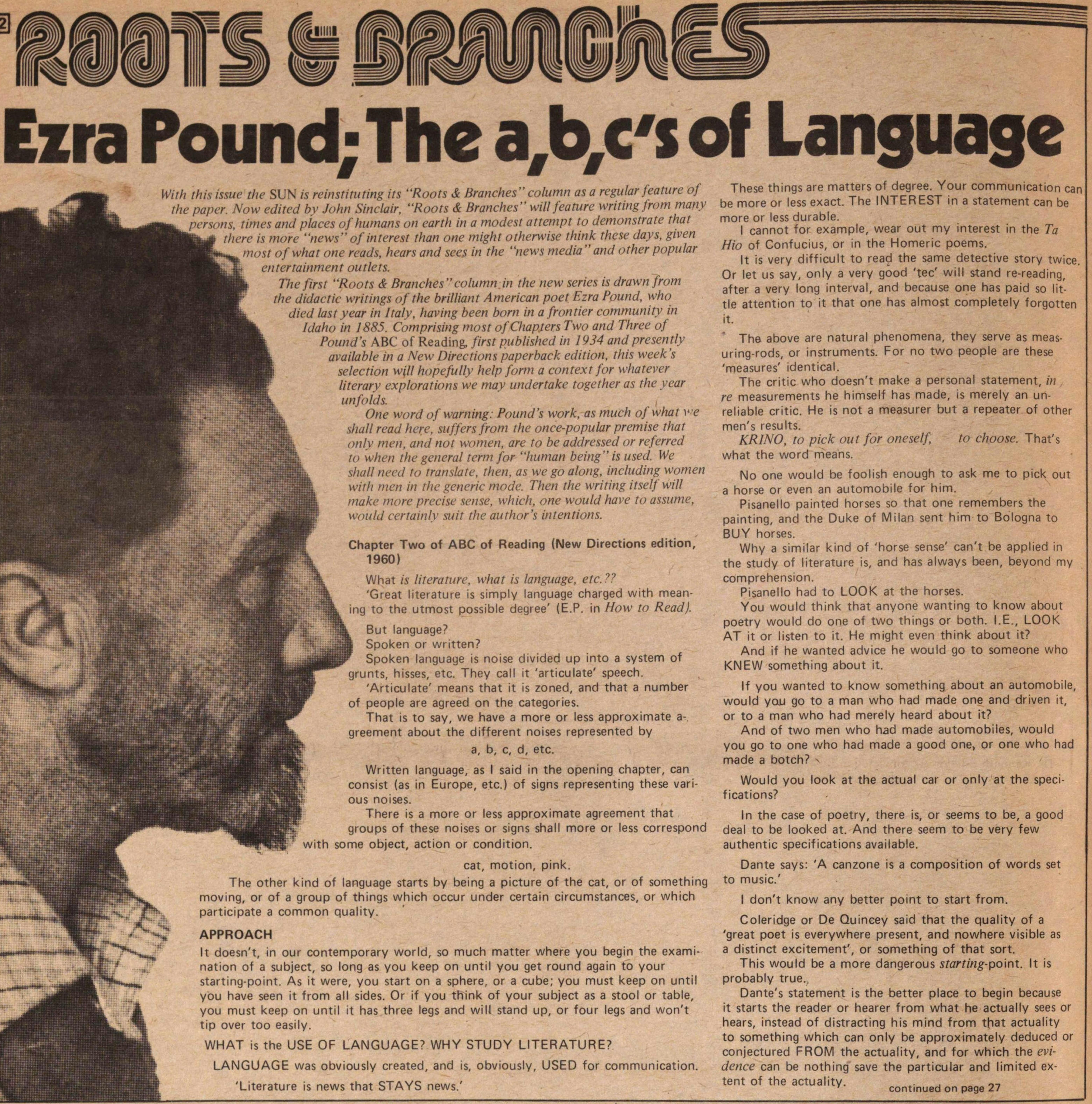 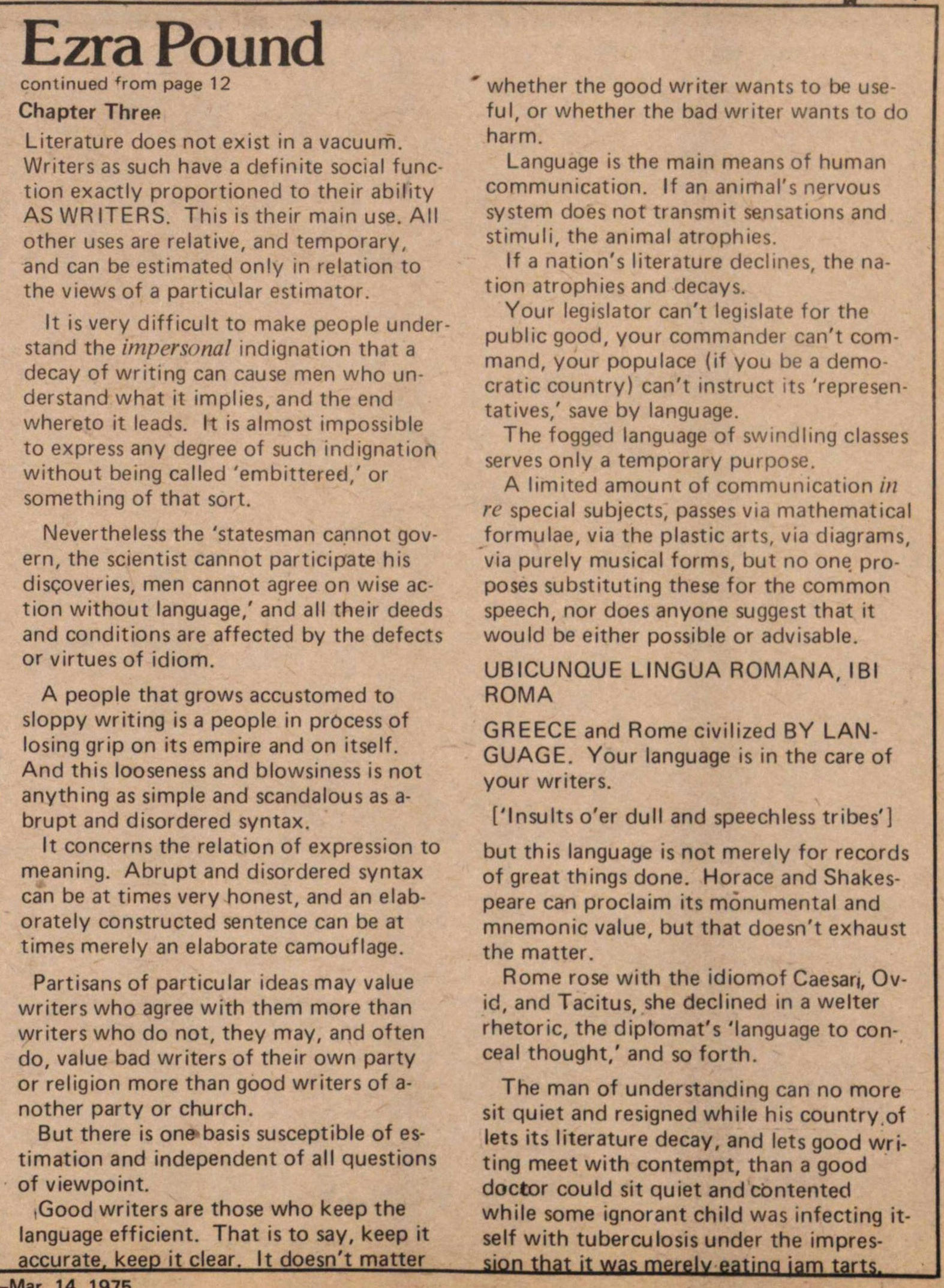 ROOTS & BRANCHES
Ezra Pound; The a,b,c's of Language
With this issue the SUN is reinstituting its "Roots & Branches" column as a regular feature of the paper. Now edited by John Sinclair, "Roots & Branches" will feature writing from many persons, times and places of humans on earth in a modest attempt to demonstrate that there is more "news" of interest than one might otherwise think these days, given most of what one reads, hears and sees in the "news media" and other popular entertainment outlets.
The first "Roots & Branches" column. in the new series is drawn front the didactic writings of the brilliant American poet Ezra Pound, who died lust year in Italy, having been born in a frontier community in Idaho in 1885. Comprising most of Chapters Two and Three of Pound's ABC of Reading, fist published in 1934 and presently available in a New Directions paperback edition, this week's selection will hopefully help farm a context f or whatever literary explorations we may undertake together as the year unfolds.
One word of warning: Pound's work, as much of what we shall read here, suffers from the once-popular premise that only men, and not women, are to be addressed or referred to when the general term for "human being" is used. We shall need to Translate, then, as we go along, including women with men in the generic mode. Then the writing itself will make more precise sense, which, one would have to assume, would certainly suit the author's intentions.

Chapter Two of ABC of Reading (New Directions edition, 1960)
What is literature, what is language, etc.?? 'Great literature is simply language charged with meaning to the utmost possible degree' (E.P. n How to Read).
But language?
Spoken or written?
Spoken language is noise divided up into a system of grunts, hisses, etc. They call it 'articulate' speech. 'Articulate' means that it is zoned, and that a number of people are agreed on the categories.
That is to say, we have a more or less approximate agreement about the different noises represented by a, b, c, d, etc.
Written language, as I said in the opening chapter, can consist (as in Europe, etc.) of signs representing these various noises.
There is a more or less approximate agreement that groups of these noises or signs shall more or less correspond with some object, action or condition.
cat, motion, pink.
The other kind of language starts by being a picture of the cat, or of something moving, or of a group of things which occur under certain circumstances, or which participate a common quality.

APPROACH
It doesn't, in our contemporary world, so much matter where you begin the examination of a subject, so long as you keep on until you get round again to your starting-point. As it were, you start on a sphere, or a cube; you must keep on until you have seen it from all sides. Or if you think of your subject as a stool or table, you must keep on until it has three legs and will stand up, or four legs and won't tip over too easily.
WHAT is the USE OF LANGUAGE? WHY STUDY LITERATURE?
LANGUAGE was obviously created, and is, obviously, USED for communication.
'Literature is news that STAYS news.'
These things are matters of degree. Your communication can be more or less exact. The INTEREST in a statement can be more or less durable.
I cannot for example, wear out my interest n the Ta Hio of Confucius, or in the Homeric poems.
It is very difficult to read the same detective story twice. Or let us say, only a very good 'tec' will stand re-reading, after a very long interval, and because one has paid so little attention to it that one has almost completely forgotten it.
The above are natural phenomena, they serve as measuring-rods, or instruments. For no two people are these 'measures' identical.
The critic who doesn't make a personal statement, in re measurements he himself has made, is merely an unreliable critic. He is not a measurer but a repeater of other men's results.
KRINO, to pick out for oneself, to choose. That's what the word means.
No one would be foolish enough to ask me to pick out a horse or even an automobile for him.
Pisanello painted horses so that one remembers the painting, and the Duke of Milan sent him to Bologna to BUY horses.
Why a similar kind of 'horse sense' can't be applied in the study of literature is, and has always been, beyond my comprehension.
Pisanello had to LOOK at the horses.
You would think that anyone wanting to know about poetry would do one of two things or both. I.E., LOOK AT it or listen to it. He might even think about it?
And if he wanted advice he would go to someone who KNEW something about it.
If you wanted to know something about an automobile, would you go to a man who had made one and driven it, or to a man who had merely heard about it?
And of two men who had made automobiles, would you go to one who had made a good one, or one who had made a botch?
Would you look at the actual car or only at the specifications?
In the case of poetry, there is, or seems to be, a good deal to be looked at. And there seem to be very few authentic specif ications available.
Dante says: 'A canzone is a composition of words set to music.'
I don't know any better point to start from.
Coleridge or De Quincey said that the quality of a 'great poet is everywhere present, and nowhere visible as a distinct excitement', or something of that sort.
This would be a more dangerous starting-point. It is probably true.
Dante's statement is the better place to begin because it starts the reader or hearer from what he actually sees or hears, instead of distracting his mind from that actuality to something which can only be approximately deduced or conjectured FROM the actuality, and for which the evidence can be nothing save the particular and limited extent of the actuality.

Ezra Pound
continued from page 12
Chapter Three
Literature does not exist n a vacuum. Writers as such have a definite social function exactly proportioned to their ability AS WRITERS. This is their main use. All other uses are relative, and temporary, and can be estimated only in relation to the views of a particular estimator.
It is very difficult to make people understand the impersonal indignation that a decay of writing can cause men who understand what it implies, and the end whereto it leads. It is almost impossible to express any degree of such indignation without being called 'embittered,' or something of that sort.
Nevertheless the 'statesman cannot govern, the scientist cannot participate his discoveries, men cannot agree on wise action without language,' and all their deeds and conditions are affected by the defects or virtues of idiom.
A people that grows accustomed to sloppy writing is a people in process of losing grip on its empire and on itself. And this looseness and blowsiness is not anything as simple and scandalous as abrupt and disordered syntax.

But there is on basis susceptible of estimation and independent of all questions of viewpoint.

Language is the main means of human communication. If an animal's nervous system does not transmit sensations and stimuli, the animal atrophies.

If a nation's literature declines, the nation atrophies and decays.

Your legislator can't legislate for the public good, your commander can't command, your populace (if you be a democratic country) can't instruct its 'representatives,' save by language.

The fogged language of swindling classes serves only a temporary purpose.

A limited amount of communication in re special subjects, passes via mathematical formulae, via the plastic arts, via diagrams, via purely musical forms, but no one proposes substituting these for the common speech, nor does anyone suggest that it would be either possible or advisable.

GREECE and Rome civilized BY LANGUAGE. Your language is in the care of your writers.

but this language is not merely for records of great things done. Horace and Shakespeare can proclaim its monumental and mnemonic value, but that doesn't exhaust the matter.

Rome rose with the idiomof Caesar Ovid, and Tacitus, she declined in a welter rhetoric, the diplomat's language to conceal thought,' and so forth.

The man of understanding can no more sit quiet and resigned while his country of Iets its literature decay, and Iets good writing meet with contempt, than a good doctor could sit quiet and contented while some ignorant child was infecting itself with tuberculosis under the impression that it was merely eating jam tarts