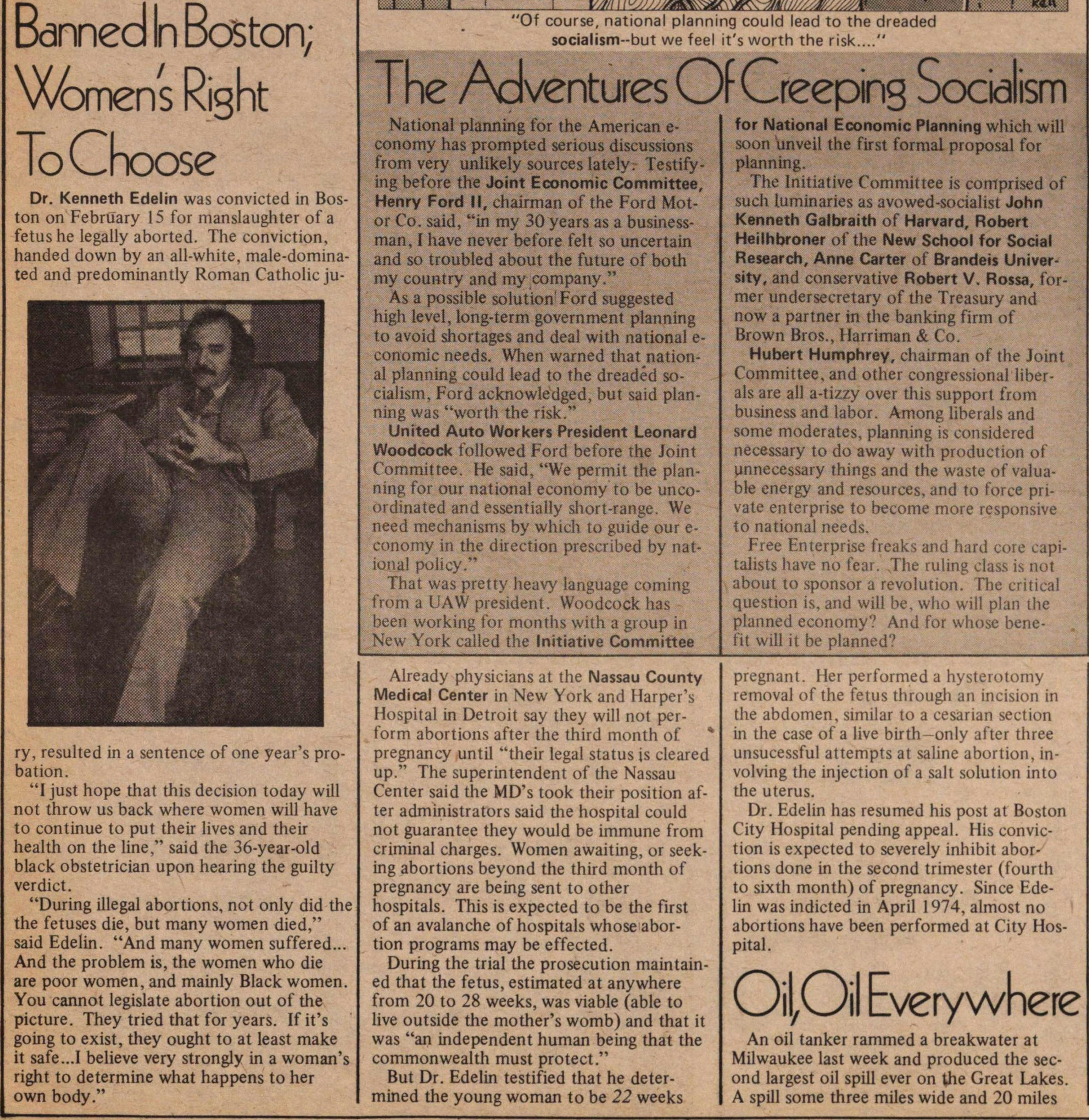 Dr. Kenneth Edelin was convicted in Boston on February 15 for manslaughter of a fetus he legally aborted. The conviction, handed down by an all-white, male-dominated and predominantly Roman Catholic jury, resulted in a sentence of one year's probation.

"I just hope that this desicion today will not throw us back where women will have to continue to put their lives and their health on the line." said the 36-year-old black obstetrician upon hearing the guilty verdict.

"During illegal abortions, not only did the the fetuses die, but many women died," said Edelin. "And many women suffered... And the problem is, the women who die are poor women, and mainly Black women. You cannot legislate abortion out of the picture. They tried that for years. If it's going to exist, they ought to at least make it safe...I believe very strongly in a woman's right to determine what happens to her own body."

Already physicians at the Nassau County Medical Center in New York and Harper's Hospital in Detroit say they will not perform abortions after the third month of pregnancy until "their legal status is cleared up." The superintendent of the Nassau Center said the MD's took their position after administrators said the hospital could not guarantee they would be immune from criminal charges. Women awaiting, or seeking abortions beyond the third month of pregnancy are being sent to other hospitals. This is expected to be the first of an avalanche of hospitals whose abortion programs may be effected.

During the trial the prosecution maintained that the fetus, estimated at anywhere from 20 to 28 weeks, was viable (able to live outside the mother's womb) and that it was "an independent human being that the commonwealth must protect."

But Dr. Edelin testified that he determined the young woman to be 22 weeks pregnant. Her performed a hysterotomy removal of the fetus through an incision in the abdomen, similar to a cesarian section in the case of a live birth- only after three unsucessful attempts at saline abortion, involving the injection of a salt solution into the uterus.

Dr. Edelin has resumed his post at Boston City Hospital pending appeal. His conviction is expected to severely inhibit abortions done in the second trimester (fourth to sixth month) of pregnancy. Since Edelin was indicted in April 1974, almost no abortions have been performed at City Hospital.