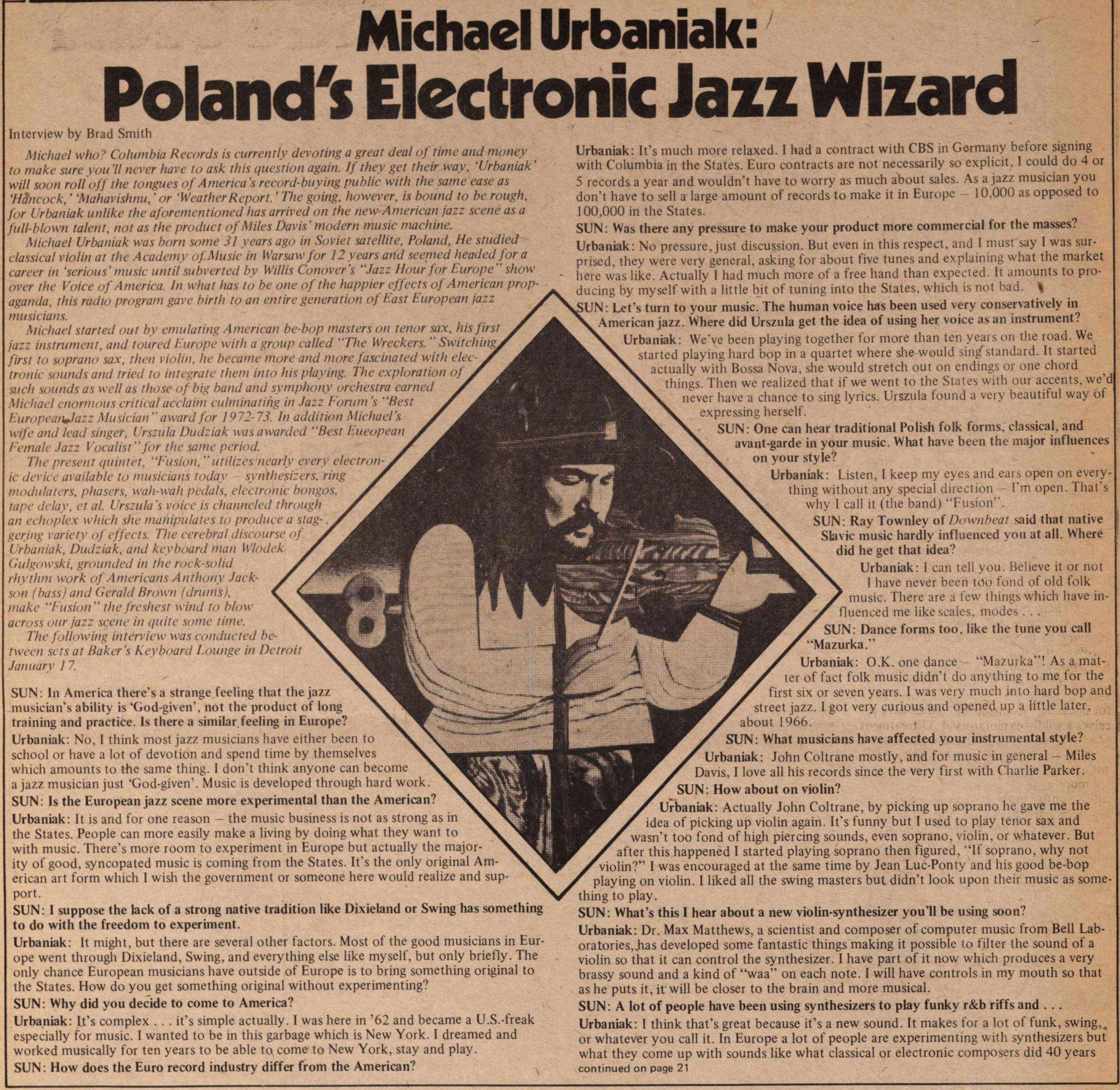 Michael who? Columbia Records is currcntly devoting a great deal of time and money to make sure you'll never have to ask this question again. If they get their way, 'Urbaniak ' will soon roll off the tongues of America 's record-buying public with the same ease as 'Hancock,' 'Mahavishnu,' or 'Weather Report. ' The going, however, is bound to be rough, for Urbaniak unlike the aforementioned has arrived on the new American jazz scene as a full-blown talent, nor as the product of Miles Davis' modern music machine.

Michael Urbaniak was born some 31 years ago in Soviet satellite, Poland, He studied classical violin at the Academy of Music in Warsaw for 12 years and seemed headed for a career in 'serious' music until subverted by Willis Conover's "Jazz Hour for Europe" show over the Voice of America. In what has to be one of the happier effects of American propaganda, this radio program gave birth to an entire generation of East European jazz musicians.

Michael started out by emulating American be-bop masters on tenor sax, his first jazz instrument, and toured Europe with a group called "The Wreckers." Switching first to soprano sax, then violin, he became more and more fascinated with electronic sounds and tried to integrate them into his playing. The exploration of such sounds as well as those of big band and symphony orchestra earned Michael enormous critical acclaim culminating in Jazz Forum's "Best European Jazz Musician" award for 1972-73. In addition Michael's wife and lead singer, Urszula Dudziak was awarded "Best European Female Jazz Vocalist" for the same period.

The present quintet, "Fusion," utilizes nearly every electronic device available to musicians today--synthesizers, ring modulaters, phasers, wah-wah pedals, electronic bongos, tape delay, et al. Urszula's voice is channeled through an echoplex which she manipulates to produce a staggering variety of effects. The cerebral discourse of Urbaniak, Dudziak, and keyboard man Wlodek Gulgowski, grounded in the rock-solid rhythm work of Americans Anthony Jackson (bass) and Gerald Brown (drums) make "Fusion" the freshest wind to blow across our jazz scene in quite some time.

The following interview was conducted between sets at Baker's Keyboard Lounge in Detroit January 17.

SUN : In America there's a strange feeling that the jazz musician's ability is 'God-given', not the product of long training and practice. Is there a similar feeling in Europe?

Urbaniak: No, I think most jazz musicians have either been to school or have a lot of devotion and spend time by themselves which amounts to the same thing. I don't think anyone can become a jazz musician just 'God-given'. Music is developed through hard work.

SUN: Is the European jazz scene more experimental than the American?

Urbaniak: It is and for one reason - the music business is not as strong as in the States. People can more easily make a living by doing what they want to with music. There's more room to experiment in Europe but actually the majority of good, syncopated music is coming from the States. It's the only original American art form which I wish the government or someone here would realize and support.

SUN: I suppose the lack of a strong native tradition like Dixieland or Swing has something to do with the freedom to experiment.

Urbaniak: lt might, but there are several other factors. Most of the good musicians in Europe went through Dixieland, Swing, and everything else like myself, but only briefly. The only chance European musicians have outside of Europe is to bring something original to the States. How do you get something original without experimenting?

SUN: Why did you decide to come to America?

Urbaniak: It's complex . . . it's simple actually. I was here in '62 and became a U.S.-freak especially for music. I wanted to be in this garbage which is New York. I dreamed and worked musically for ten years to be able to come to New York, stay and play.

SUN: How does the Euro record industry differ from the American?

Urbaniak: It's much more relaxed. I had a contract with CBS in Germany before signing with Columbia in the States. Euro contracts are not necessarily so explicit. I could do 4 or 5 records a year and wouldn't have to worry as much about sales. As a jazz musician you don't have to sell a large amount of records to make it in Europe 10,000 as opposed to 100,000 in the States.

SUN: Was there any pressure to make your product more commercial for the masses?

Urbaniak: No pressure. just discussion. But even in this respect, and I must say I was surprised, they were very general, asking for about five tunes and explaining what the market here was like. Actually l had much more of a free hand than expected. It amounts to producing by myself with a little bit of tuning into the States, which is not bad.

SUN: Let's turn to your music. The human voice has been used very conservatively in American jazz. Where did Urszula get the idea of using her voice as an instrument?

Urbaniak: We've been playing together for more than ten years on the road. We started playing hard bop in a quartet where she would sing standard. It started actually with Bossa Nova, she would stretch out on endings or one chord things. Then we realized that if we went to the States with our accents, we'd never have a chance to sing lyrics. Urszula found a very beautiful way of expressing herself.

SUN: One can hear traditional Polish folk forms, classical, and.avant-garde in your music. What have been the major influences on your style?

Urbaniak: Listen, I keep my eyes and ears open on everything without any special direction. I'm open--that's why I call it (the band) "Fusion".

SUN: Ray Townley of Downbeat said that native Slavic music hardly influenced you at all. Where did he get that idea?

Urbaniak: I can tell you. Believe it or not I have never been too fond of old folk music. There are a few things which have influenced me like scales, modes . . .

SUN: Dance forms too, like the tune you call "Mazurka."

Urbaniak: O.K. one dance--"Mazurka"! As a matter of fact folk music didn't do anything to me for the first six or seven years. I was very much into hard bop and street jazz. I got very curious and opened up a little later, about 1966.

SUN: What musicians have affected your instrumental style?

Urbaniak: John Coltrane mostly, and for music in general - Miles Davis, I love all his records since the very first with Charlie Parker.

SUN: How about on violin?

Urbaniak: Actually John Coltrane, by picking up soprano he gave me the idea of picking up violin again. It's funny but I used to play tenor sax and wasn't too fond of high piercing sounds, even soprano, violin, or whatever. But after this happened I started playing soprano then figured, "If soprano, why not violin?" I was encouraged at the same time by Jean Luc-Ponty and his good be-bop playing on violin. I liked all the swing masters but didn't look upon their music as something to play.

SUN: What's this I hear about a new violin-synthesizer you'll be using soon?

Urbaniak: Dr. Max Matthews, a scientist and composer of computer music from Bell Laboratories, has developed some fantastic things making it possible to filter the sound of a violin so that it can control the synthesizer. I have part of it now which produces a very brassy sound and a kind of "waa" on each note. I will have controls in my mouth so that as he puts it, it will be closer to the brain and more musical.

SUN: A lot of people have been using synthesizers to play funky r&b riffs and . . .

Urbaniak: I think that's great because it's a new sound. It makes for a lot of funk, swing, or whatever you call it. In Europe a lot of people are experimenting with synthesizers but what they come up with sounds like what classical or electronic composers did 40 years ago, which is bullshit! I prefer funky music to semi-avant garde bullshit.

SUN: Some of those people begin to think they're Gods.

Urbaniak: Yes, I don't know what you think but I'm not too tuned into Emerson, Lake, and Palmer. No matter what anybody tells me it's bullshit, a few classical chords, very pretentious. Okay, let them do it. I don't think they're too far out for me, just the opposite-they're too naive.

SUN: When is your next album due?

Urbaniak: It will be out by the end of April with guest guitar players-Larry Coryell and John Abercrombie. I've been trying to use a guitarist for four years but it never worked fully. In a few months we might add one.

Postscript: "Fusion's" performance at Baker's, while obviously not one of their most inspired was nonetheless overwhelming. It is remarkable to hear how much energy and rhythmic drive has been tightly packed into their musical package without it bursting at the seams. It will be interesting to see if "Fusion" succeeds according to Columbia's plan. Inevitably they will be compared to "Weather Report" and "Mahavishnu Orchestra" because of their use of electronic instruments, but this is as far as the comparison should be taken.

"Fusion's" music presents a whole new challenge to American ears which have been brought up to the tune of virtuoso melodic/harmonic improvisers. Judged in this light the playing of Urbaniak, Dudziak, or Gulgowski is little to get excited about. Their music is based on textural contrast -a voice that changes from birdlike screeches to a baby's babbling in the bat of an eyelash, a violin tone that fades from paper thinness into the airy thickness of cotton. One must concentrate not on what notes are being played but how the musician is playing them. Once this adjustment has been made the virtuosity of Urbaniak and his group can fully be appreciated. Don't get the wrong impression. "Fusion's" music is surrounded by an envelope of extremely accessible sound, but the listener who is willing to penetrate beyond the catchy melodies and foot-tapping rhythms will be well rewarded for his or her efforts.