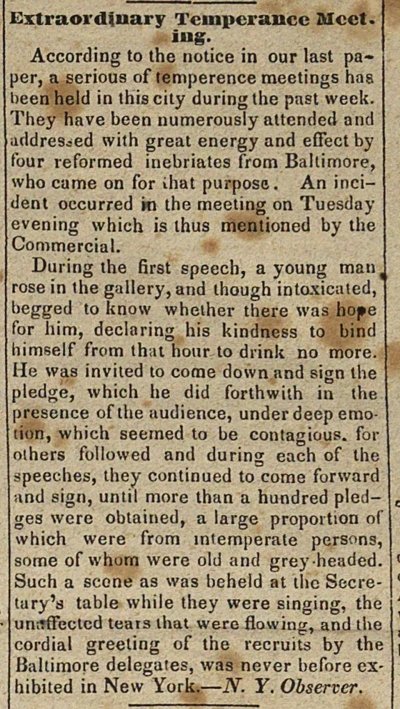 According to the notice in our last paper, a serious of temperence meetings has been held in this city during the past week. They have been numerously attended and addressed with great energy and effect by four reformed inebriates from Baltimore, who came on for that purpose. An incident occurred in the meeting on Tuesday evening which is thus mentioned by the Commercial.

During the first speech, a young man rose in the gallery, and though intoxicated, begged to know whether there was hope for him, declaring his kindness to bind himself from that hour to drink no more. He was invited to come down and sign the pledge, which he did forthwith in the presence of the audience, under deep emotion, which seemed to be contagious. for others followed and during each of the speeches, they continued to come forward and sign, until more than a hundred pledges were obtained, a large proportion of which were from intemperate persons, some of whom were old and grey headed. Such a scene as was beheld at the Secretary's table while they were singing, the unaffected tears that were flowing, and the cordial greeting of the recruits by the Baltimore delegates, was never before exhibited in New York. - N. Y. Observer