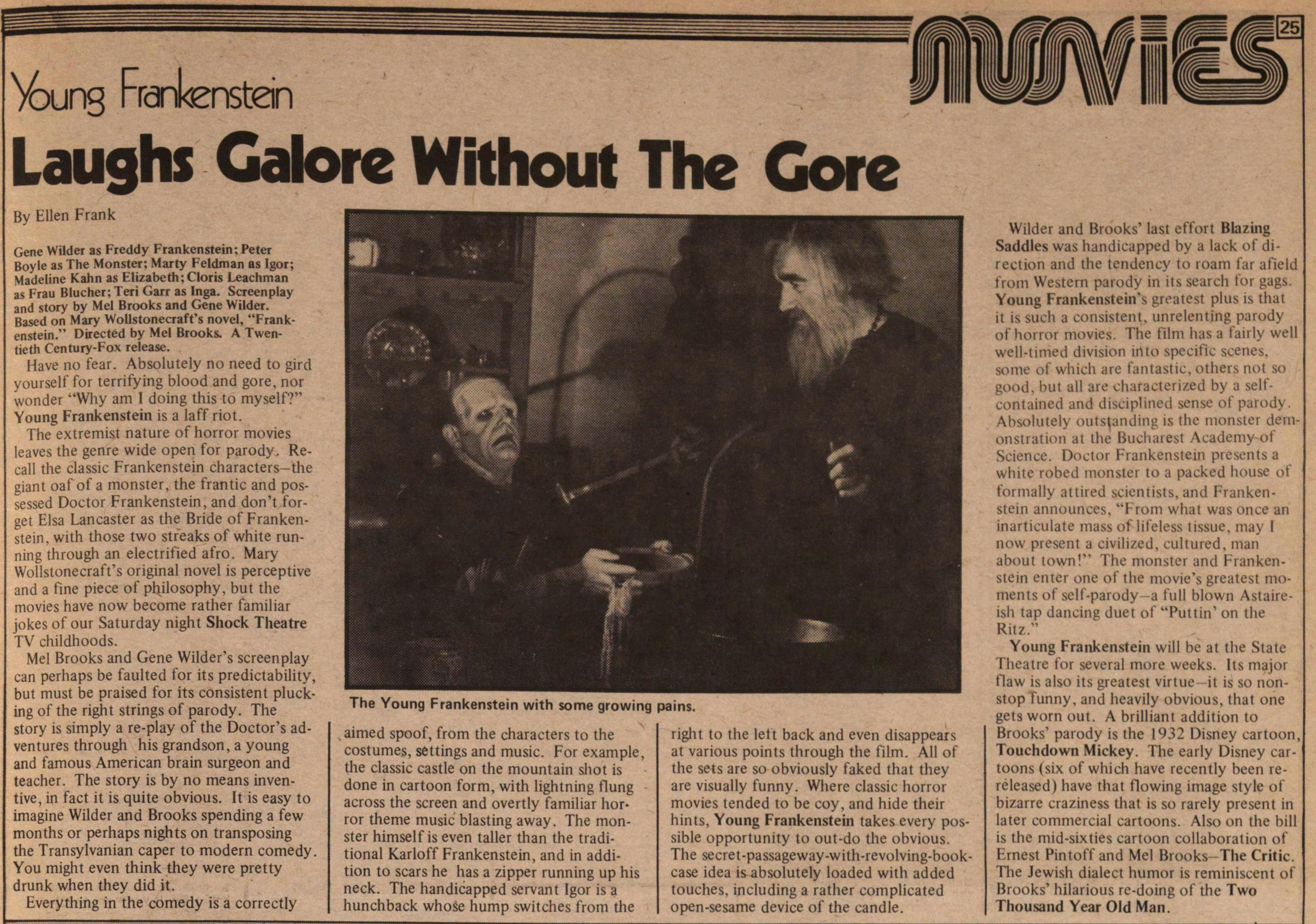 Laughs Galore Without The Gore

Have no fear. Absolutely no need to gird yourself for terrifying blood and gore, nor wonder "Why am I doing this to myself?" Young Frankenstein is a laff riot.

The extremist nature of horror movies leaves the genre wide open for parody. Recall the classic Frankenstein characters-the giant oaf of a monster, the frantic and possessed Doctor Frankenstein, and don't forget Elsa Lancaster as the Bride of Frankenstein, with those two streaks of white running through an electrified afro. Mary Wollstonecraft's original novel is perceptive and a fine piece of philosophy, but the movies have now become rather familiar jokes of our Saturday night Shock Theatre TV childhoods.

Mel Brooks and Gene Wilder's screenplay can perhaps be faulted for its predictability, but must be praised for its consistent plucking of the right strings of parody. The story is simply a re-play of the Doctor's adventures through his grandson, a young and famous American brain surgeon and teacher. The story is by no means inventive, in fact it is quite obvious. It is easy to imagine Wilder and Brooks spending a few months or perhaps nights on transposing the Transylvanian caper to modern comedy. You might even think they were pretty drunk when they did it.

Everything in the comedy is a correctly aimed spoof, from the characters to the costumes, settings and music. For example, the classic castle on the mountain shot is done in cartoon form, with lightning flung across the screen and overtly familiar horror theme music blasting away. The monster himself is even taller than the traditional Karloff Frankenstein, and in addition to scars he has a zipper running up his neck. The handicapped servant Igor is a hunchback whose hump switches from the right to the left back and even disappears at various points through the film. All of the sets are so obviously faked that they are visually funny. Where classic horror movies tended to be coy, and hide their hints, Young Frankenstein takes every possible opportunity to out-do the obvious. The secret-passageway-with-revolving-bookcase idea is absolutely loaded with added touches, including a rather complicated open-sesame device of the candle.

Wilder and Brooks' last effort Blazing Saddles was handicapped by a lack of direction and the tendency to roam far afield from Western parody in its search tor gags. Young Frankenstein's greatest plus is that it is such a consistent, unrelenting parody of horror movies. The film has a fairly well well-timed division into specific scenes, some of which are fantastic, others not so good. In it all are characterized by a self contained and disciplined sense of parody. Absolutely outstanding is the monster demonstration at the Bucharest Academy oi Science. Doctor Frankenstein presents a white robed monster to a packed house of formally attired scientists, and Frankenstein announces, "From what was once an inarticulate mass of lifeless tissue, may I now present a civilized, cultured, man about town!" The monster and Frankenstein enter one of the movie's greatest moments of self-parody -a full blown Astaire-ish tap dancing duet of "Puttin' on the Ritz."

Young Frankenstein will be at the State theatre for several more weeks. lts major flaw is also its greatest value it is so nonstop funny, and heavily obvious, that one gets worn out. A brilliant addition to Brooks' parody is the 1932 Disney cartoon, Touchdown Mickey. The early Disney cartoons (six of which have recently been re-released) have that flowing image style of bizarre craziness that is so rarely present in later commercial cartoons. Also on the bill is the mid-sixties cartoon collaboration of Ernest Pintoff and Mel Brooks-The Critic. The Jewish dialect humor is reminiscent of Brooks' hilarious re-doing of the Two Thousand Year Old Man.