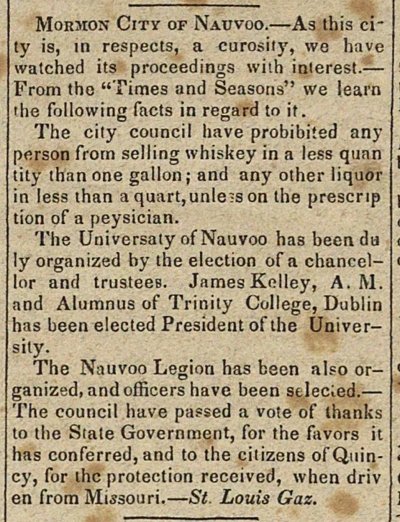 As this city is, in respects, a curiosity, we have watched its proceedings with interest.- From the "Times and Seasons" we learn the following facts in regard to it.

The city council have prohibited any person from selling whiskey in a less quantity than one gallon; and any other liquor in less than a quart, unless on the prescription of a physician.

The University of Nauvoo has been duly organized by the election of a chancellor and trustees. James Kelley, A.M. and Alumnus of Trinity College, Dublin has been elected President of the University.

The Nauvoo Legion has been also organized, and officers have been selected. - The council have passed a vote of thanks to the State Government, for the favors it has conferred,and to the citizens of Quincy, for the protection received, when driven from Missouri. - St. Louis Gaz.