Gov. Gilmer, Of Va., Has Resigned 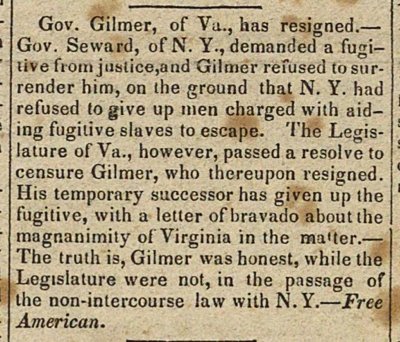 Gov. Seward, of N.Y., demanded a fugitive from justice,and Gilmer refused to surrender him, on the ground that N.Y. had refused to give up men charged with aiding fugitive slaves to escape. The Legislature of Va., however, passed a resolve to censure Gilmer, who thereupon resigned. His temporary successor has given up the fugitive, with a letter of bravado about the magnanimity of Virginia in the matter. - The truth is, Gilmer was honest, while the Legislature were not, in the passage of the non-intercourse law with N.Y. - Free American