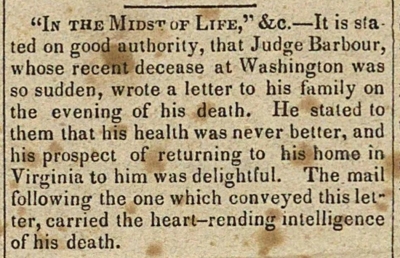 It is stated on good authority, that Judge Barbour, whose recent decease at Washington was so sudden, wrote a letter to his family on the evening of his death. He stated to them that his health was never better, and his prospect of returning to his home in Virginia to him was delightful. The mail following the one which conveyed this letter, carried the heart-rending intelligence of his death.