California Cablevision Gets Cool Reception In A2 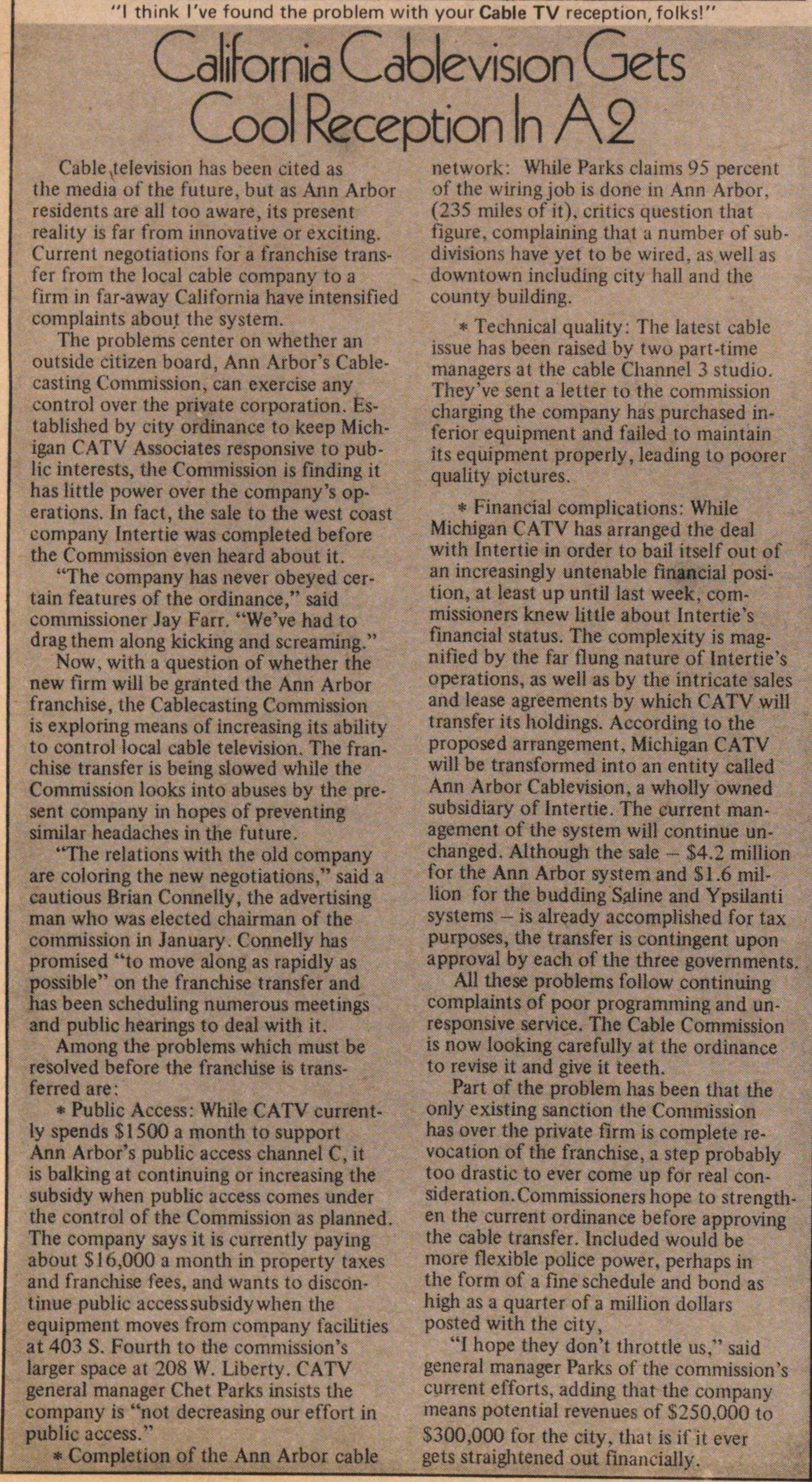 Cable, television has been cited as the media of the future, but as Ann Arbor residents are all too aware, its present reality is far from innovative or exciting. Current negotiations for a franchise transfer from the local cable company to a firm in far-away California have intensified complaints about the system.

The problems center on whether an outside citizen board, Ann Arbor's Cablecasting Commission, can exercise any control over the private corporation. Established by city ordinance to keep Michigan CATV Associates responsive to public interests, the Commission is finding it has little power over the company's operations. In fact, the sale to the west coast company Intertie was completed before the Commission even heard about it.

"The company has never obeyed certain features of the ordinance," said commissioner Jay Farr. "We've had to drag them along kicking and screaming."

Now, with a question of whether the new firm will be granted the Ann Arbor franchise, the Cablecasting Commission is exploring means of increasing its ability to control local cable television. The franchise transfer is being slowed while the Commission looks into abuses by the present company in hopes of preventing similar headaches in the future.

"The relations with the old company are coloring the new negotiations," said a cautious Brian Connelly, the advertising man who was elected chairman of the commission in January. Connelly has promised "to move along as rapidly as possible" on the franchise transfer and has been scheduling numerous meetings and public hearings to deal with it.

Among the problems which must be resolved before the franchise is transferred are:

*Public Access: While CATV currently spends $1500 a month to support Ann Arbor's public access channel C, it is balking at continuing or increasing the subsidy when public access comes under the control of the Commission as planned. The company says it is currently paying about $16,000 a month in property taxes and franchise fees, and wants to discontinue public access subsidy when the equipment moves from company facilities at 403 S. Fourth to the commission's larger space at 208 W. Liberty. CATV general manager Chet Parks insists the company is "not decreasing our effort in public access."

*Completion of the Ann Arbor cable network: While Parks claims 95 percent of the wiring job is done in Ann Arbor, (235 miles of it), critics question that figure, complaining that a number of subdivisions have yet to be wired, as well as downtown including city hall and the county building.

*Technical quality: The latest cable issue has been raised by two part-time managers at the cable Channel 3 studio. They've sent a letter to the commission charging the company has purchased inferior equipment and failed to maintain its equipment properly, leading to poorer quality pictures.

*Financial complications: While Michigan CATV has arranged the deal with Intertie in order to bail itself out of an increasingly untenable financial position, at least up until last week, commissioners knew little about Intertie's financial status. The complexity is magnified by the far flung nature of Intertie's operations, as well as by the intricate sales and lease agreements by which CATV will transfer its holdings. According to the proposed arrangement, Michigan CATV will be transformed into an entity called Ann Arbor Cablevision, a wholly owned subsidiary of Intertie. The current management of the system will continue unchanged. Although the sale - $4.2 million for the Ann Arbor system and $1.6 million for the budding Saline and Ypsilanti systems - is already accomplished for tax purposes, the transfer is contingent upon approval by each of the three governments.

All these problems follow continuing complaints of poor programming and unresponsive service. The Cable Commission is now looking carefully at the ordinance to revise it and give it teeth.

Part of the problem has been that the only existing sanction the Commission has over the private firm is complete revocation of the franchise, a step probably too drastic to ever come up for real consideration. Commissioners hope to strengthen the current ordinance before approving the cable transfer. Included would be more flexible police power, perhaps in the form of a fine schedule and bond as high as a quarter of a million dollars posted with the city,

"I hope they don't throttle us," said general manager Parks of the commission's current efforts, adding that the company means potential revenues of $250,000 to $300,000 for the city, that is if it ever gets straightened out financially.