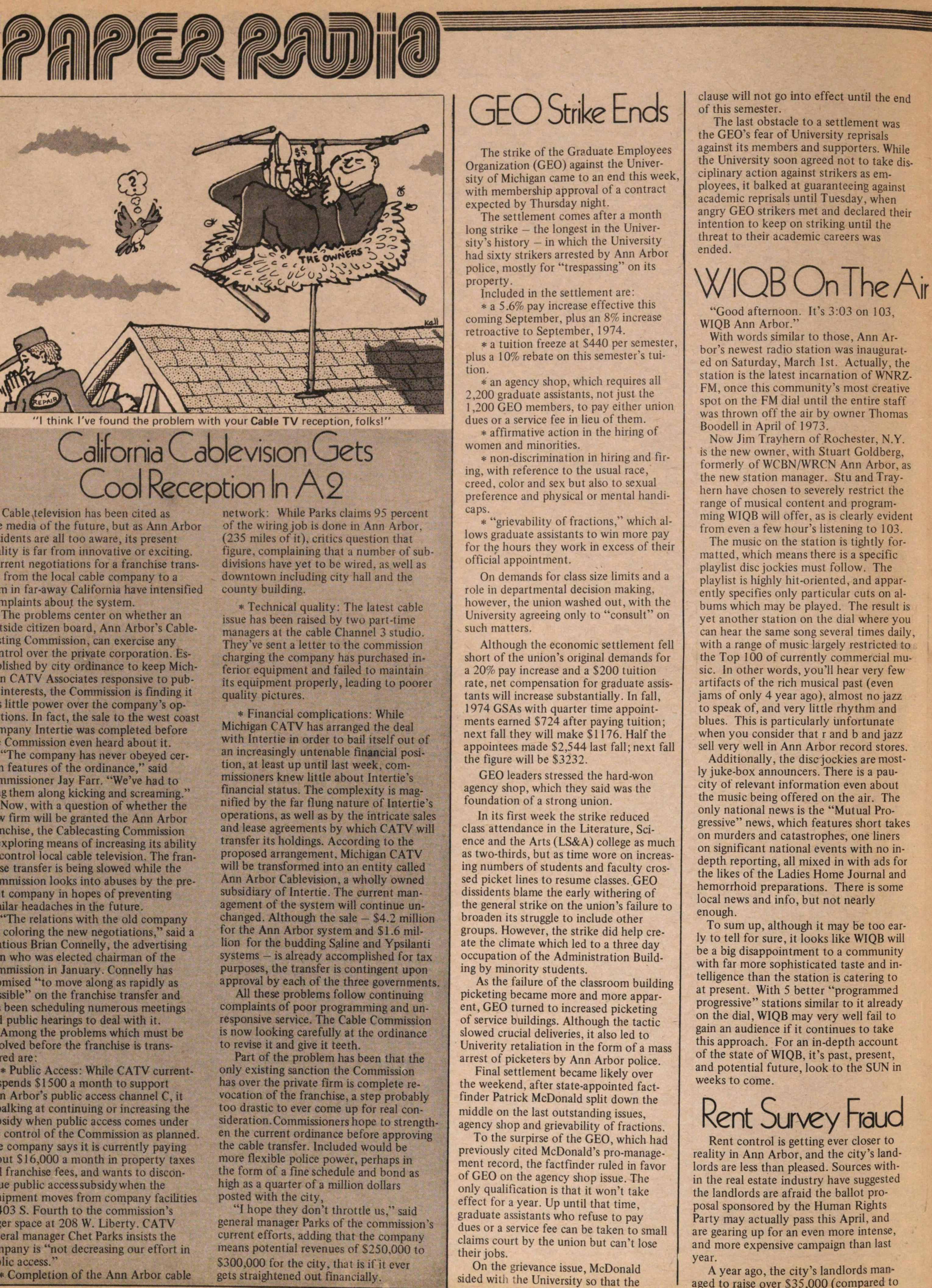 The strike of the Graduate Employees Organization (GEO) against the University of Michigan came to an end this week with membership approval of a contract expected by Thursday night.

The settlement comes after a month long strike - the longest in the University's history - in which the University had sixty strikers arrested by Ann Arbor police, mostly for "trespassing" on its property.

Included in the settlement are:

*a 5.6% pay increase effective this coming September, plus an 8% increase retroactive to September, 1974.

*a tuition freeze at $440 per semester, plus a 10% rebate on this semester's tuition.

*an agency shop, which requires all 2,200 graduate assistants, not just the 1,200 GEO members, to pay either union dues or a service fee in lieu of them.

*affirmative action in the hiring of women and minorities.

*non-discrimination in hiring and firing, with reference to the usual race, creed, color and sex but also to sexual preference and physical or mental handicaps.

*"grievability of fractions," which allows graduate assistants to win more pay for the hours they work in excess of their official appointment.

On demands for class size limits and a role in departmental decision making, however, the union washed out, with the University agreeing only to "consult" on such matters.

Although the economic settlement fell short of the union's original demands for a 20% pay increase and a $200 tuition rate, net compensation for graduate assistants will increase substantially. In fall, 1974 GSAs with quarter time appointments earned $724 after paying tuition; next fall they will make $1176. Half the appointees made $2,544 last fall; next fall the figure will be $3232.

GEO leaders stressed the hard-won agency shop, which they said was the foundation of a strong union.

In its first week the strike reduced class attendance in the Literature, Science and the Arts (LS&A) college as much as two-thirds, but as time wore on increasing numbers of students and faculty crossed picket lines to resume classes. GEO dissidents blame the early withering of the general strike on the union's failure to broaden its struggle to include other groups. However, the strike did help create the climate which led to a three day occupation of the Administration Building by minority students.

As the failure of the classroom building picketing became more and more apparent, GEO turned to increased picketing of service buildings. Although the tactic slowed crucial deliveries, it also led to University retaliation in the form of a mass arrest of picketers by Ann Arbor police.

Final settlement became likely over the weekend, after state-appointed fact-finder Patrick McDonald split down the middle on the last outstanding issues, agency shop and grievability of fractions.

To the surprise of the GEO, which had previously cited McDonald's pro-management record, the fact-finder ruled in favor of GEO on the agency shop issue. The only qualification is that it won't take effect for a year. Up until that time, graduate assistants who refuse to pay dues or a service fee can be taken to small claims court by the union but can't lose their jobs.

On the grievance issue, McDonald sided with the University so that the clause will not go into effect until the end of this semester.

The last obstacle to a settlement was the GEO's fear of University reprisals against its members and supporters. While the University soon agreed not to take disciplinary action against strikers as employees, it balked at guaranteeing against academic reprisals until Tuesday, when angry GEO strikers met and declared their intention to keep on striking until the threat to their academic careers was ended.