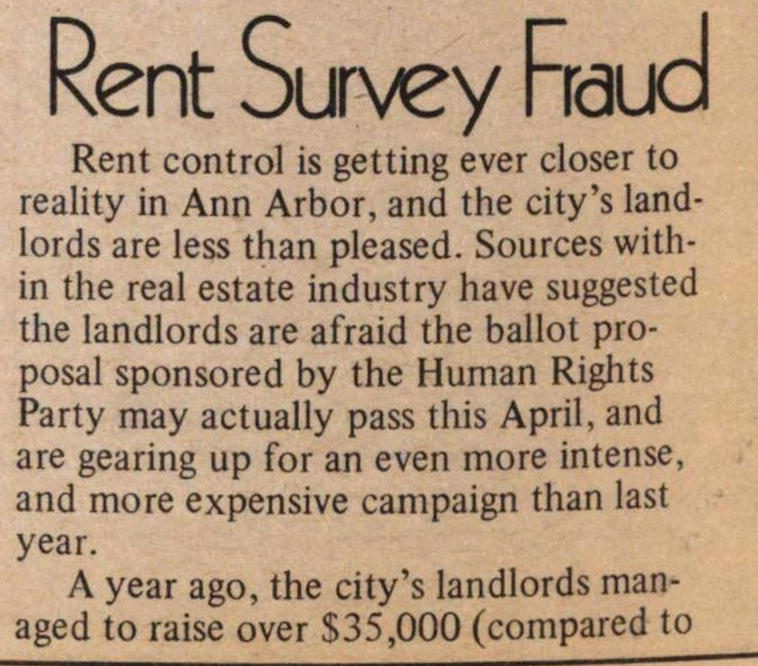 Rent control is getting ever closer to reality in Ann Arbor, and the city's landlords are less than pleased. Sources within the real estate industry have suggested the landlords are afraid the ballot proposal sponsored by the Human Rights Party may actually pass this April, and are gearing up for an even more intense, and more expensive campaign than last year.

A year ago, the city's landlords managed to raise over $35,000 (compared to about $2,000 spent by the HRP) towards the successful defeat of rent control. City voters, influenced by the media blitz scare campaigns rejected the charter amendment by a large margin.

HRP cleaned up the proposal this year, removing many of the areas to which voters had objected. Landlords are looking for new horrors to bring out against a proposal which is guaranteed to lower profits along with rent. One weapon in their current arsenal is a survey done by the American Chamber of Commerce Research Association. As reported in the Ann Arbor News, the survey shows Ann Arbor only ranks 50th out of 161 cities in the housing area. If you accept the survey, housing costs just aren't that high (although no one renting in the city is likely to find that too believable). According to Chamber of Commerce executive director Jack Makeefer, some myths are going to be destroyed by this survey. He pointed to the argument used by rent control supporters that rents are the second highest in the country in the Washtenaw county area, taken from the federal census.

However, what both Makeefer and the Ann Arbor News failed to mention was the costs applied to housing, not specifically to rent. Even more important, according to the survey itself, figures are "keyed to the concept of a middle management executive family of four with an annual income of $18,000 to $20,000." That's not exactly a typical Ann Arbor renter.

While landlords may try to use the survey, the facts do not support the contention that rents aren't high. And after the landlords spend another fortune to defeat rent control, the expense will once again be borne by the renter who will pay for the campaign through increased rent next year, unless rent control passes. If you want to know more about the proposal, or day care and voter registration, there's a public forum Sat., Mar. 16; City Hall, 10 AM.