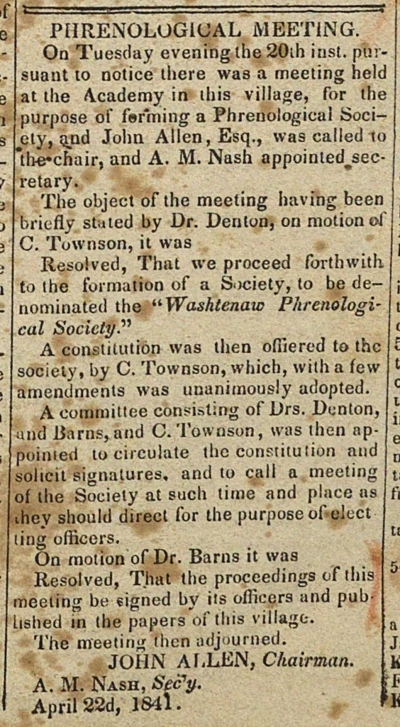 On Tuesday evening the 20th inst. pursuant to notice there was a meeting held at the Academy in this village, for the purpose of forming a Phrenological Society, and John Allen, Esq., was called to the chair, and A. M. Nash appointed secretary. The object of the meeting having been briefly stated by Dr. Denton, on motion of C. Townson, it was Resolved, That we proceed forthwith to the formation of a Society, to be denominated the "Washtenaw Phrenological Society." A constitution was then offered to the society, by C. Townson, which, with a few amendments was unanimously adopted. A committee consisting of Drs. Denton, and Barns, and C.Townson, was then appointed to circulate the constitution and solicit signatures, and to call a meeting of the Society at such time and place as they should direct for the purpose of electing officers. On motion of Dr. Barns it was Resolved, That the proceedings of this meeting be signed by its officers and published in the papers of this village. The meeting then adjourned. JOHN ALLEN, Chairman. A. M. Nash, Sec'y. April 22d, 1841.