Cambodia On The Eve Of Liberation 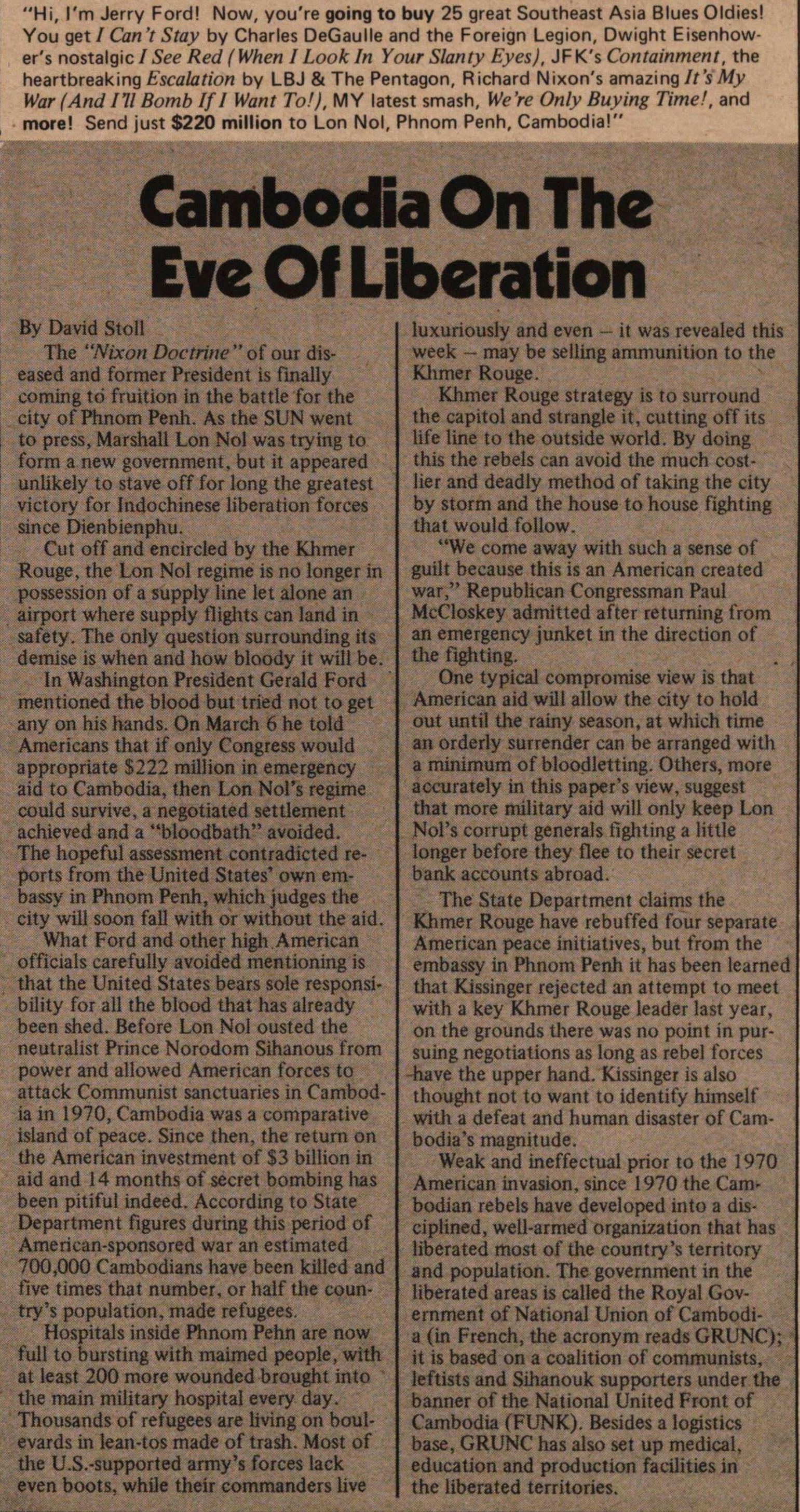 "Hi, l'm Jerry Ford! Now, you're going to buy 25 great Southeast Asia Blues Oldies! You get I Can 't Stay by Charles DeGaulle and the Foreign Legion, Dwight Eisenhower's nostalgic I See Red (When I Look In Your Slanty Eyes), JFK's Containment , the heartbreaking Escalation by LBJ & The Pentagon, Richard Nixon's amazing It's My War (And I'II Bomb If l Want To!), MY latest smash, We're Only Buying Time!, and more! Send just $220 million to Lon Nol, Phnom Penh, Cambodia!"

Cambodia On The Eve Of Liberation

The "Nixon Doctrine " of our diseased and former President is finally coming to fruition in the battle for the city of Phnom Penh. As the SUN went to press, Marshall Lon Nol was trying to form a new government, but it appeared unlikely to stave off for long the greatest victory for indochinese liberation forces since Dienbienphu.

Cut off and encircled by the Khmer Rouge, the Lon Nol regime is no longer in possession of a supply line let alone an airport where supply flights can land in safety. The only question surrounding its demise is when and how bloody it will be.

In Washington President Gerald Ford mentioned the blood but tried not to get any on his hands. On March 6 he told Americans that if only Congress would appropriate $222 million in emergency aid to Cambodia, then Lon Nol's regime could survive, a negotiated settlement achieved and a "bloodbath" avoided. The hopeful assessment contradicted reports from the United States' own embassy in Phnom Penh, which judges the city will soon fall with or without the aid.

What Ford and other high American officials carefully avoided mentioning is that the United States bears sole responsibility for all the blood that has already been shed. Before Lon Nol ousted the neutralist Prince Norodom Sihanous from power and allowed American forces to attack Communist sanctuaries in Cambodia in 1970, Cambodia was a comparative island of peace. Since then, the return on the American investment of $3 billion in aid and 14 months of secret bombing lias been pitiful indeed. According to State Department figures during this period of American-sponsored war an estimated 700,000 Cambodians have been killed and five times that number, or half the country's population, made refugees.

Hospitals inside Phnom Pehn are now full to bursting with maimed people, with at least 200 more wounded brought into the main military hospital every day. Thousands of refugees are living on boulevards in lean-tos made of trash. Most of the U.S.-supported army's forces lack even boots, while their commanders live luxuriously and even - it was revealed this week - may be selling ammunition to the Khmer Rouge.

Khmer Rouge strategy is to surround the capitol and strangle it, cutting off its life line to the outside world. By doing this the rebels can avoid the much costlier and deadly method of taking the city by storm and the house to house fighting that would follow.

"We come away with such a sense of guilt because this is an American created war," Republican Congressman Paul McCloskey adrnitted after returning from an emergency junket in the direction of the fighting.

One typical compromise view is that American aid will allow the city to hold out until the rainy season, at which time an orderly surrender can be arranged with a minimum of bloodletting. Others, more accurately in this paper's view, suggest that more military aid will only keep Lon Nol's corrupt generals fighting a little longer before they flee to their secret bank accounts abroad.

The State Department claims the Khmer Rouge have rebuffed four separate American peace initiatives, but from the embassy in Phnom Penh it has been learned that Kissinger rejected an attempt to meet with a key Khmer Rouge leader last year, on the grounds there was no point in pursuing negotiations as long as rebel forces -have the upper hand. Kissinger is also thought not to want to identify himself with a defeat and human disaster of Cambodia's magnitude.

Weak and ineffectual prior to the 1970 American invasion, since 1970 the Cambodian rebels have developed into a disciplined, well-armed organizaüon that has liberated most of the country's territory and population. The government in the liberated areas is called the Royal Government of National Union of Cambodia (in French, the acronym reads GRUNC); it is based on a coalition of communists, leftists and Sihanouk supporters under the banner of the National United Front of Cambodia (FUNK). Besides a logistics base, GRUNC has also set up medical, education and production facilities in the liberated territories.