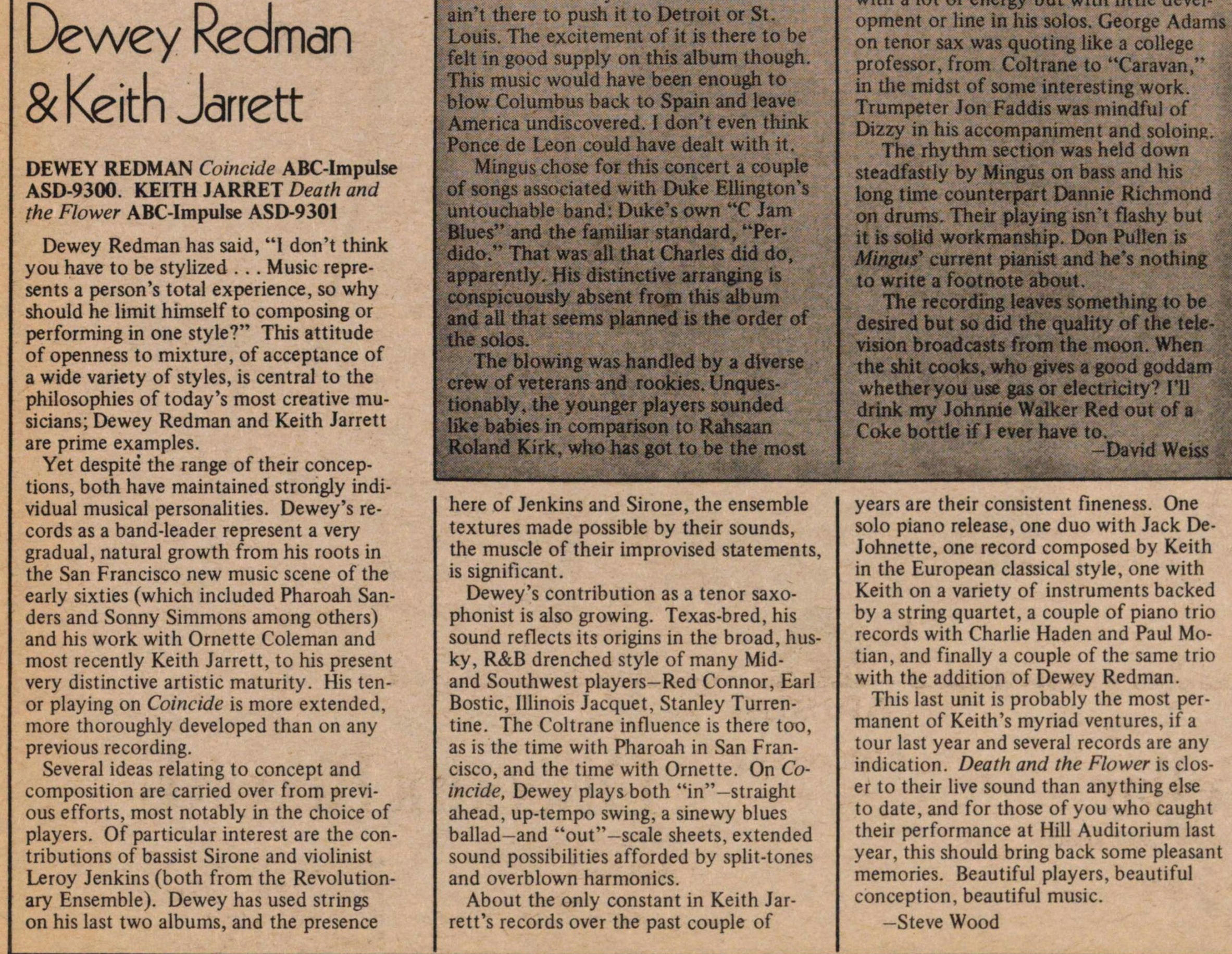 Dewey Redman has said, "I don't think you have to be stylized . . . Music represents a person's total experience, so why should he limit himself to composing or performing in one style?" This attitude of openness to mixture, of acceptance of a wide variety of styles, is central to the philosophies of today's most creative musicians; Dewey Redman and Keith Jarrett are prime examples.

Yet despite the range of their conceptions, both have maintained strongly individual musical personalities. Dewey's records as a band-leader represent a very gradual, natural growth from his roots in the San Francisco new music scene of the early sixties (which included Pharoah Sanders and Sonny Simmons among others) and his work with Ornette Coleman and most recently Keith Jarrett, to his present very distinctive artistic maturity. His tenor playing on Coincide is more extended, more thoroughly developed than on any previous recording.

Several ideas relating to concept and composition are carried over from previous efforts, most notably in the choice of players. Of particular interest are the contributions of bassist Sirone and violinist Leroy Jenkins (both from the Revolutionary Ensemble). Dewey has used strings on his last two albums, and the presence here of Jenkins and Sirone, the ensemble textures made possible by their sounds, the muscle of their improvised statements, is significant.

Dewey's contribution as a tenor saxophonist is also growing. Texas-bred, his sound reflects its origins in the broad, husky, R&B drenched style of many Midland Southwest players- Red Connor, Earl Bostic, Illinois Jacquet, Stanley Turrentine. The Coltrane influence is there too, as is the time with Pharoah in San Francisco, and the time with Ornette. On Coincide, Dewey plays both "in"-straight ahead, up-tempo swing, a sinewy blues ballad- and "out"- scale sheets, extended sound possibilities afforded by split-tones and overblown harmonics.

About the only constant in Keith Jarrett's records over the past couple of years are their consistent fineness. One solo piano release, one duo with Jack DeJohnette, one record composed by Keith in the European classical style, one with Keith on a variety of instruments backed by a string quartet, a couple of piano trio records with Charlie Haden and Paul Motian, and finally a couple of the same trio with the addition of Dewey Redman.

This last unit is probably the most permanent of Keith 's myriad ventures, if a tour last year and several records are any indication. Death and the Flower is closer to their live sound than anything else to date, and for those of you who caught their performance at Hill Auditorium last year, this should bring back some pleasant memories. Beautiful players, beautiful conception, beautiful music.