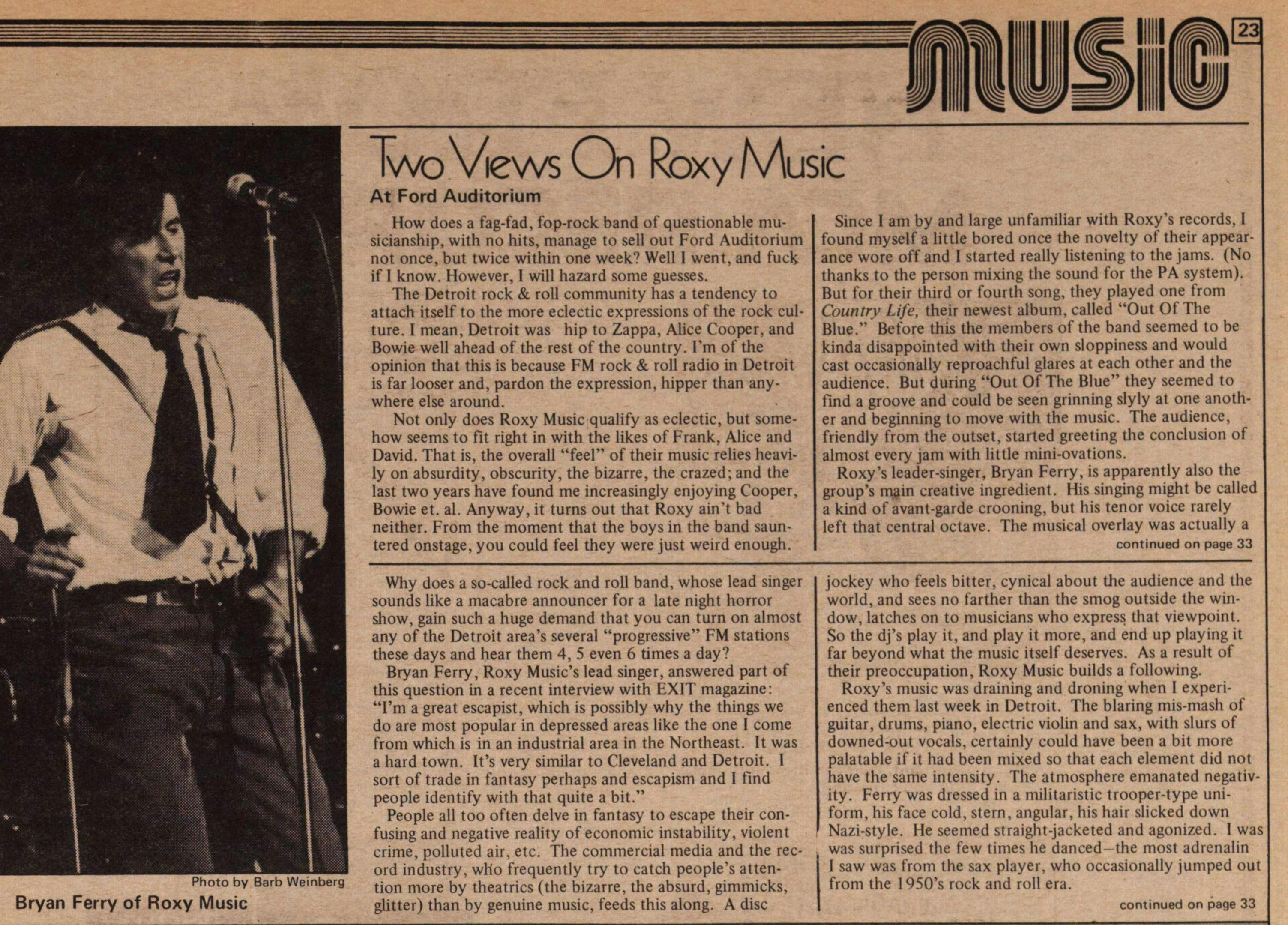 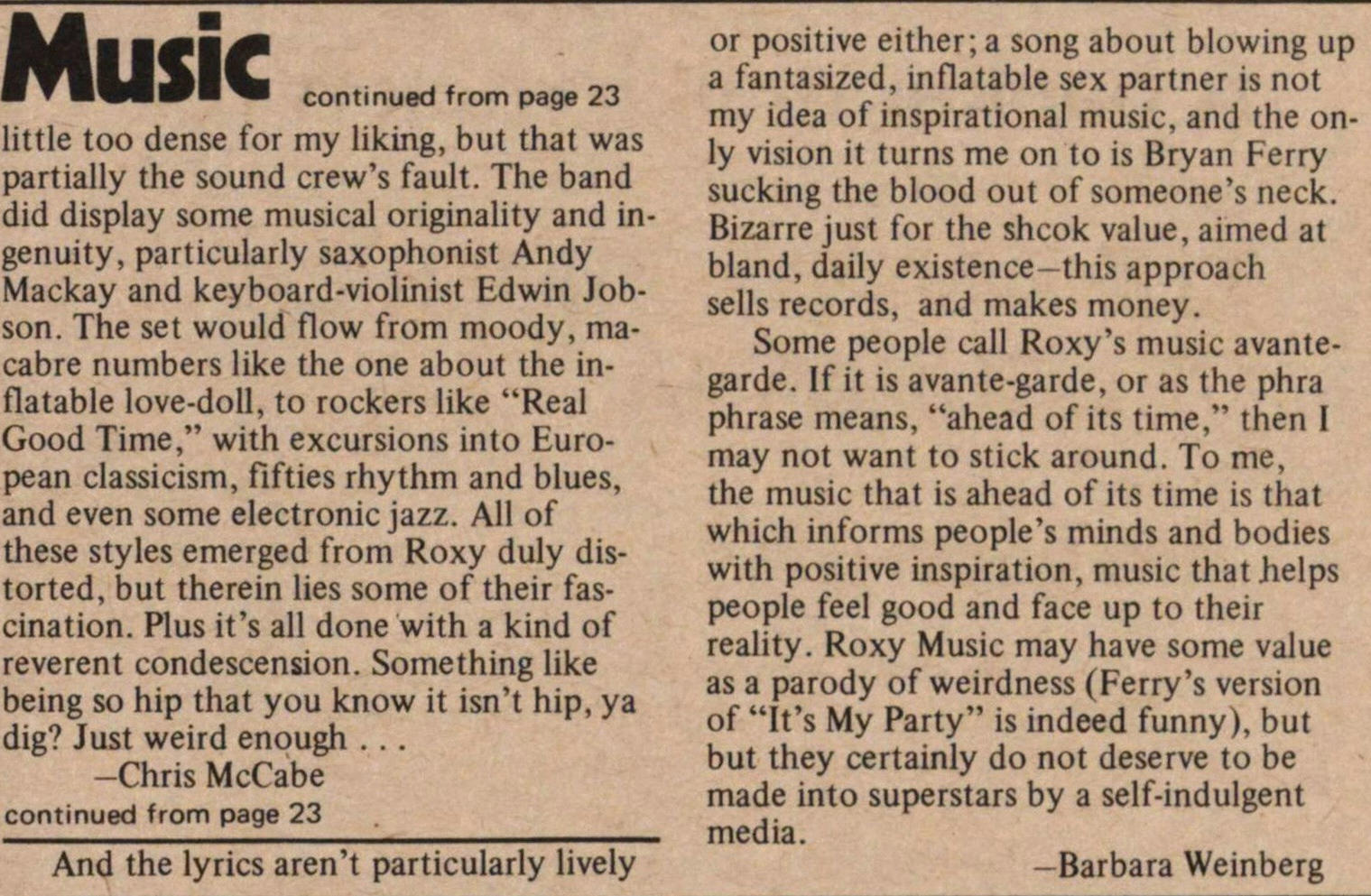 How does a fag-fad, fop-rock band of questionable musicianship, with no hits, manage to sell out Ford Auditorium not once, but twice within one week? Well l went, and fuck if I know. However, I will hazard some guesses.

The Detroit rock & roll community has a tendency to attach itself to the more eclectic expressions of the rock culture. I mean, Detroit was hip to Zappa, Alice Cooper, and Bowie well ahead of the rest of the country. I'm of the opinion that this is because FM rock & roll radio in Detroit is far looser and, pardon the expression, hipper than anywhere else around.

Not only does Roxy Music qualify as eclectic, but somehow seems to fit right in with the likes of Frank, Alice and David. That is, the overall "feel" of their music relies heavily on absurdity, obscurity, the bizarre, the crazed; and the last two years have found me increasingly enjoying Cooper, Bowie et. al. Anyway, it turns out that Roxy ain't bad neither. From the moment that the boys in the band sauntered onstage, you could feel they were just weird enough.

Since I am by and large unfamiliar with Roxy's records, I found myself a little bored once the novelty of their appearance wore off and I started really listening to the jams. (No thanks to the person mixing the sound for the PA system). But for their third or fourth song, they played one from Country Life, their newest album, called "Out Of The Blue." Before this the members of the band seemed to be kinda disappointed with their own sloppiness and would cast occasionally reproachful glares at each other and the audience. But during "Out Of The Blue" they seemed to find a groove and could be seen grinning slyly at one another and beginning to move with the music. The audience, friendly from the outset, started greeting the conclusion of almost every jam with little mini-ovations.

Roxy's leader-singer, Bryan Ferry, is apparently also the group's main creative ingredient. His singing might be called a kind of avant-garde crooning, but his tenor voice rarely left that central octave. The musical overlay was actually a continued on page 33

Why does a so-called rock and roll band, whose lead singer sounds like a macabre announcer for a late night horror show, gain such a huge demand that you can turn on almost any of the Detroit area's several "progressive" FM stations these days and hear them 4, 5 even 6 times a day?

Bryan Ferry, Roxy Music's lead singer, answered part of this question in a recent interview with EXIT magazine: "I'm a great escapist, which is possibly why the things we do are most popular in depressed areas like the one I come from which is in an industrial area in the Northeast. It was a hard town. It's very similar to Cleveland and Detroit. I sort of trade in fantasy perhaps and escapism and I find people identify with that quite a bit."

People all too often delve in fantasy to escape their confusing and negative reality of economic instability, violent crime, polluted air, etc. The commercial media and the record industry, who frequently try to catch people's attention more by theatrics (the bizarre, the absurd, gimmicks, glitter) than by genuine music, feeds this along. A disc jockey who feels bitter, cynical about the audience and the world, and sees no farther than the smog outside the window, latches on to musicians who express that viewpoint. So the dj's play it, and play it more, and end up playing it far beyond what the music itself deserves. As a result of their preoccupation, Roxy Music builds a following.

Roxy's music was draining and droning when I experienced them last week in Detroit. The blaring mis-mash of guitar, drums, piano, electric violin and sax, with slurs of downed-out vocals, certainly could have been a bit more palatable if it had been mixed so that each element did not have the same intensity. The atmosphere emanated negativity. Ferry was dressed in a militaristic trooper-type uniform, his face cold, stern, angular, his hair slicked down Nazi-style. He seemed straight-jacketed and agonized. I was was surprised the few times he danced–the most adrenalin I saw was from the sax player, who occasionally jumped out from the 1950's rock and roll era. continued on page 33

little too dense for my liking, but that was partially the sound crew's fault. The band did display some musical originality and ingenuity, particularly saxophonist Andy Mackay and keyboard-violinist Edwin Jobson. The set would flow from moody, macabre numbers like the one about the inflatable love-doll, to rockers like "Real Good Time," with excursions into European classicism, fifties rhythm and blues, and even some electronic jazz. All of these styles emerged from Roxy duly distorted, but therein lies some of their fascination. Plus it's all done with a kind of reverent condescension. Something like being so hip that you know it isn't hip, ya dig? Just weird enough . . . -Chris McCabe

And the lyrics aren't particularly lively or positive either; a song about blowing up a fantasized, inflatable sex partner is not my idea of inspirational music, and the only vision it turns me on to is Bryan Ferry sucking the blood out of someone's neck. Bizarre just for the shcok value, aimed at bland, daily existence-this approach sells records, and makes money.

Some people cali Roxy's music avante-garde. If it is avante-garde, or as the phra phrase means, "ahead of its time," then I may not want to stick around. To me, the music that is ahead of its time is that which informs people's minds and bodies with positive inspiration, music that helps people feel good and face up to their reality. Roxy Music may have some value as a parody of weirdness (Ferry's version of "It's My Party" is indeed funny), but but they certainly do not deserve to be made into superstars by a self-indulgent media.