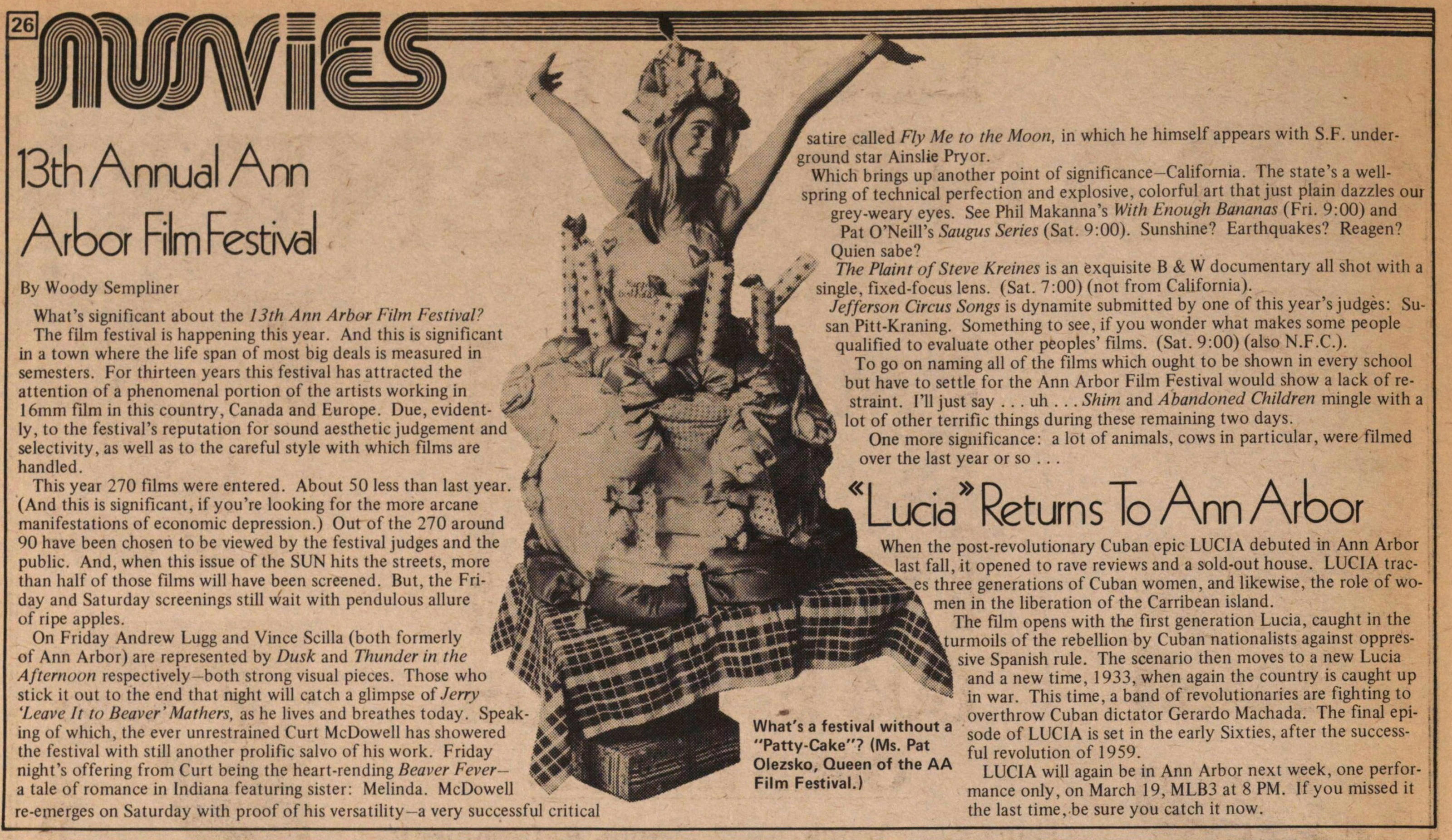 The film festival is happening this year. And this is significant in a town where the life span of most big deals is measured in semesters. For thirteen years this festival has attracted the attention of a phenomenal portion of the artists working in 16mm film in this country, Canada and Europe. Due, evidently, to the festival's reputation for sound aesthetic judgement and selectivity, as well as to the careful style with which films are handled.

This year 270 films were entered. About 50 less than last year (And this is significant, if you're looking for the more arcane manifestations of economic depression.) Out of the 270 around 90 have been chosen to be viewed by the festival judges and the public. And, when this issue of the SUN hits the streets, more than half of those films will have been screened. But, the Friday and Saturday screenings still wait with pendulous allure of ripe apples.

On Friday Andrew Lugg and Vince Scilla (both formerly of Ann Arbor) are represented by Dusk and Thunder in the Afternoon respectively–both strong visual pieces. Those who stick it out to the end that night will catch a glimpse of Jerrv 'Leave it to Beaver' Mathers, as he lives and breathes today. Speaking of which, the ever unrestrained Curt McDowell has showered the festival with still another prolific salvo of his work. Friday night's offering from Curt being the heart-rending Beaver Fever– a tale of romance in Indiana featuring sister: Melinda. McDowell re-emerges on Saturday with proof of his versatility– a very successful critical satire called Fly Me to the Moon, in which he himself appears with S.F. underground star Ainslie Pryor.

The Plaint of Steve Kreines is an exquisite B & W documentary all shot with a single, fixed-focus lens. (Sat. 7:00) (not from California).

Jefferson Circus Songs is dynamite submitted by one of this year's judges: Susan Pitt-Kraning. Something to see, if you wonder what makes some people qualified to evaluate other peoples films. (Sat. 9:00) (also N.F.C)

To go on naming all of the films which ought to be shown in every school but have to settle for the Ann Arbor Film Festival would show a lack of restraint. I'll just say . . . uh . . . Shim and Abandoned Children mingle with a lot of other terrific things during these remaining two days.

One more significance: a lot of animals, cows in particular, were filmed over the last year or so . . .

When the post-revolutionary Cuban epic LUCIA debuted in Ann Arbor last fall, it opened to rave reviews and a sold-out house. LUCIA traces three generations of Cuban women, and likewise, the role of women in the liberation of the Carribean island.

The film opens with the first generation Lucia, caught in the turmoils of the rebellion by Cuban nationalists against oppresisive Spanish rule. The scenario then moves to a new Lucia and a new time, 1933, when again the country is caught up in war. This time, a band of revolutionaries are fighting to overthrow Cuban dictator Gerardo Machada. The final episode of LUCIA is set in the early Sixties, after the successful revolution of 1959.

LUCIA will again be in Ann Arbor next week, one performance only, on March 19, MLB3 at 8 PM. If you missed it the last time, be sure you catch it now.