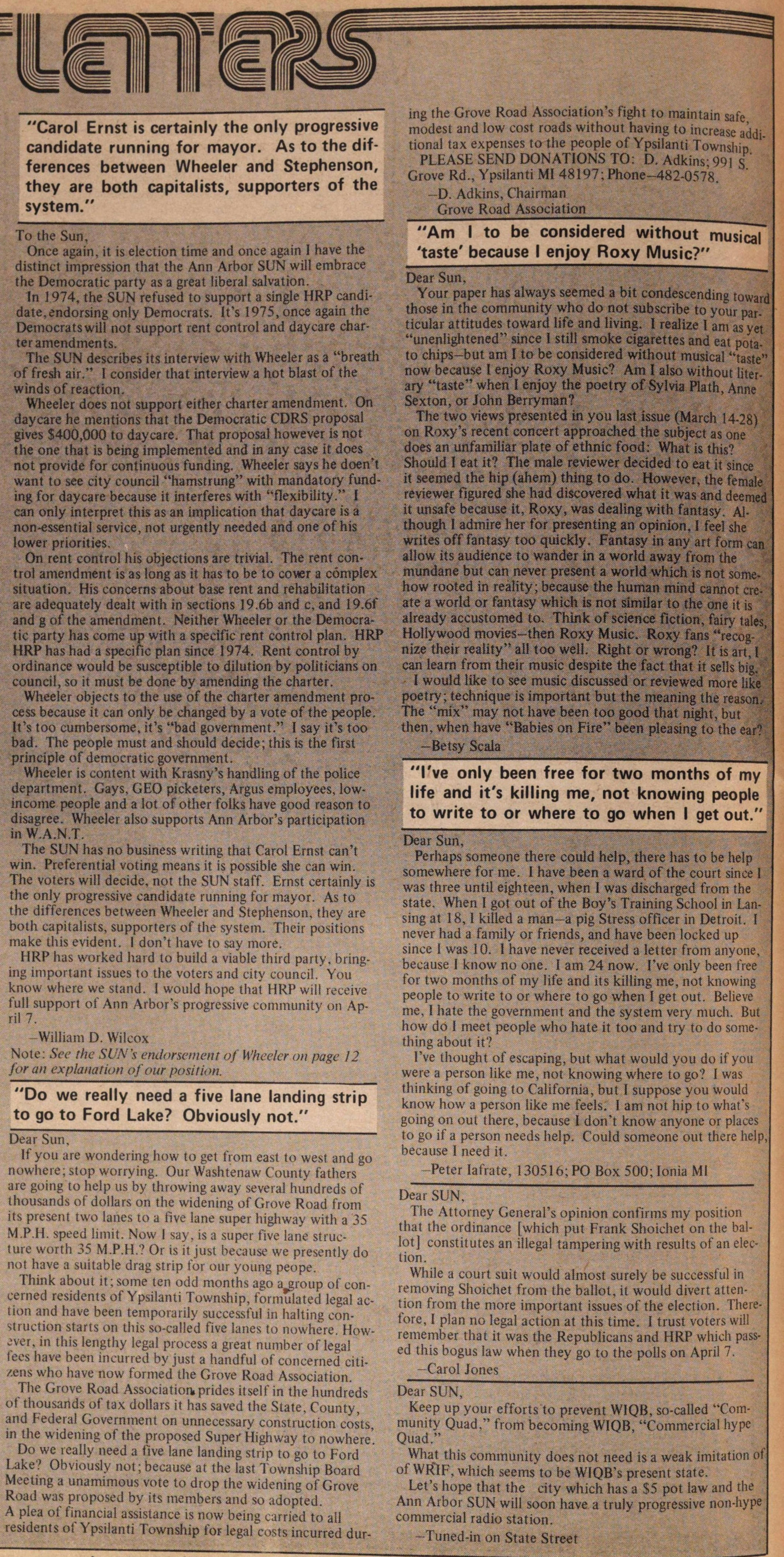 "Carol Ernst is certainly the only progressive candidate running for mayor. As to the differences between Wheeler and Stephenson, they are both capitalists, supporters of the system."

Once again, it is election time and once again I have the distinct impression that the Ann Arbor SUN will embrace the Democratic party as a great liberal salvation. In 1974, the SUN refused to support a single HRP candidate, endorsing only Democrats. It's 1975, once again the Democrats will not support rent control and daycare charter amendments. The SUN describes its interview with Wheeler as a "breath of fresh air." I consider that interview a hot blast of the winds of reaction. Wheeler does not support either charter amendment. On daycare he mentions that the Democratic CDRS proposal gives $400,000 to daycare. That proposal however is not the one that is being implemented and in any case it does not provide for continuous funding. Wheeler says he doesn't want to see city council "hamstrung" with mandatory funding for daycare because it interferes with "flexibility." I can only interpret this as an implication that daycare is a non-essential service, not urgently needed and one of his lower priorities. On rent control his objections are trivial. The rent control amendment is as long as it has to be to cover a complex situation. His concerns about base rent and rehabilitation are adequately dealt with in sections 19.6b and c, and 19.6f and g of the amendment. Neither Wheeler or the Democratic party has come up with a specific rent control plan. HRP has had a specific plan since 1974. Rent control by ordinance would be susceptible to dilution by politicians on council, so it must be done by amending the charter. Wheeler objects to the use of the charter amendment process because it can only be changed by a vote of the people. It's too cumbersome, it's "bad government." I say it's too bad. The people must and should decide; this is the first principle of democratic government. Wheeler is content with Krasny's handling of the police department. Gays, GEO picketers, Argus employees, low-income people and a lot of other folks have good reason to disagree. Wheeler also supports Ann Arbor's participation in W.A.N.T. The SUN has no business writing that Carol Ernst can't win. Preferential voting means it is possible she can win. The voters will decide, not the SUN staff. Ernst certainly is the only progressive candidate running for mayor. As to the differences between Wheeler and Stephenson, they are both capitalists, supporters of the system. Their positions make this evident. I don't have to say more. HRP has worked hard to build a viable third party, bringing important issues to the voters and city council. You know where we stand. I would hope that HRP will receive full support of Ann Arbor's progressive community on April 7.

Note: See the SUN's endorsement of Wheeler on page 12 for an explanation of our position.

"Do we really need a five lane landing strip to go to Ford Lake? Obviously not."

If you are wondering how to get from east to west and go nowhere; stop worrying. Our Washtenaw County fathers are going to help us by throwing away several hundreds of thousands of dollars on the widening of Grove Road from its present two lanes to a five lane super highway with a 35 M.P.H, speed limit. Now I say, is a super five lane structure worth 35 M.P.H.? Or is it just because we presently do not have a suitable drag strip for our young people. Think about it; some ten odd months ago a group of concerned residents of Ypsilanti Township, formulated legal action and have been temporarily successful in halting construction starts on this so-called five lanes to nowhere. However, in this lengthy legal process a great number of legal fees have been incurred by just a handful of concerned citizens who have now formed the Grove Road Association. The Grove Road Association prides itself in the hundreds of thousands of tax dollars it has saved the State, County, and Federal Government on unnecessary construction costs in the widening of the proposed Super Highway to nowhere. Do we really need a five lane landing strip to go to Ford Lake? Obviously not; because at the last Township Board Meeting a unanimous vote to drop the widening of Grove Road was proposed by its members and so adopted. A plea of financial assistance is now being carried to all residents of Ypsilanti Township for legal costs incurred during the Grove Road Association's fight to maintain safe, modest and low cost roads without having to increase additional tax expenses to the people of Ypsilanti Township PLEASE SEND DONATIONS TO: D. ADKINS 991 S Grove Rd., Ypsilanti MI 48197; Phone-482-0578.

"Am I to be considered without musical 'taste' because I enjoy Roxy Music?"

Your paper has always seemed a bit condescending toward those in the community who do not subscribe to your particular attitudes toward life and living, l realize I am as yet "unenlightened" since I still smoke cigarettes and eat potato chips-but am I to be considered without musical "taste" now because l enjoy Roxy Music? Am I also without literary "taste" when I enjoy the poetry of Sylvia Plath, Anne Sexton, or John Berryman? The two views presented in you last issue (March 14-28) on Roxy's recent concert approached the subject as one does an unfamiliar plate of ethnic food: What is this? Should I eat it? The male reviewer decided to eat it since it seemed the hip (ahem) thing to do. However, the female reviewer figured she had discovered what it was and deemed it unsafe because it, Roxy, was dealing with fantasy. Although I admire her for presenting an opinion, I feel she writes off fantasy too quickly. Fantasy in any art form can allow its audience to wander in a world away from the mundane but can never present a world which is not somehow rooted in reality; because the human mind cannot create a world or fantasy which is not similar to the one it is already accustomed to. Think of science fiction, fairy tales, Hollywood movies--then Roxy Music. Roxy fans "recognize their reality" all too well. Right or wrong? It is art, I can learn from their music despite the fact that it sells big. I would like to see music discussed or reviewed more like poetry; technique is important but the meaning the reason. The "mix" may not have been too good that night, but then, when have "Babies on Fire" been pleasing to the ear? - Betsy Scala

"I've only been free for two months of my life and it's killing me, not knowing people to write to or where to go when I get out."

Perhaps someone there could help, there has to be help somewhere for me. I have been a ward of the court since I was three until eighteen, when I was discharged from the state. When I got out of the Boy's Training School in Lansing at 18, ! killed a man-a pig Stress officer in Detroit. I never had a family or friends, and have been locked up since I was 10. I have never received a letter from anyone, because I know no one. I am 24 now. I've only been free for two months of my life and its killing me, not knowing people to write to or where to go when I get out. Believe me, I hate the government and the system very much. But how do I meet people who hate it too and try to do something about it? I've thought of escaping, but what would you do if you were a person like me, not knowing where to go? I was thinking of going to California, but I suppose you would know how a person like me feels. I am not hip to what's going on out there, because I don't know anyone or places to go if a person needs help. Could someone out there help, because I need it.

The Attorney General's opinion confirms my position that the ordinance [which put Frank Shoichet on the ballot] constitutes an illegal tampering with results of an election. While a court suit would almost surely be successful in removing Shoichet from the ballot, it would divert attention from the more important issues of the election. Therefore, I plan no legal action at this time. I trust voters will remember that it was the Republicans and HRP which passed this bogus law when they go to the polls on April 7.

Keep up your efforts to prevent WIQB, so-called "Community Quad," from becoming WIQB, "Commercial hype Quad." What this community does not need is a weak imitation of of WRIF, which seems to be WIQB's present state. Let's hope that the city which has a $5 pot law and the Ann Arbor SUN will soon have a truly progressive non-hype commercial radio station.