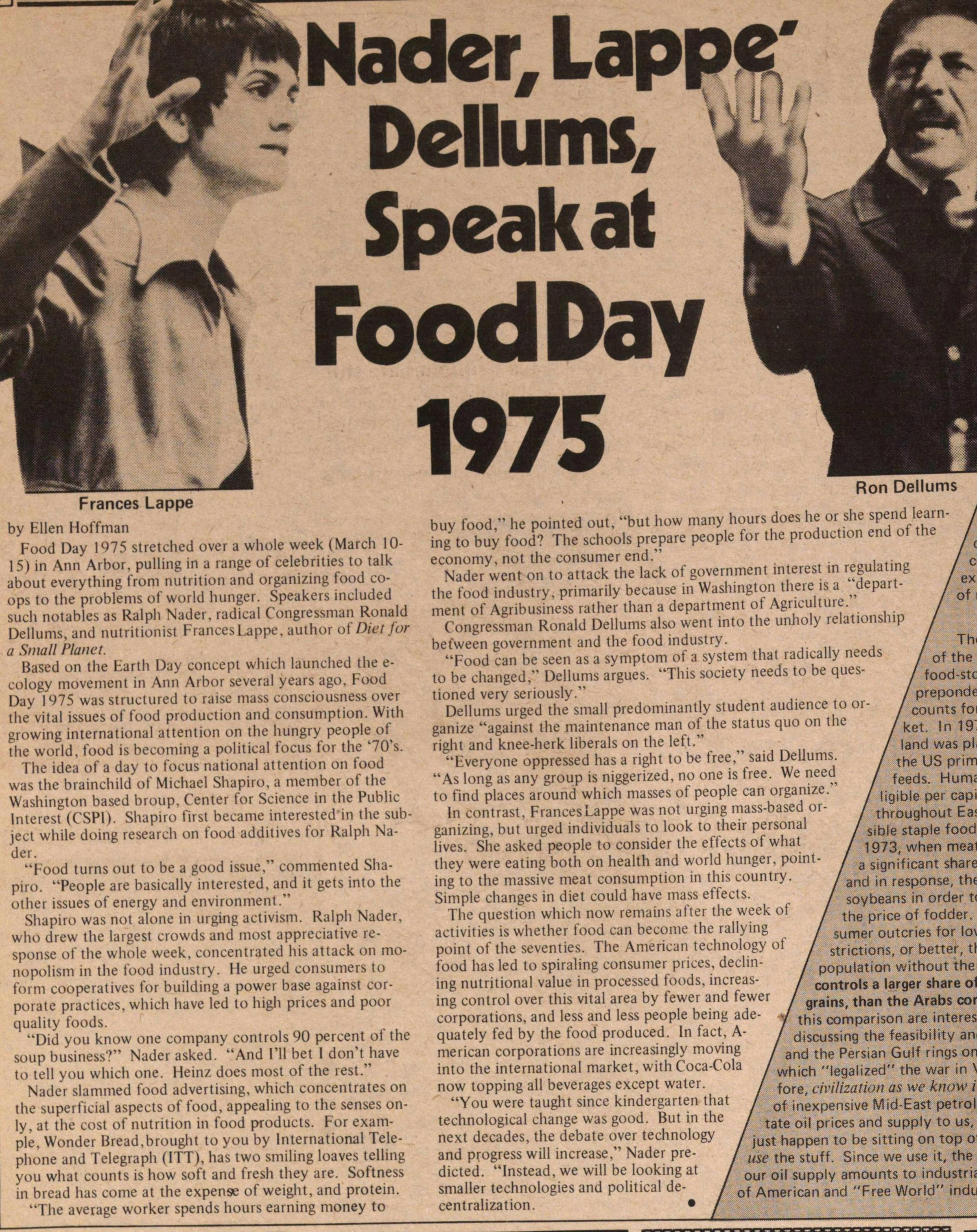 Food Day 1975 stretched over a whole week (March 10-15) in Ann Arbor, pulling in a range of celebrities to talk about everything from nutrition and organizing food co-ops to the problems of world hunger. Speakers included Such notables as Ralph Nader, radical Congressman Ronald Dellums, and nutritionist Frances Lappe, author of Diet for a Small Planet.

Based on the Earth Day concept which launched the ecology movement in Ann Arbor several years ago, Food Day 1975 was structured to raise mass consciousness over the vital issues of food production and consumption. With growing international at tent ion on the hungry people of the world, food is becoming a political focus for the '70's.

The idea of a day to focus national attention on food was the brainchild of Michael Shapiro, a member of the Washington based broup, Center for Science in the Public Interest (CSPI). Shapiro first became interested in the subject while doing research on food additives for Ralph Nader.

"Food turns out to be a good issue," commented Shapiro. "People are basically interested, and it gets into the other issues of energy and environment."

Shapiro was not alone in urging activism. Ralph Nader, who drew the largest crowds and most appreciative response of the whole week, concentrated his attack on monopolism in the food industry. He urged consumers to form cooperatives for building a power base against corporate practices, which have led to high prices and poor quality foods.

"Did you know one company controls 90 percent of the soup business?" Nader asked. "And l'll bet I don't have to tell you which one. Heinz does most of the rest."

Nader slammed food advertising, which concentrates on the superficial aspects of food, appealing to the senses only, at the cost of nutrition in food products. For example, Wonder Bread, brought to you by International Telephone and Telegraph (ITT), has two smiling loaves telling you what counts is how soft and fresh they are. Softness in bread has come at the expense of weight, and protein.

"The average worker spends hours earning money to buy food," he pointed out, "but how many hours does he or she spend learning to buy food? The schools prepare people for the production end of the economy, not the consumer end."

"Food can be seen as a symptom of a system that radically needs to be changed," Dellums argues. "This society needs to be questioned very seriously."

Dellums urged the small predominantly student audience to organize "against the maintenance man of the status quo on the right and knee-herk liberals on the left."

"Everyone oppressed has a right to be tree, said Dellums. "As long as any group is niggerized, no one is free. We need to find places around which masses of people can organize.

In contrast, Frances Lappe was not urging mass-based organizing, but urged individuals to look to their personal lives. She asked people to consider the effects of what they were eating both on health and world hunger, pointing to the massive meat consumption in this country. Simple changes in diet could have mass effects.

The question which now remains after the week of activities is whether food can become the rallying point of the seventies. The American technology of food has led to spiraling consumer prices, declining nutritional value in processed foods, increasing control over this vital area by fewer and fewer corporations, and less and less people being adequately fed by the food produced. In fact, American corporations are increasingly moving into the international market, with Coca-Cola now topping all beverages except water.

"You were taught since kindergarten that technological change was good. But in the next decades, the debate over technology and progress will increase," Nader predicted. "Instead, we will be looking at smaller technologies and political centralization. "