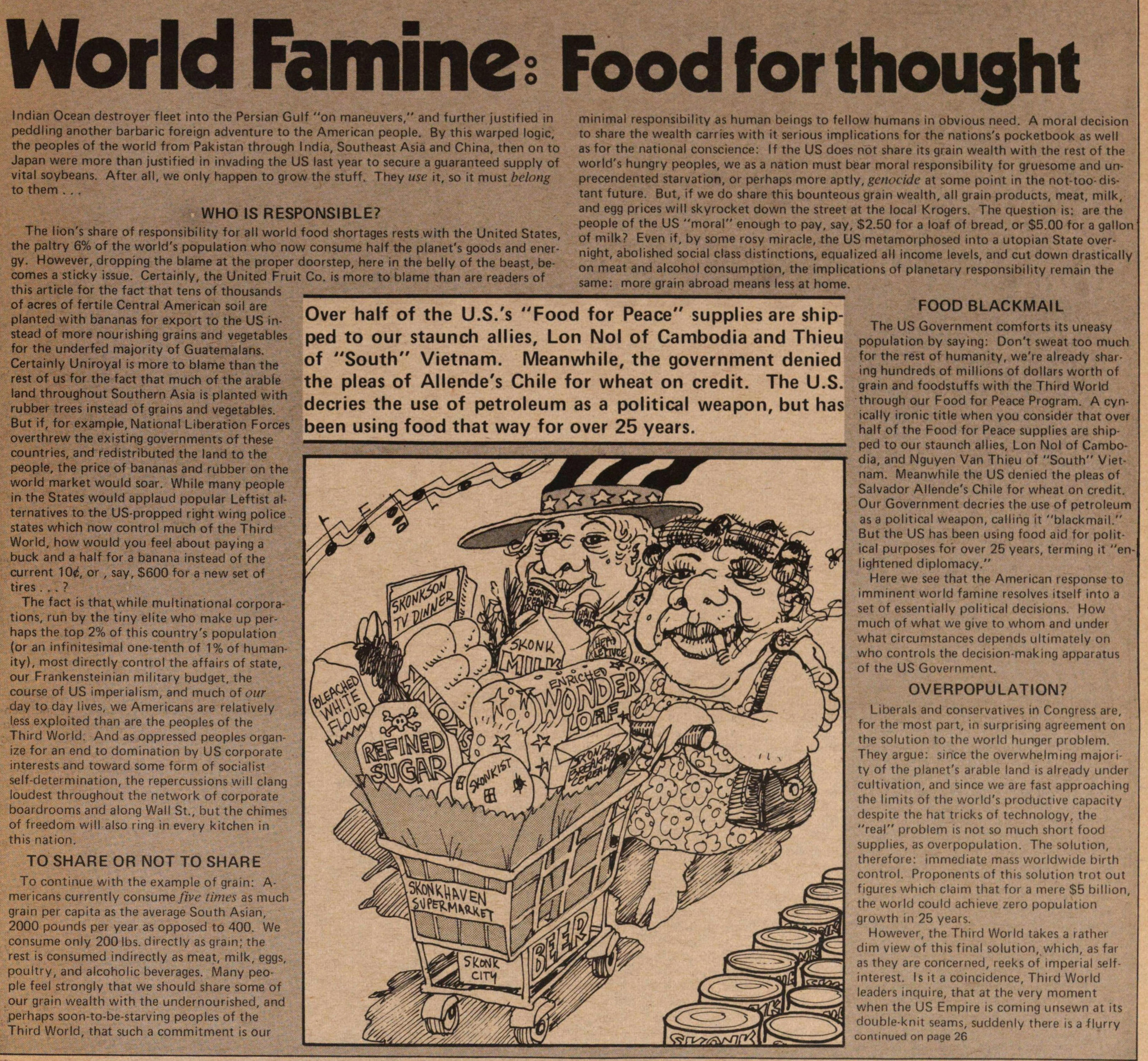 (Editor's Note: This article appears as a reflection on Food Week.)

The United States exerts an indisputable strangle-hold over world food supply, and therefore controls the very survival of the human race. The accepted, civics book wisdom places the US in its preeminent position  among nations for its top ranked industrial might, specifically its military hardware, automotive industry, and electronic gadgetry. This respected assumption is, as they say, no longer operative. Today, this country's largest exports are not finished industrial goods, but agricultural products, especially grains and soybeans. The US is the world's largest exporter of wheat, corn, rice, and soybeans. Decisions this country makes about how much of what to export to whom directly affects the survival of many of the planet's peoples.

SOYBEANS AND OIL The case of soybeans is particularly illustrative of the choke-hold in which the US grips the world food-stores. The US produces the overwhelming preponderance of the Earth's soybean crop, and accounts for 85% of soybean exports to the world market. In 1973, one out of every six acres of US farmland was planted with soybeans. Soybeans are used in the US primarily for high-protein cattle and poultry feeds. Human consumption, while rising, remains negligible per capita. However, for over one billion people throughout East and South Asia, soybeans are an indispensable staple food, and a prime source of essential protein. In 1973, when meat prices skyrocketed here, cattlemen blamed a significant share of the increase on the higher cost of feed, and in response, the US clamped heavy export restrictions on soybeans in order to glut the domestic market, and force down the price of fodder. This move was politically dictated by consumer outcries for lower meat prices. Meanwhile, the export restrictions, or better, the embargo, left one-quarter of the world's population without their major source of protein. The United States controls a larger share of the world's exportable soybeans and all grains than the Arabs control exportable oil! The implications of this comparison are interesting. Currently, the media space devoted to discussing the feasibility and/or the necessity of invading Saudi Arabia and the Persian Gulf rings ominously of the Gulf of Tonkin resolution, which "legalized" the war in Vietnam. The theory is: the US (and therefore civilization as we know it) cannot survive without an assured supply of inexpensive Mid-East petroleum. So who are these pesky Arabs to dictate oil prices and supply to us, the most powerful nation on earth? They just happen to be sitting on top of the planet's petroleum reserves, while we use the stuff. Since we use it, the oil really belongs to us, and their restricting our oil supply amounts to industriacide. Therefore, to keep the mighty wheels of American and "Free World" industry spinning, we are justified in sending the Indian Ocean destroyer fleet into the Persian Gulf "on maneuvers," and further justified in peddling another barbaric foreign adventure to the American people. By this warped logic, the peoples of the world from Pakistan through India, Southeast Asia and China, then on to Japan were more than justified in invading the US last year to secure a guaranteed supply of vital soybeans. After all, we only happen to grow the stuff. They use it, so it must belong to them . . .

WHO IS RESPONSIBLE? The lion's share of responsibility for all world food shortages rests with the United States, the paltry 6% of the world's population who now consume half the planet's goods and energy. However, dropping the blame at the proper doorstep, here in the belly of the beast, becomes a sticky issue. Certainly, the United Fruit Co. is more to blame than are readers of this article for the fact that tens of thousands of acres of fertile Central American soil are planted with bananas for export to the US instead of more nourishing grains and vegetables for the underfed majority of Guatemalans. Certainly Uniroyal is more to blame than the rest of us for the fact that much of the arable land throughout Southern Asia is planted with rubber trees instead of grains and vegetables. But if, for example, National Liberation Forces overthrew the existing governments of these countries, and redistributed the land to the people, the price of bananas and rubber on the world market would soar. While many people in the States would applaud popular Leftist alternatives to the US-propped right wing police states which now control much of the Third World, how would you feel about paying a buck and a half for a banana instead of the current 10, or, say, $600 for a new set of tires . . . ? The fact is that, while multinational corporations, run by the tiny elite who make up perhaps the top 2% of this country's population (or an infinitesimal one-tenth of 1% of humanity), most directly control the affairs of state, our Frankensteintan military budget, the course of US imperialism, and much of our day to day lives, we Americans are relatively less exploited than are the peoples of the Third World. And as oppressed peoples organize for an end to domination by US corporate interests and toward some form of socialist self-determination, the repercussions will clang loudest throughout the network of corporate boardrooms and along Wall St., but the chimes of freedom will also ring in every kitchen in this nation.

TO SHARE OR NOT TO SHARE To continue with the example of grain: Americans currently consume five times as much grain per capita as the average South Asian, 2000 pounds per year as opposed to 400. We consume only 200 Ibs. directly as grain; the rest is consumed indirectly as meat, milk, eggs, poultry, and alcoholic beverages. Many people feel strongly that we should share some of our grain wealth with the undernourished, and perhaps soon-to-be-starving peoples of the Third World, that such a commitment is our minimal responsibility as human beings to fellow humans in obvious need. A moral decision to share the wealth carries with it serious implications for the nation's pocketbook as well as for the national conscience: If the US does not share its grain wealth with the rest of the world's hungry peoples, we as a nation must bear moral responsibility for gruesome and unprecedented starvation, or perhaps more aptly, genocide at some point in the not-too-distant future. But, if we do share this bounteous grain wealth, all grain products, meat, milk, and egg prices will skyrocket down the street at the local Krogers. The question is: are the people of the US "moral" enough to pay, say, $2.50 for a loaf of bread, or $5.00 for a gallon of milk? Even if, by some rosy miracle, the US metamorphosed into a utopian State overnight, abolished social class distinctions, equalized all income levels, and cut down drastically on meat and alcohol consumption, the implications of planetary responsibility remain the same: more grain abroad means less at home.

FOOD BLACKMAIL The US Government comforts ts uneasy population by saying: Don't sweat too much for the rest of humanity, we're already sharing hundreds of millions of dollars worth of grain and foodstuffs with the Third World through our Food for Peace Program. A cynically ironic title when you consider that over half of the Food for Peace supplies are shipped to our staunch allies, Lon Nol of Cambodia, and Nguyen Van Thieu of "South" Vietnam. Meanwhile the US denied the pleas of Salvador Allende's Chile for wheat on credit. Our Government decries the use of petroleum as a political weapon, calling it "blackmail." But the US has been using food aid for political purposes for over 25 years, terming it "enlightened diplomacy." Here we see that the American response to imminent world famine resolves itself into a set of essentially political decisions. How much of what we give to whom and under what circumstances depends ultimately on who controls the decision-making apparatus of the US Government.

OVERPOPULATION? Liberals and conservatives in Congress are, for the most part, in surprising agreement on the solution to the world hunger problem. They argue: since the overwhelming majority of the planet's arable land is already under cultivation, and since we are fast approaching the limits of the world's productive capacity despite the hat tricks of technology, the "real" problem is not so much short food supplies, as overpopulation. The solution, therefore: immediate mass worldwide birth control. Proponents of this solution trot out figures which claim that for a mere $5 billion, the world could achieve zero population growth in 25 years. However, the Third World takes a rather dim view of this final solution, which, as far as they are concerned, reeks of imperial self-interest. Is it a coincidence, Third World leaders inquire, that at the very moment when the US Empire is coming unsewn at its doubleknit seams, suddenly there is a flurry... continued on page 26