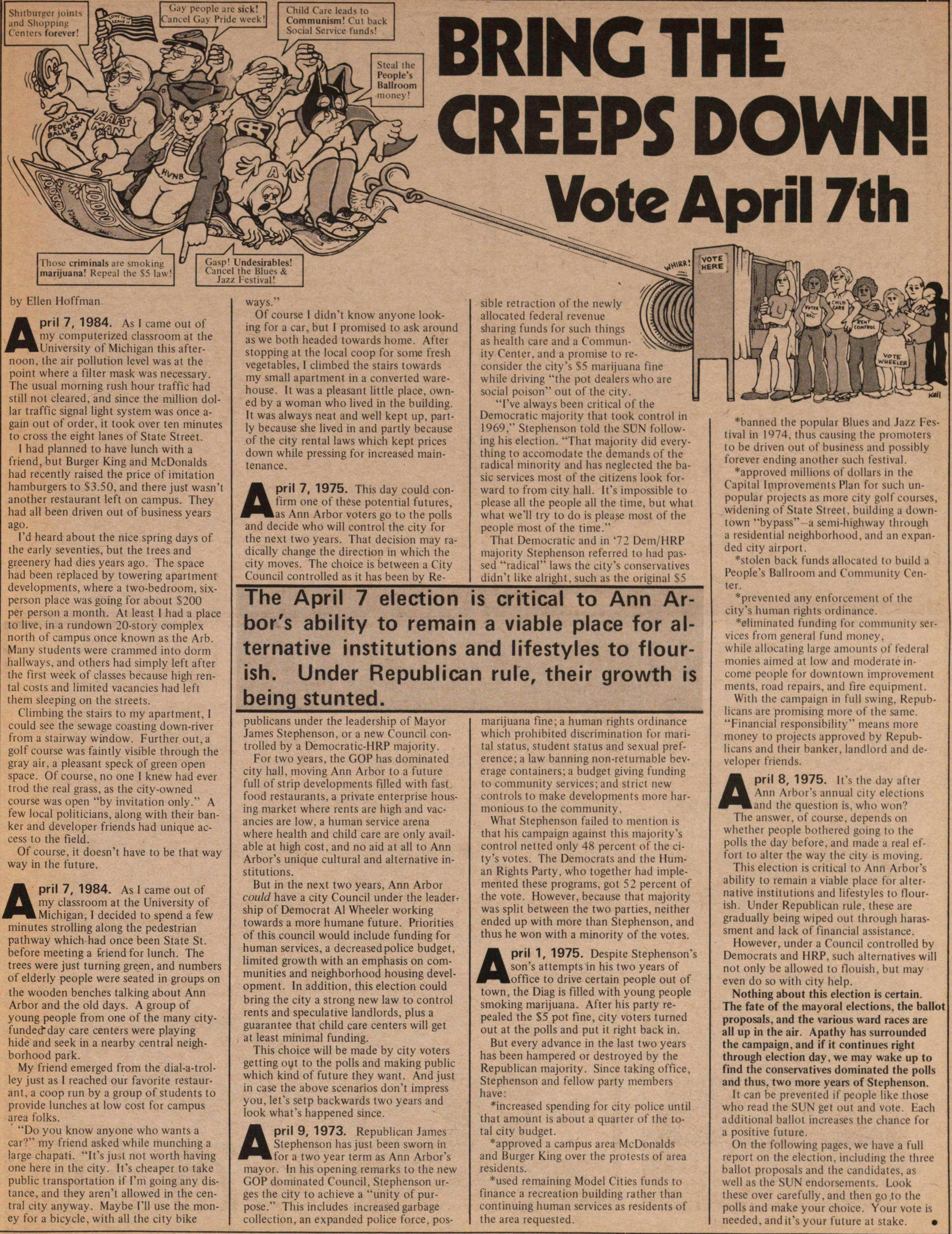 Bring the Creeps Down!

April 7, 1984. As I came out of my computerized classroom at the University of Michigan this afternoon, the air pollution level was at the point where a filter mask was necessary. The usual morning rush hour traffic had still not cleared, and since the million dollar traffic signal light system was once again out of order, it took over ten minutes to cross the eight lanes of State Street.

l had planned to have lunch with a friend, but Burger King and McDonalds had recently raised the price of imitation hamburgers to $53.50, and there just wasn't another restaurant left on campus. They had all been driven out of business years ago.

I'd heard about the nice spring days of the early seventies, but the trees and greenery had dies years ago. The space had been replaced by towering apartment developments, where a two-bedroom, six person place was going for about $200 per person a month. At least I had a place to live, in a rundown 20-story complex north of campus once known as the Arb. Many students were crammed into dorm hallways, and others had simply left after the first week of classes because high rental costs and limited vacancies had left them sleeping on the streets.

Climbing the stairs to my apartment, I could see the sewage coasting down-river from a stairway window. Further out. a golf course was faintly visible through the gray air, a pleasant speck of green open space. Of course, no one I knew had ever trod the real grass. as the city-owned course was open "by invitation only." A few local politicians, along with their banker and developer friends had unique access to the field.

Of course, it doesn't have to be that way way in the future.

April 7, 1984. As I came out of my classroom at the University of Michigan, I decided to spend a few minutes strolling along the pedestrian pathway which had once been State St. before meeting a friend for lunch. The trees were just turning green, and numbers of elderly people were seated in groups on the wooden benches talking about Ann Arbor and the old days. A group of young people from one of the many city funded day care centers were playing hide and seek in a nearby central neighborhood park.

My friend emerged from the dial-a-trolley just as I reached our favorite restaurant, a coop run by a group of students to provide lunches at low cost for campus area folks.

"Do you know anyone who wants a car?" my friend asked while munching a large chapati. "It's just not worth having one here in the city. It's cheaper to take public transportation if I'm going any distance, and they aren't allowed in the central city anyway. Maybe I'll use the money for a bicycle, with all the city bike ways."

Of course I didn't know anyone looking for a car, but I promised to ask around as we both headed towards home. After stopping at the local coop for some fresh vegetables, I climbed the stairs towards my small apartment in a converted warehouse. It was a pleasant little place, owned by a woman who lived in the building. It was always neat and well kept up, partly because she lived in and partly because of the city rental laws which kept prices down while pressing for increased maintenance.

April 7, 1975. This day could confirm one of these potential futures, as Ann Arbor voters go to the polls and decide who will control the city for the next two years. That decision may radically change the direction in which the city moves. The choice is between a City Council controlled as it has been by Republicans under the leadership of Mayor James Stephenson, or a new Council controlled by a Democratic-HRP majority.

For two years, the GOP has dominated city hall, moving Ann Arbor to a future full of strip developments filled with fast food restaurants, a private enterprise housing market where rents are high and vacancies are low, a human service arena where health and child care are only available at high cost, and no aid at all to Ann Arbor's unique cultural and alternative institutions.

But in the next two years, Ann Arbor could have a city Council under the leadership of Democrat Al Wheeler working towards a more humane future. Priorities of this council would include funding for human services, a decreased police budget, limited growth with an emphasis on communities and neighborhood housing development.

In addition, this election could bring the city a strong new law to control rents and speculative landlords, plus a guarantee that child care centers will get at least minimal funding. This choice will be made by city voters getting out to the polls and making public which kind of future they want. And just in case the above scenarios don't impress you, let's step backwards two years and look what's happened since.

April 9, 1973. Republican James Stephenson has just been sworn in for a two year term as Ann Arbor's mayor. In his opening remarks to the new GOP dominated Council, Stephenson urges the city to achieve a "unity of purpose." This includes increased garbage collection, an expanded police force, possible retraction of the newly allocated federal revenue sharing funds for such things as health care and a Community Center, and a promise to consider the city's $5 marijuana fine while driving "the pot dealers who are social poison" out of the city.

"I've always been critical of the Democratic majority that took control in 1969," Stephenson told the SUN following his election. "That majority did everything to accomodate the demands of the radical minority and has neglected the basic services most of the citizens look forward to from city hall. It's impossible to please all the people all the time, but what what we'll try to do is please most of the people most of the time."

That Democratic and in '72 Dem/HRP majority Stephenson referred to had passed "radical" laws the city's conservatives didn't like alright, such as the original $5 marijuana fine; a human rights ordinance which prohibited discrimination for marital status, student status and sexual preference; a law banning non-returnable beverage containers; a budget giving funding lo community services; and strict new controls to make developments more harmonious to the community.

What Stephenson failed to mention is that his campaign against this majority's control netted only 48 percent of the city's votes. The Democrats and the Human Rights Party, who together had implemented these programs, got 52 percent of the vote. However, because that majority was split between the two parties, neither ended up with more than Stephenson, and thus he won with a minority of the votes.

April 1, 1975. Despite Stephenson's son's attempts in his two years of office to drive certain people out of town, the Diag is filled with young people smoking marijuana. After his party repealed the $5 pot fine, city voters turned out at the polls and put it right back in. But every advance in the last two years has been hampered or destroyed by the Republican majority. Since taking office, Stephenson and fellow party members have:

*increased spending for city police until that amount is about a quarter of the total city budget,

*approved a campus area McDonalds and Burger King over the protests of area residents.

*used remaining Model Cities funds to finance a recreation building rather than continuing human services as residents of the area requested. *banned the popular Blues and Jazz Festival in 1974 , thus causing the promoters to be driven out of business and possibly forever ending another such festival.

*approved millions of dollars in the Capital Improvements Plan for such unpopular projects as more city golf courses, widening of State Street, building a downtown "bypass" a semi-highway through I residential neighborhood and an expanded city airport.

*stolen back funds allocated to build a People's Ballroom and Community Center.

With the campaign in full swing. Republicans are promising more of the same. "Financial responsibility" means more money to projects approved by Republicans and their banker. landlord and developer friends.

April 8, 1975. It's the day after Ann Arbor's annual city elections and the question is, who won?

The answer, of course, depends on whether people bothered going to the polls the day before. and made a real effort to alter the way the city is moving. This election is critical to Ann Arbor's ability to remain a viable place for alternative institutions and lifestyles to flourish. Under Republican rule, these are gradually being wiped out through harassment and lack of financial assistance.

However, under a Council controlled by Democrats and HRP, such alternatives will not only be allowed to flourish, but may even do so with city help.

Nothing about this election is certain. The fate of the mayoral elections, the ballot proposals, and the various ward races are all up in the air. Apathy has surrounded the campaign, and if it continues right through election day, we may wake up to find the conservatives dominated the polls and thus, two more years of Stephenson.

It can be prevented if people like those who read the SUN get out and vote. Each additional ballot increases the chance for a positive future.

On the following pages, we have a full report on the election, including the three ballot proposals and the candidates, as well as the SUN endorsements. Look these over carefully.and then go,to the polls and make your choice. Your vote is needed, and it's your future at stake. The April 7 election is critical to Ann Arbor's ability to remain a viable place for alternative institutions and lifestyles to flourish. Under Republican rule, their growth is being stunted.