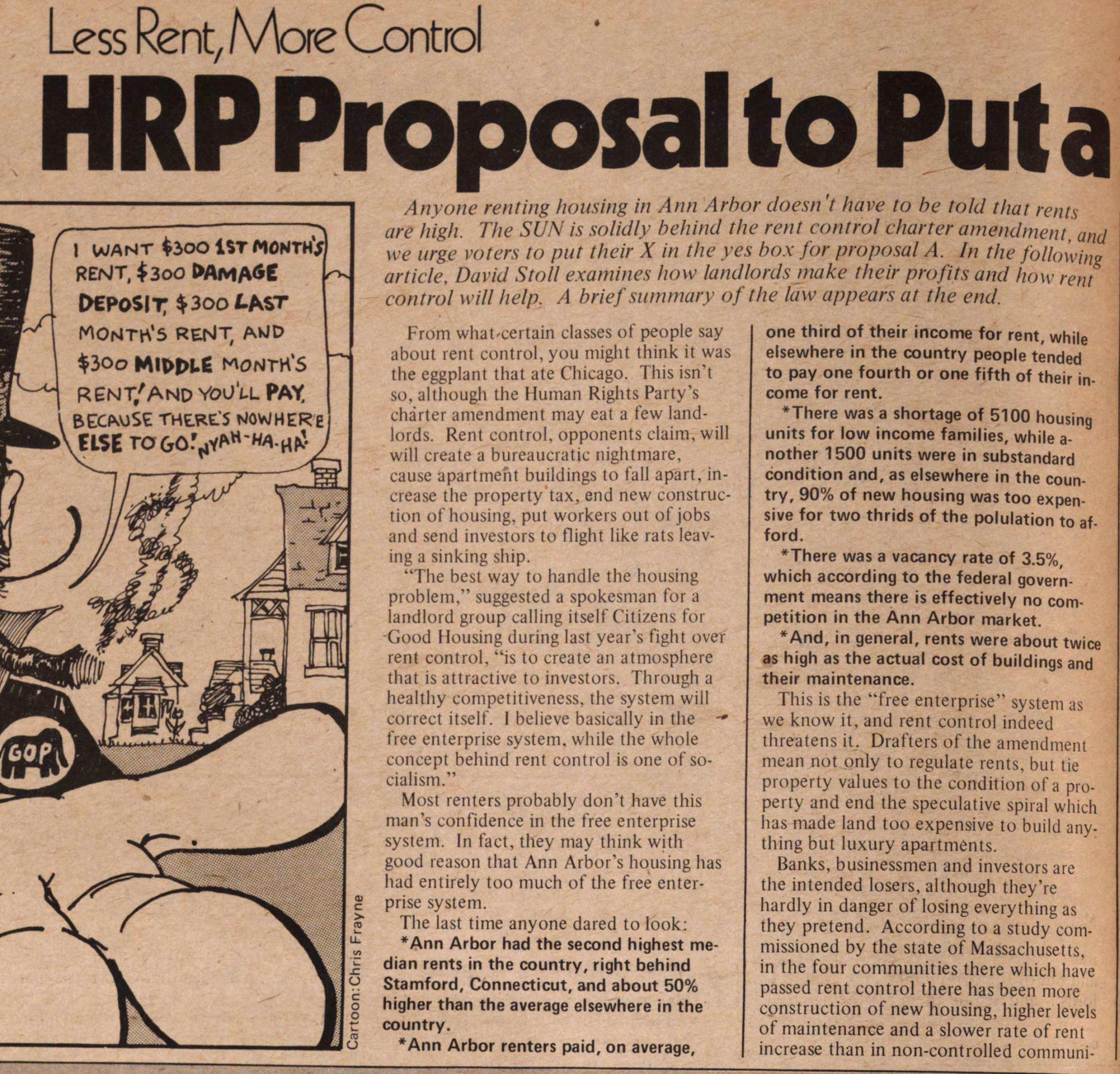 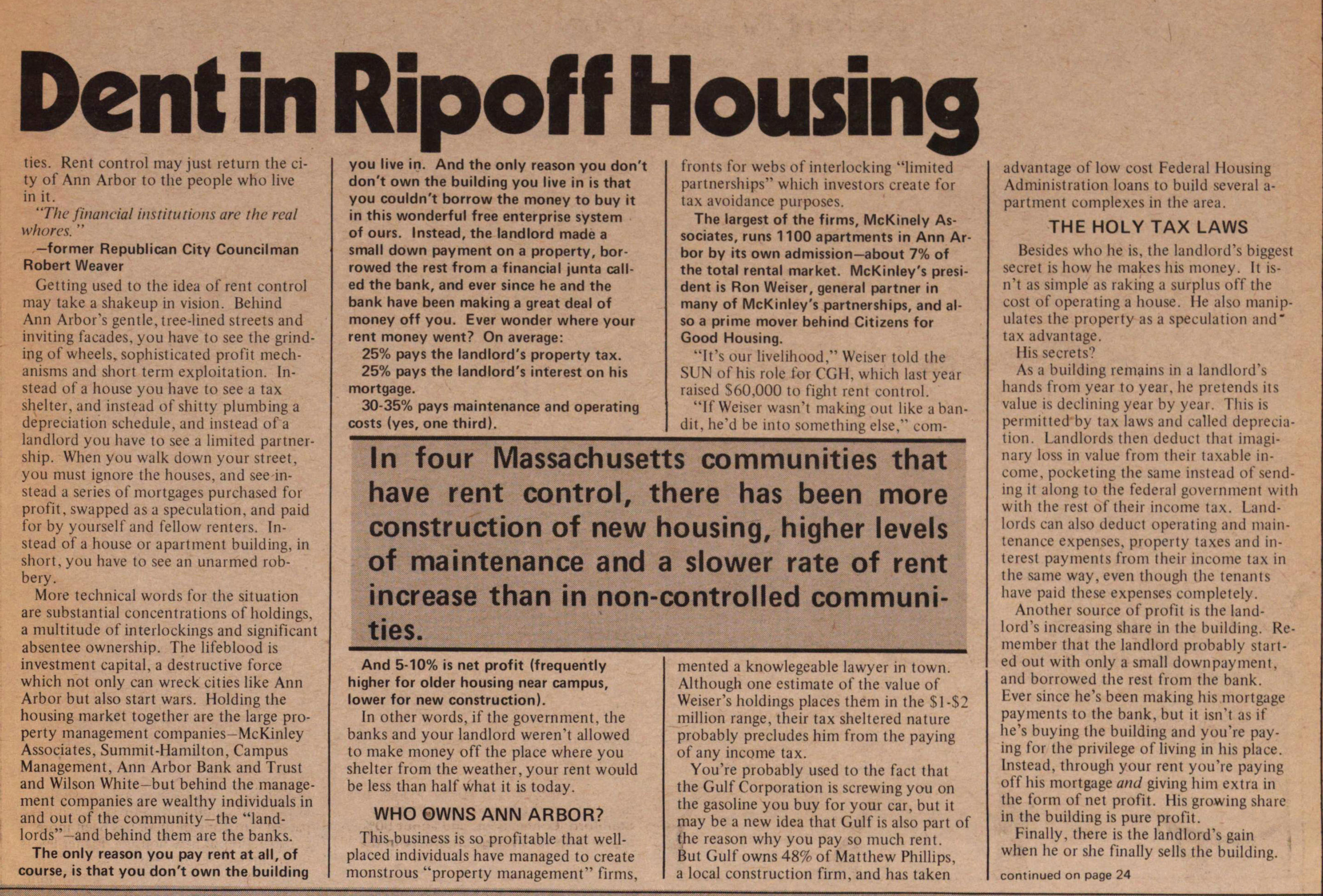 HRP Proposal to Put a Dent in Ripoff Housing

Anyone renting housing in Ann Arbor doesn't  have to be told that rents are high. The SUN is solidly behind the rent control charter amendment, and we urge voters to put their X in the yes box for proposal A. In the following article, David Stoll examines how landlords make their profits and how rent control will help. A brief summary of the Iaw appears at the end.

From what-certain classes of people say about rent control, you might think it was the eggplant that ate Chicago. This isn't so. although the Human Rights Party's charter amendment may eat a few landlords. Rent control, opponents claim, will will create a bureaucratic nightmare, cause apartment buildings to fall apart, increase the property tax, end new construction of housing, put workers out of jobs and send investors to flight like rats Ieaving a sinking ship.

"The best way to handle the housing problem," suggested a spokesman for a landlord group calling itself Citizens for Good Housing during last year's fight over rent control, "is to create an atmosphere that is attractive to investors. Through a healthy competitiveness, the system will correct itself. I believe basically in the free enterprise system. while the whole concept behind rent control is one of socialism."

The last time anyone dared to look:

*Ann Arbor had the second highest median rents in the country, right behind Stamford, Connecticut, and about 50% higher than the average elsewhere in the country.

*Ann Arbor renters paid, on average. one third of their income for rent, while elsewhere in the country people tended to pay one fourth or one fifth of their income for rent. *There was a shortage of 5100 housing units for low income families, while another 1500 units were in substandard condition and, as elsewhere in the country, 90% of new housing was too expensive for two thirds of the population to afford.

*There was a vacancy rate of 3.5%, which according to the federal government means there is effectively no competition in the Ann Arbor market.

*And, in general, rents were about twice as high as the actual cost of buildings and their maintenance.

This is the "free enterprise" system as we know it, and rent control indeed threatens it. Drafters of the amendment mean not only to regulate rents, but tie property values to the condition of a property and end the speculative spiral which has made land too expensive to build anything but luxury apartments.

Banks, businessmen and investors are the intended losers, although they're hardly in danger of losing everything as they pretend. According to a study commissioned by the state of Massachusetts, in the four communities there which have passed rent control there has been more construction of new housing, higher levels of maintenance and a slower rate of rent increase than in non-controlled ties. Rent control may just return the city of Ann Arbor to the people who live in it.

"The financial institutions are the real whores. "

More technical words for the situation are substantial concentrations of holdings, a multitude of interlockings and significant absentee ownership. The lifeblood is investment capital, a destructive force which not only can wreck cities like Ann Arbor but also start wars. Holding the housing market together are the large property management companies-McKinley Associates, Summit-Hamilton, Campus Management, Ann Arbor Bank and Trust and Wilson White-but behind the management companies are wealthy individuals in and out of the community- the "landlords"-and behind them are the banks.

The only reason you pay rent at all, of course, is that you don't own the building you live in. And the only reason you don't don't own the building you live in is that you couldn't borrow the money to buy it in this wonderful free enterprise system of ours. Instead, the landlord made a small down payment on a property, borrowed the rest from a financial junta called the bank, and ever since he and the bank have been making a great deal of money off you. Ever wonder where your rent money went? On average: 25% pays the landlord's property tax. 25% pays the landlord's interest on his mortgage. 30-35% pays maintenance and operating costs (yes, one third). And 5-10% is net profit (frequently higher for older housing near campus, lower for new construction).

In other words, if the government, the banks and your landlord weren't allowed to make money off the place where you shelter from the weather, your rent would be less than half what it is today.

This business is so profitable that well placed individuals have managed to create monstrous "property management" firms fronts for webs of interlocking "limited partnerships" which investors create for tax avoidance purposes.

The largest of the firms, McKinely Associates, runs 1100 apartments in Ann Arbor by its own admission- about 7% of the total rental market. McKinley's president is Ron Weiser, general partner in many of McKinley's partnerships, and also a prime mover behind Citizens for Good Housing.

"It's our livelihood," Weiser told the SUN of his role for CGH, which last year raised $60,000 to fight rent control.

"If Weiser wasn't making out like a bandit, he'd be into something else," commented a knowlegeable lawyer in town. Although one estimate of the value of Weiser's holdings places them in the $1-$2 million range, their tax sheltered nature probably precludes him from the paying of any income tax.

You're probably used to the fact that the Gulf Corporation is screwing you on the gasoline you buy for your car, but it may be a new idea that Gulf is also part of the reason why you pay so much rent. But Gulf owns 48% of Matthew Phillips, a local construction firm, and has taken advantage of low cost Federal Housing Administration loans to build several apartment complexes in the area.

Besides who he is the landlord's biggest secret is how he makes his money. It isn't as simple as raking a surplus off the cost of operating a house. He also manipulates the property as a speculation and tax advantage.

As a building remains in a landlord's hands from year to year. he pretends its value is declining year by year. This is permitted by tax laws and called depreciation. Landlords then deduct that imaginary loss in value from their taxable income, pocketing the same instead of sending it along to the federal government with with the rest of their income tax. Landlords can also deduct operating and maintenance expenses, property taxes and interest payments from their income tax in the same way, even though the tenants have paid these expenses completely.

Another source of profit is the landlord's increasing share in the building. Remember that the landlord probably started out with only a small down payment and borrowed the rest from the bank. Ever since he's been making his mortgage payments to the bank, but it isn't as if he's buying the building and you're paying for the privilege of living in his place. Instead, through your rent you're paying off his mortgage and giving him extra in the form of net profit. His growing share in the building is pure profit.

Finally, there is the landlord's gain when he or she finally sells the building.

In four Massachusetts communities that have rent control, there has been more construction of new housing, higher levels of maintenance and a slower rate of rent increase than in non-controlled communities.