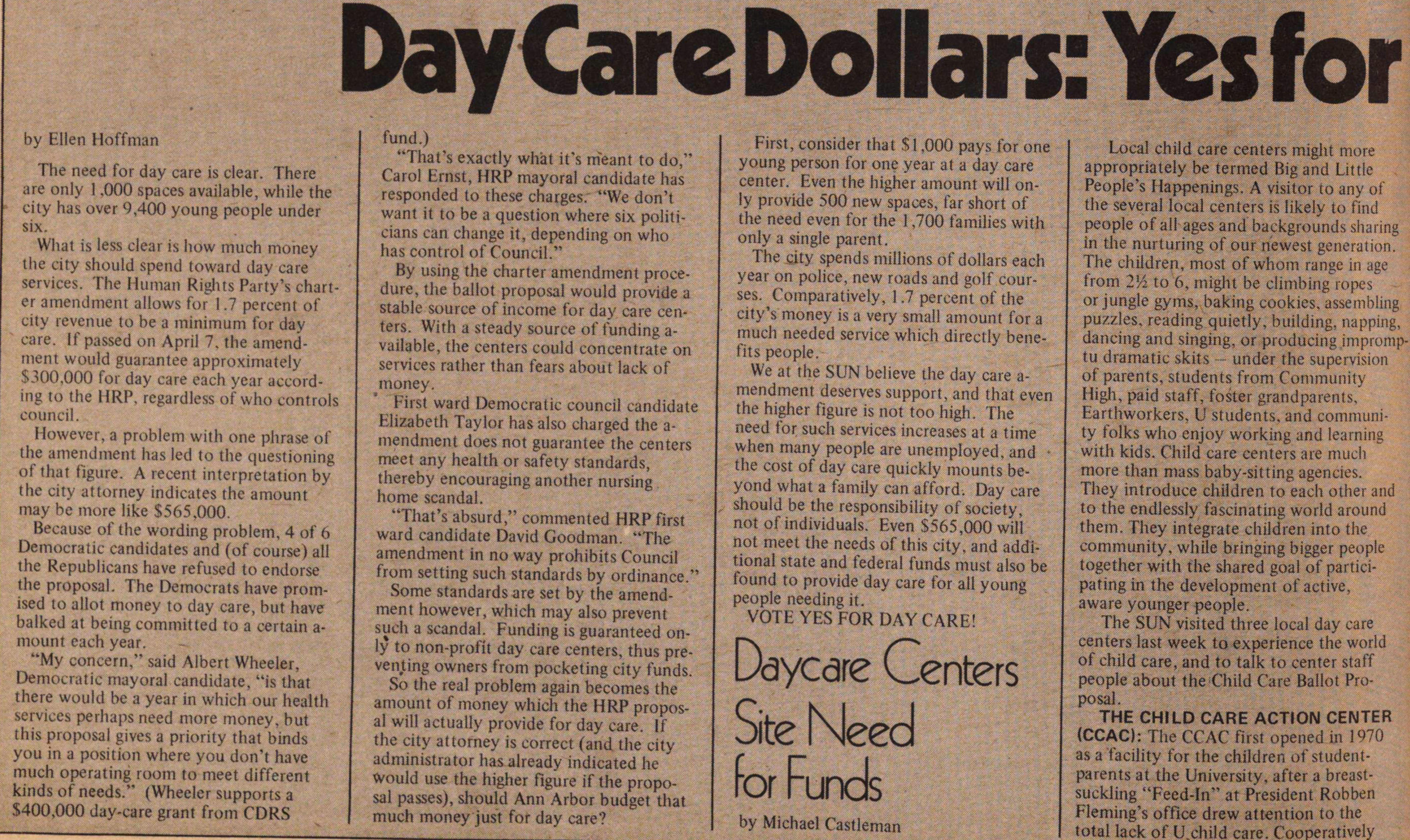 The need for day care is clear. There are only 1,000 spaces available, while the city has over 9,400 young people under six.           What is less clear is how much money the city should spend toward day care services. The Human Right Party's charter amendment allows for 1.7 percent of city revenue to be a minimum for day care.

If passed on April 7 the amendment would guarantee approximately 10,000 for day care each year according to the HRP regardless of who Controls council.

However, a problem with one phrase of the amendment has led to the questioning of that figure. A recent interpretation by the city attorney indicates the amount may be more like $565,000.

Because of the wording problem, 4 of 6 Democratic candidates and (of course) all the Republicans have refused to endorse the proposal. The Democrats have promised to allot money to day care, but have balked at being committed to a certain amount each year.

"My concern." said Albert Wheeler, Democratic mayoral candidate, "is that there would be a year in which our health services perhaps need more money, but this proposal gives a priority that binds you in a position where you don't have much operating room to meet different kinds of needs." (Wheeler supports a $400,000 day-care grant from CDRS fund.)

"That's exactly what it's meant to do,"  Carol Ernst, HRP mayoral candidate has responded to these charges. "We don't want it to be a question where six politicians can change it, depending on who has control of Council."

By using the charter amendment procedure, the ballot proposal would provide a stable source of income for day care centers. With a steady source of funding available, the centers could concentrate on services rather than fears about lack of money.

Some standards are set by the amendment however, which may also prevent such a scandal. Funding is guaranteed only to non-profit day care centers, thus preventing owners from pocketing city funds.      So the real problem again becomes the amount of money which the HRP proposal will actually provide for day care. lf the city attorney is correct (and the city administrator has already indicated he would use the higher figure if the proposal passes), should Ann Arbor budget that much money just for day care?

First, consider that $1,000 pays for one young person for one year at a day care center. Even the higher amount will only provide 500 new spaces, far short of the need even for the 1 ,700 families with only a single parent . The city spends millions of dollars each year on police, new roads and golf courses. Comparatively, 1.7 percent of the city's money is a very small amount for a much needed service which directly benefits people.

We at the SUN believe the day care amendment deserves support, and that even the higher figure is not too high. The need for such services increases at a time when many people are unemployed, and the cost of day care quickly mounts beyond what a family can afford. Day care should be the responsibility of society, not of individuals. Even $565,000 will not meet the needs of this city, and additional state and federal funds must also be found to provide day care for all young people needing it. VOTE YES FOR DAY CARE!