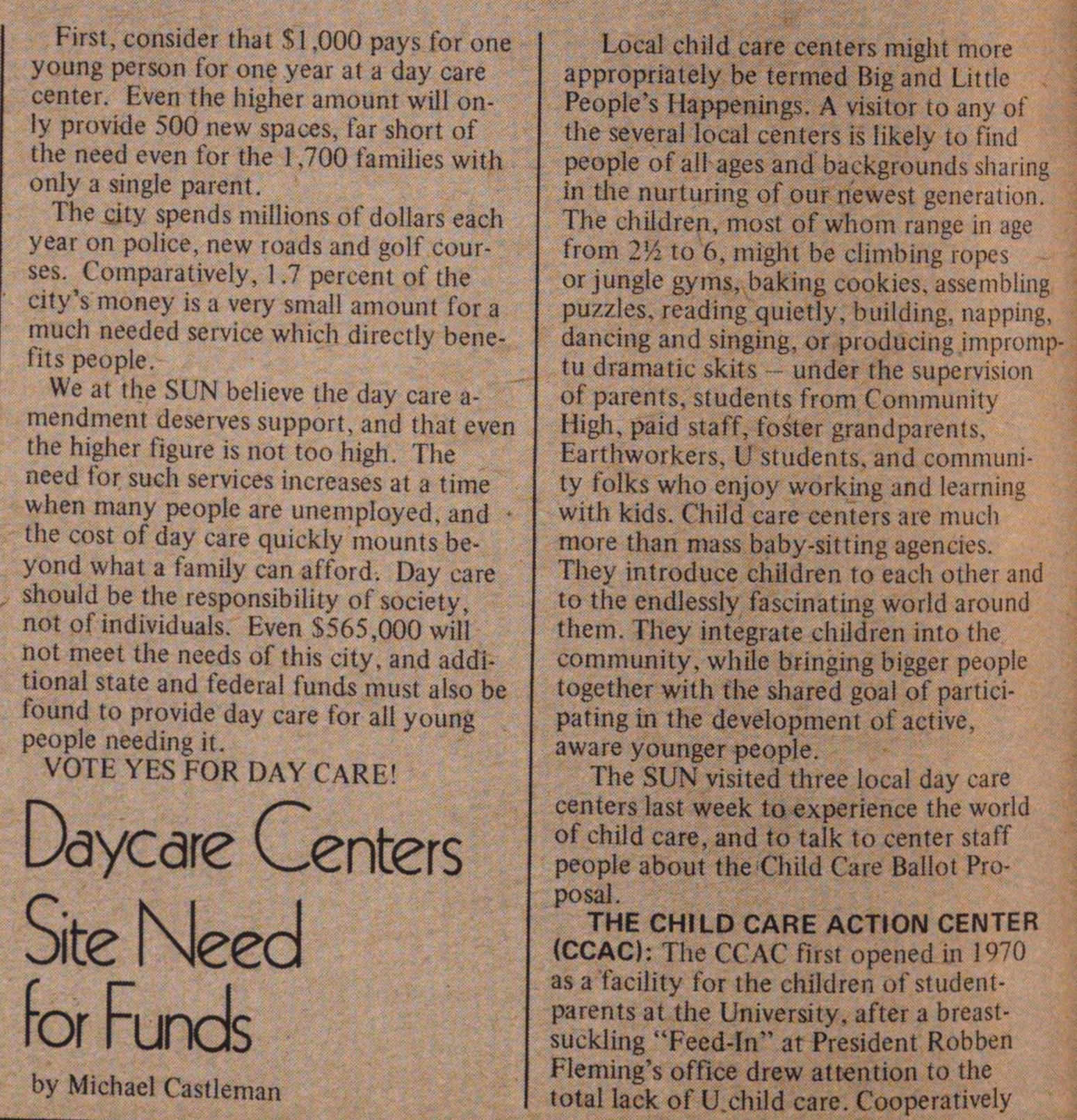 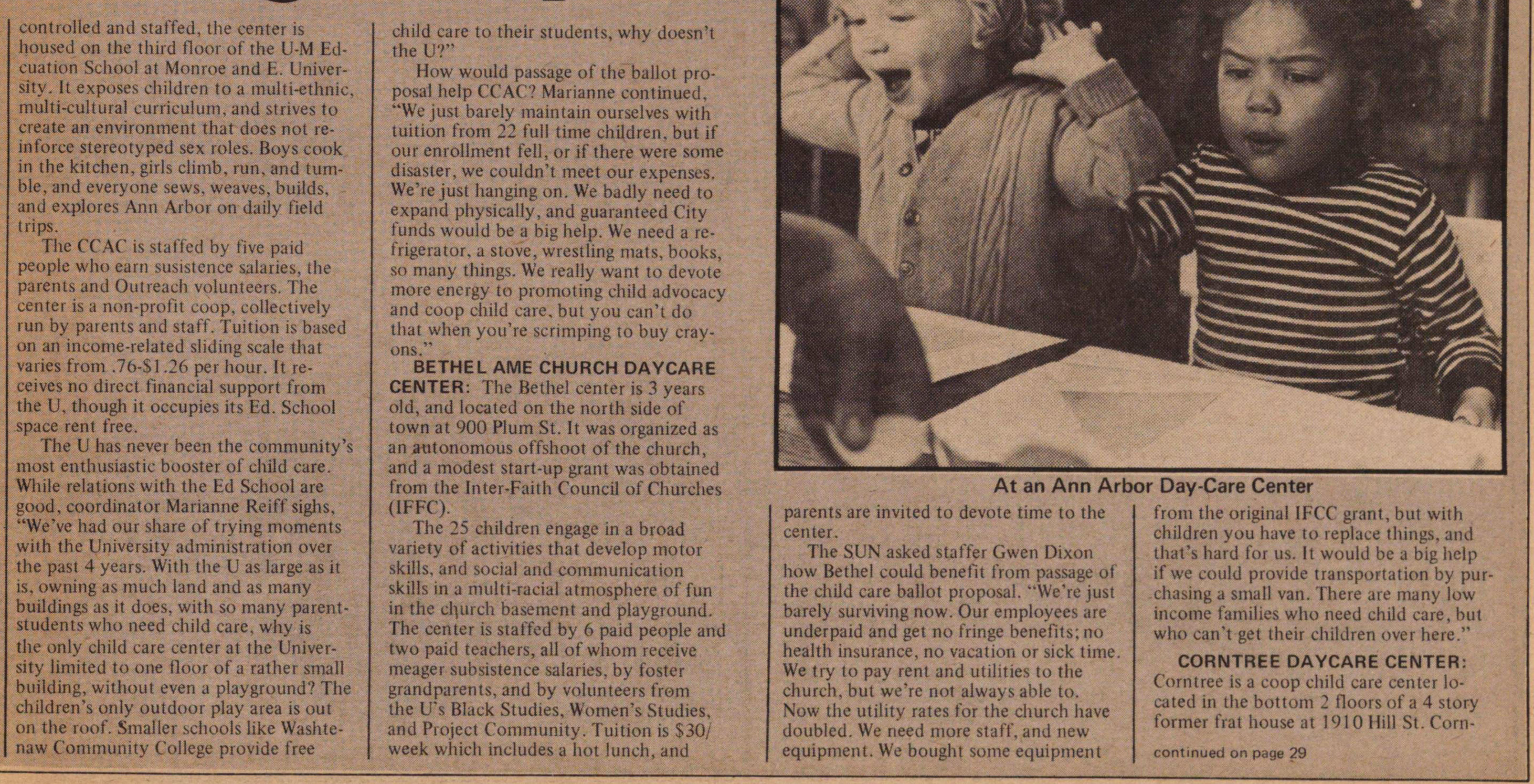 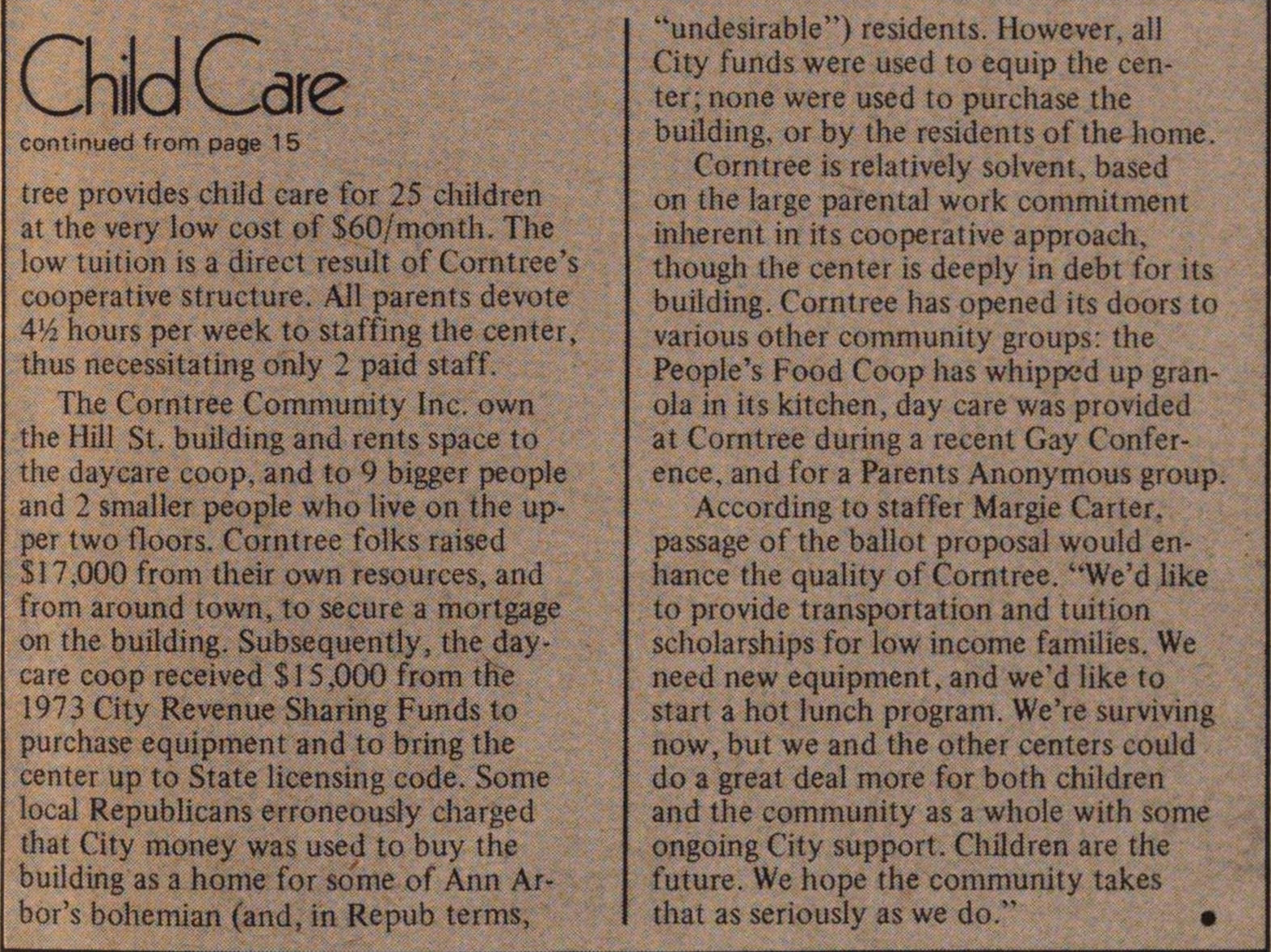 Local child care centers might more appropriately be termed Big and Little People's Happenings. A visitor to any of the several local centers is likely to find people of ages and backgrounds sharing in the nurturing of our newest generation. The children, most of whom range in age from 2 1/2 to 6, might be climbing ropes or jungle gyms, baking cookies, assembling puzzles, reading quietly, building, napping, dancing and singing, or producing impromptu dramatic skits under the supervision of parents, students from Community High, paid staff, foster grandparents. Earthworkers, U students, and community folks who enjoy working and learning with kids. Child care centers are much more than mass baby-sitting agencies. They introduce children to each other and to the endlessly fascinating world around them. They integrate children into the community, while bringing bigger people together with the shared goal of participating in the development of active, aware younger people.

The SUN visited three local day care centers last week to experience the world of child care, and to talk to center staff people about the Child Care Ballot Proposal.

THE CHILD CARE ACTION CENTER (CCAC):  The CCAC first opened in 1970 as a facility for the children of student parents at the University, after a breast-suckling "Feed-In" at President Robben Fleming's office drew attention to the total lack of U child care. Cooperatively controlled and staffed, the center is housed on the third floor of the U-M Education School at Monroe and E. University. It exposes children to a multi-ethnic. multi-cultural curriculum, and strives to create an environment that does not reinforce stereotyped sex roles. Boys cook in the kitchen, girls climb, run, and tumble, and everyone sews, weaves, builds. and explores Ann Arbor on daily field trips. The CCAC is staffed by five paid people who earn susistence salaries, the parents and Outreach volunteers. The center is a non-profit coop, collectively run by patents and staff. Tuition is based on an income-related sliding scale that varies from, .76-$1.26 per hour. lt receives no direct financial support from the U. though it occupies its Ed. School space rent tree.

The U has never been the community's most enthusiastic booster of child care. While relations with the Ed School are good, coordinator Marianne Reiff sighs, "We've had our share of trying moments with the University administration over the past 4 years. With the U as large as it is owning as much land and as many buildings as it does with so many parent students who need child care, why is the only child care center at the University limited to one floor of a rather small building, without even a playground? The children's only outdoor play area is out on the roof. Smaller schools like Washtenaw Community College provide free child care to their students, why doesn't the U?"

How would passage of the ballot proposal help CCAC? Marianne continued, "We just barely maintain ourselves with tuition from 22 full time children, but it's our enrollment fell, or if there were some disaster, we couldn't meet our expenses. We're just hanging on. We badly need to expand physically, and guaranteed City funds would be a big help. We need a refrigerator, a stove, wrestling mats, books, so many things. We really want to devote more energy to promoting child advocacy and coop child care, but you can't do that when you're scrimping to buy crayons."

The Bethel center is 3 years old, and located on the north side of town at 900 Plum St. It was organized as an autonomous offshoot of the church, and a modest start-up grant was obtained from the Inter-Faith Council of Churches (IFFC).

The 25 children engage in a broad variety of activities that develop motor skills, and social and communication skills in a multi-racial atmosphere of fun n the church basement and playground. The center is staffed by 6 paid people and two paid teachers, all of whom receive meager subsistence salaries, by foster grandparents, and by volunteers from the U's Black Studies, Women's Studies, and Project Community. Tuition is $30/ week which includes a hot lunch, and parents are invited to devote time to the center.

The SUN asked staffer Gwen Dixon how Bethel could benefit from passage of the child care ballot proposal. "We're just barely surviving now. Our employees are underpaid and get no fringe benefits; no health insurance, no vacation or sick time. We try to pay rent and utilities to the church, but we're not always able to. Now the utility rates for the church have doubled. We need more staff", and new equipment. We bought some equipment from the original IFCC grant, but with children you have to replace things, and that's hard for us. It would be a big help if we could provide transportation by purchasing a small van. There are many low income families who need child care, but who can't get their children over here."

Corntree is a coop child care center located in the bottom 2 floors of a 4 story farmer frat house at 1910 Hill St. Corn-

tree provides child care for 25 children at the very low cost of $60.00/month. The low tuition is a direct result of Corntree's cooperative structure. All parents devote 4 1/2 hours per week to staffing the center, thus necessitating only 2 paid staff.

The Corntree Community Inc. own the HilI St. building and rents space to the daycare coop, and to 9 bigger people and 2 smaller people who live on the upper two floors. Corntree folks raised $17,000 from their own resources, and from around town, to secure a mortgage on the building. Subsequently, the daycare coop received $15,000 from the 1973 City Revenue Sharing Funds to purchase equipment and to bring the center up to State licensing code. Some local Republicans erroneously charged that City money was used to buy the building as a home for some of Ann Arbor's bohemian (and, in Repub terms, "undesirable") residents. However, all City funds were used to equip the center; none were used to purchase the building, or by the residents of the home.

Corntree is relatively solvent, based on the large parental work commitment inherent in its cooperative approach, though the center is deeply in debt for its building. Corntree has opened its doors to various other community groups: the People's Food Coop has whipped up granola in its kitchen, day care was provided at Corntree during a recent Gay Conference, and for a Parents Anonymous group.

According to staffer Margie Carter, passage of the ballot proposal would enhance the quality of Corntree. "We'd like to provide transportation and tuition scholarships for low income families. We need new equipment, and we'd like to start a hot lunch program. We're surviving now, but we and the other centers could do a great deal more for both children and the community as a whole with some ongoing City support. Children are the future. We hope the community takes that as seriously as we do."