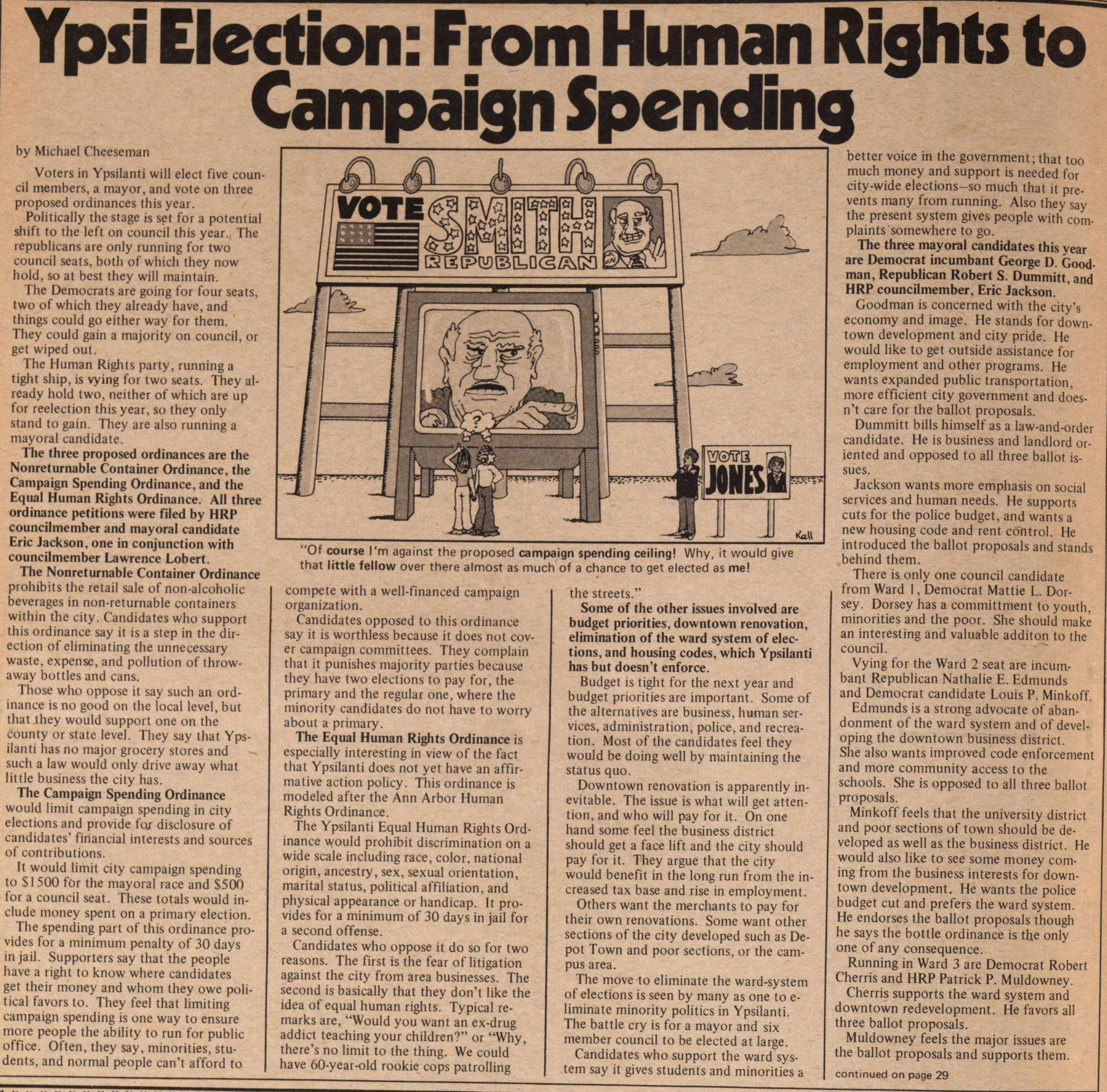 Voters in Ypsilanti will elect five council members, a mayor, and vote on three proposed ordinances this year.

Politically the stage is set for a potential shift to the left on council this year. The republicans are only running for two council seats, both of which they now hold, so at best they will maintain. The Democrats are going for four seats, two of which they already have, and things could go either way for them. They could gain a majority on council, or get wiped out.

The Human Rights party, running a tight ship, is vying for two seats. They already hold two, neither of which are up for reelection this year, so they only stand to gain. They are also running a mayoral candidate.    The three proposed ordinances are the Nonreturnable Container Ordinance, the Campaign Spending Ordinance, and the Equal Human Rights Ordinance. All three ordinance petitions were filed by HRP council member and mayoral candidate Eric Jackson, one in conjunction with council member Lawrence Lobert.

The Nonreturnable Container Ordinance prohibits the retail sale of non-alcoholic beverages in non-returnable containers within the city. Candidates who support this ordinance say it is a step in the direction of eliminating the unnecessary waste, expense, and pollution of throw-away bottles and cans.

Those who oppose it say such an ordinance is no good on the local level, but that they would support one on the County or state level. They say that Ypsilanti has no major grocery stores and such a law would only drive away what littIe business the city has.

The Campaign Spending Ordinance would limit campaign spending in city elections and provide for disclosure of candidates' financial interests and sources of contributions. It would limit city campaign spending to $1500 for the mayoral race and $500 for a council seat. These totals would include money spent on a primary election.

The spending part of this ordinance provides for a minimum penalty of 30 days in jail. Supporters say that the people have a right to know where candidates get their money and whom they owe political favors to. They feel that limiting campaign spending is one way to ensure more people the ability to run for public office. Often, they say, minorities, students, and normal people can't afford to compete with a well-financed campaign organization.

Candidates opposed to this ordinance say it is worthless because it does not cover campaign committees. They complain that it punishes majority parties because they have two elections to pay for, the primary and the regular one, where the minority candidates do not have to worry about a primary.

The Ypsilanti Equal Human Rights Ordinance would prohibit discrimination on a wide scale including race, color, national origin, ancestry, sex, sexual orientation, marital status, political affiliation. and physical appearance or handicap. It provides for a minimum of 30 days in jail for a second offense.

Candidates who oppose it do so for two reasons. The first is the fear of litigation against the city from area businesses. The second is basically that they don't like the idea of equal human rights. Typical remarks are, "Would you want an ex-drug addict teaching your children?" or "Why, there's no limit to the thing. We could have 60-year-old rookie cops patrolling the streets."

Some of the other issues involved are budget priorities, downtown renovation, elimination of the ward system of elections, and housing codes, which Ypsilanti has but doesn't enforce.

Budget is tight for the next year and budget priorities are important. Some of the alternatives are business, human services, administration, police, and recreation. Most of the candidates feel they would be doing well by maintaining the status quo.

Downtown renovation is apparently inevitable. The issue is what will get attention, and who will pay for it. On one hand some feel the business district should get a face lift and the city should pay for it. They argue that the city would benefit in the long run from the increased tax base and rise in employment.

Others want the merchants to pay for their own renovations. Some want other sections of the city developed such as Depot Town and poor sections, or the campus area.

The move to eliminate the ward-system of elections is seen by many as one to eliminate minority politics in Ypsilanti. The battle cry is for a mayor and six member council to be elected at large.

Candidates who support the ward system say it gives students and minorities a better voice in the government; that too much money and support is needed for city-wide elections-so much that it prevents many from running. Also they say the present system gives people with complaints somewhere to go.        The three mayoral candidates this year are Democrat incumbant George D. Goodman, Republican Robert S. Dummitt, and HRP council member, Eric Jackson.

Goodman is concerned with the city's economy and image. He stands for downtown development and city pride. He would like to get outside assistance for employment and other programs. He wants expanded public transportation, more efficient city government and doesn't care for the ballot proposals.

Dummitt bills himself as a law-and-order candidate. He is business and landlord oriented and opposed to all three ballot issues.

Jackson wants more emphasis on social services and human needs. He supports cuts for the police budget, and wants a new housing code and rent control. He introduced the ballot proposals and stands behind them.

There is only one council candidate from Ward 1, Democrat Mattie L. Dorsey. Dorsey has a committment to youth, minorities and the poor. She should make an interesting and valuable addition to the council.

Vying for the Ward 2 seat are incumbant Republican Nathalie E. Edmunds and Democrat candidate Louis P. Minkoff. Edmunds is a strong advocate of abandonment of the ward system and of developing the downtown business district. She also wants improved code enforcement and more community access to the schools. She is opposed to all three ballot proposals.

Minkoff feels that the university district and poor sections of town should be developed as well as the business district. He would also like to see some money coming from the business interests for downtown development. He wants the police budget cut and prefers the ward system. He endorses the ballot proposals though he says the bottle ordinance is the only one of any consequence.

Muldowney feels the major issues are the ballot proposals and supports them.

He wants the poor sections of town developed and feels business monies should pay for downtown development through assessment.

Lindsay wants improved housing code enforcement and city development which she would couple with human resource development- parking structures with daycare centers on top. She favors the ward system and all three ballot proposals.

Krehbiel wants improved housing code enforcement, better transportation including bike paths, and an all-woman rape investigating team including medical, psychiatry, and abortion counselling services. She would cut the police budget and prefers the ward system. She would like to see free medical clinics, free child care, and free legal aid. She said the one necessity in Ypsilanti is for a radical feminist on council.