The Silver Soul Of Labelle, "The All Girl Band" 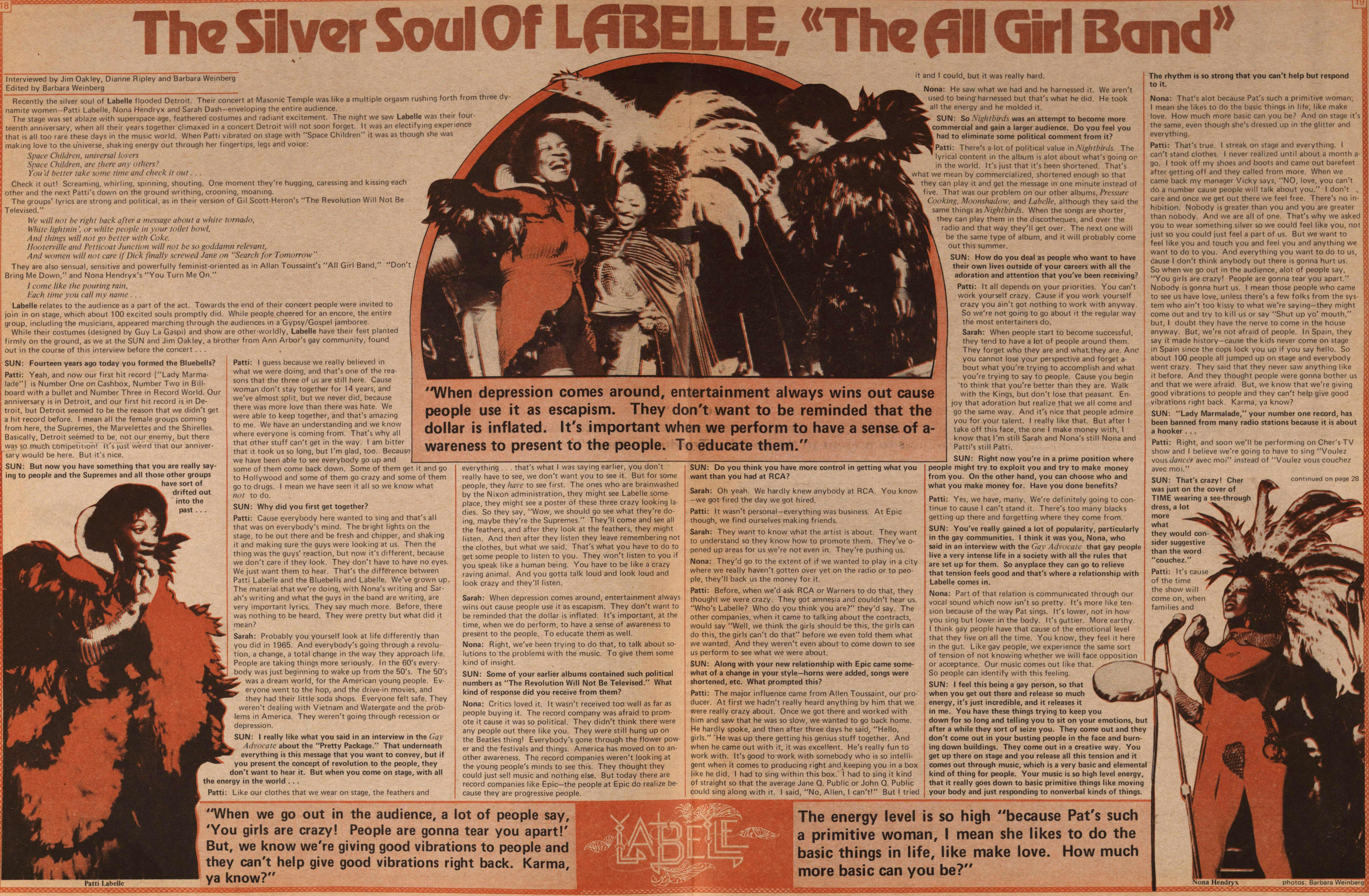 The Silver Soul of LABELLE, "The All Girl Band"

Recently the silver soul of Labelle flooded Detroit. Their concert at Masonic Temple was like a multiple orgasm rushing forth from three dynamite women-Patti Labelle, Nona Hendryx and Sarah Dash-enveloping the entire audience.

The stage was set ablaze with superspace-age, feathered costumes and radiant excitement. The night we saw Labelle was their fourteenth anniversary, when all their years together climaxed in a concert Detroit will not soon forget. It was an electrifying experience that is all too rare these days in the music world. When Patti vibrated on stage with "Space Children" it was as though she was making love to the universe, shaking energy out through her fingertips, legs and voice:

Space Children, are there any other?

You' d better take some time and check it out ...

Check it out! Screaming, whirling, spinning, shouting. One moment they're hugging, caressing and kissing each other and the next Patti's down on the ground writhing, crooning, moaning.

The groups' lyrics are strong and political, as in their version of Gil Scott-Heron's "The Revolution Will Not Be Televised."

We will not be right back after a massage about a white tornado. White lightnin ', or white people in your toilet bowl. And things will not go better with Coke.  Hooterville and Petticoat Junction will not be relevant, And women will not care if Dick finally screwed Jane on "Search for Tomorrow"

They are also sensual, sensitive and powerfully feminist-oriented as in Allan Toussaint's "All GirI Band," "Don't Bring Me Down," and Nona Hendryx's "You Turn Me On.

Labelle relates to the audience as a part of the act. Towards the end of their concert people were invited to join in on stage, which about 100 excited souls promptly did. While people cheered for an encore, the entire group, including the musicians, appeared marching through the audiences in a Gypsy/Gospel jamboree.

While their costumes (designed by Guy La Gaspi) and show are otherworldly, Labelle have their feet planted firmly on the ground, as we at the SUN and Jim Oakley, a brother from Ann Arbor's gay community, found out in the course of this interview before the concert ...

SUN: Fourteen years ago today you formed the Bluebells?

Patti: Yeah, and now our first hit record ["Lady Marmalade") is Number One on Cashbox, Number Two in Billboard with a bullet and Number Three in Record World. Our anniversary is in Detroit, and our first hit record is in Detroit, but Detroit seemed to be the reason that we didn't get a hit record before. I mean all the female groups coming from here, the Supremes, the Marvelettes and the Shirelles. Basically, Detroit seemed to be, not our enemy, but there I was so much competition! It's just weird that our anniversary would be here. But it's nice.

SUN: But now you have something that you are really sayinq to people and the Supremes and all those other groups have sort of drifted out into the past . . .

Patti: I guess because we really believed in what we were doing, and that's one of the reasons that the three of us are still here. Cause woman don't stay together for 14 years, and we've almost split, but we never did, because there was more love than there was hate. We were able to keep together, and that's amazing to me. We have an understanding and we know where everyone is coming from. That's why all that other stuff can't get in the way. I am bitter that it took us so long, but l'm glad, too. Because we have been able to see everybody go up and some of them come back down. Some of them get it and go to Hollywood and some of them go crazy and some of them go to drugs. I mean we have seen it all so we know what not to do.

SUN: Why did you first get together?

Patti: Cause everybody here wanted to sing and that's all that was on everybody's mind. The bright lights on the stage, to be out there and be fresh and chipper, and snaking it and making sure the guys were looking at us. Then the thing was the guys' reaction, but now it's different, because we don't care if they look. They don't have to have no eyes. We just want them to hear. That's the difference between Patti Labelle and the Bluebells and Labelle. We've grown up.. The material that we're doing, with Nona's writing and Sarah's writing and what the guys in the band are writing, are very important lyrics. They say much more. Before, there was nothing to be heard. They were pretty but what did it mean?

Sarah: Probably you yourself look at life differently than you did in 1965. And everybody's going through a revolution, a change, a total change in the way they approach life. People are taking things more seriously. In the 60's everybody was just beginning to wake up from the 50's. The 50's . was a dream world, for the American young people. Everyone went to the hop, and the drive-in movies, and they had their little soda shops. Everyone felt safe. They weren't dealing with Vietnam and Watergate and the problems in America. They weren't going through recession or depression.

SUN: I really like what you said in an interview in the Gay Advocate about the "Pretty Package." That underneath everything is this message that you want to convey, but if you present the concept of revolution to the people, they don't want to hear it. But when you come on stage, with all the energy n the world . . .

Patti: Like our clothes that we wear on stage, the feathers and everything . . . that's what I was saying earlier, you don't really have to see, we don't want you to see it. But for some people, they have to see first. The ones who are brainwashed by the Nixon administration, they might see Labelle someplace, they might see a poster of these three crazy looking ladies. So they say, "Wow, we should go see what they're doing, maybe they're the Supremes." They'll come and see all the feathers, and after they look at the feathers, they might listen. And then after they listen they leave remembering not the clothes, but what we said. That's what you have to do to get some people to listen to you. They won't listen to you if you speak like a human being. You have to be like a crazy raving animal. And you gotta talk loud and look loud and look crazy and they'll listen.

Sarah: When depression comes around, entertainment always wins out cause people use it as escapism. They don't want to be reminded that the dollar is inflated. It's important, at the time, when we do perform, to have a sense of awareness to present to the people. To educate them as well.

Nona: Right, we've been trying to do that, to talk about solutions to the problems with the music. To give them some kind of insight.

SUN: Some of your earlier albums contained such political numbers as "The Revolution Will Not Be Televised." What kind of response did you receive from them?

Nona: Critics loved it. It wasn't received too well as far as people buying it. The record company was afraid to promote it cause it was so political. They didn't think there were any people out there like you. They were still I hung up on the Beatles thing! Everybody's gone through the flower power and the festivals and things. America has moved on to another awareness. The record companies weren't looking at the young people's minds to see this. They thought they could just sell music and nothing else. But today there are record companies like Epic- the people at Epic do realize because they are progressive people.

SUN: Do you think you have more control in getting what you want than you had at RCA?

Sarah: Oh yeah. We hardly knew anybody at RCA. You know-we got fired the day we got hired.

Patti: It wasn't personal- everything was business. At Epic though, we find ourselves making friends.