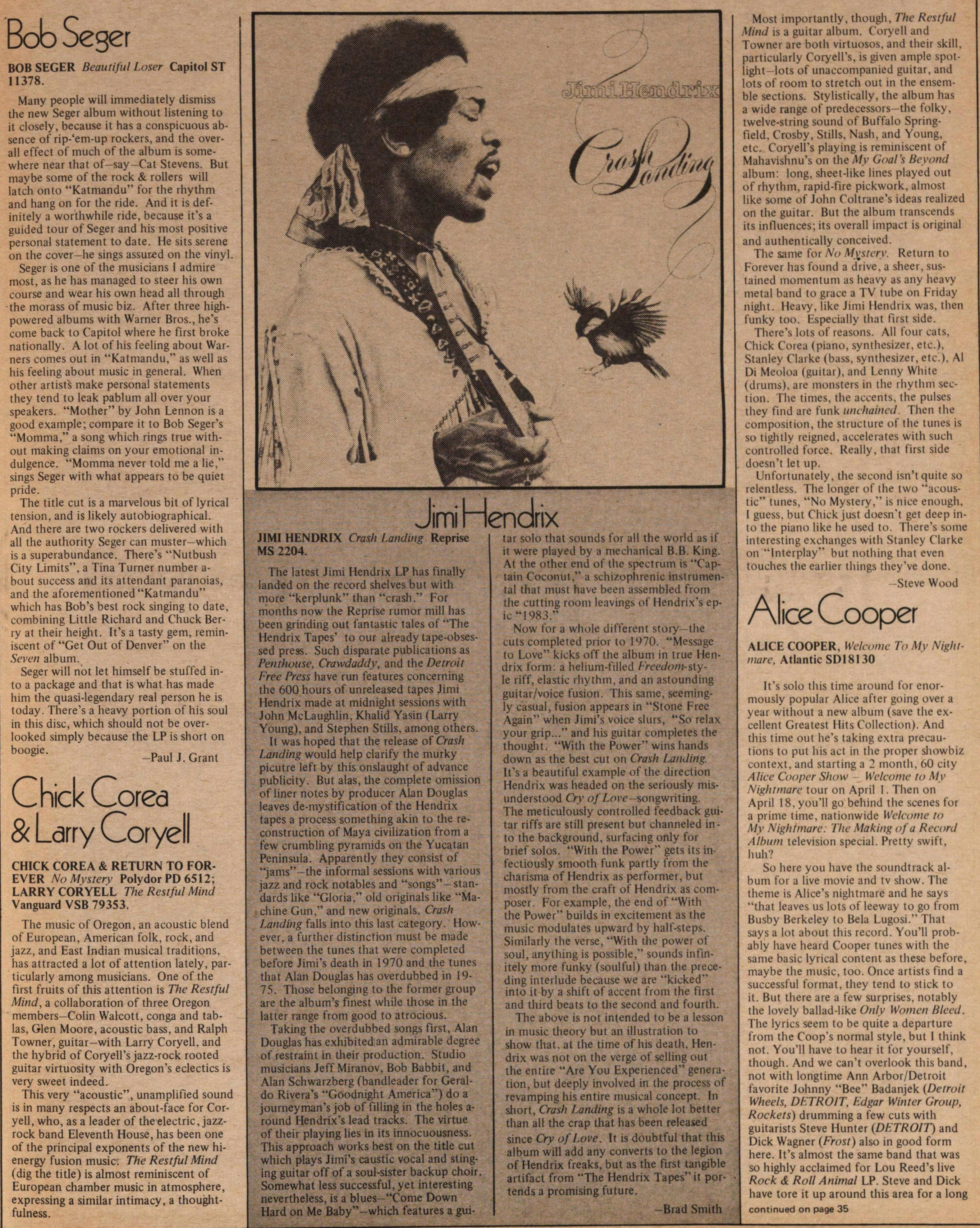 CHICK COREA & LARRY CORYELL RETURN TO FOREVER No Mystery Polydor PD 6512;  LARRY CORYELL The Restful Mind Vanguard VSB 79353. The music of Oregon, an acoustic blend of European, American folk, rock, and jazz, and East Indian musical traditions has attracted a lot of attention lately, particularly among musicians. One of the first fruits of this attention is The Restful Mind, a collaboration of three Oregon members-Colin Walcott, conga and tablas, Glen Moore, acoustic bass, and Ralph Towner, guitar- with Larry Coryell. and the hybrid of Coryell's jazz-rock rooted guitar virtuosity with Oregon's eclectics is very sweet indeed.

This very "acoustic", unamplified sound is in many respects an about-face for Coryell, who, as a leader of the electric, jazz-rock band Eleventh House, has been one of the principal exponents of the new hi-energy fusion music. The Restful Mind (dig the title) is almost reminiscent of European chamber music in atmosphere, expressing a similar intimacy, a thoughtfulness.

Most importantly, though, The Restful Mind is a guitar album. Coryell and Towner are both virtuosos and their skill, particularly Coryell's, is given ample spotlight-lots of unaccompanied guitar, and lots of room to stretch out in the ensemble sections. Stylistically, the album has a wide range of predecessors-the folky, twelve-string sound of Buffalo Springfield. Crosby, Stills, Nash, and Young, etc. Coryell's playing is reminiscent of Mahavishnu's on the My Goal's Beyond album: long. sheet-like lines played out of rhythm, rapid-fire pickwork, almost like some of John Coltrane's ideas realized on the guitar. But the album transcends its influences; its overall impact is original and authentically conceived.

The same for No Mystery. Return to Forever has found a drive, a sheer, sustained momentum as heavy as any heavy metal band to grace a TV tube on Friday night. Heavy, like Jimi Hendrix, was, then funky too. Especially that first side.

There's lots of reasons. All four cats, Chick Corea (piano, synthesizer, etc). Stanley Clarke (bass, synthesizer, etc'.), Al Di Meola (guitar), and Lenny White (drums), are monsters in the rhythm section. The times, the accents, the pulses they find are funk unchained, Then the composition, the structure of the tunes is so tightly reigned, accelerates with such controlled force. Really, that first side doesn't let tip.

Unfortunately, the second isn't quite so relentless. The longer of the two "acoustic" tunes, "No Mystery," is nice enough, I guess. but Chick just doesn't get deep ínto the piano like he used to. There's some interesting exchanges with Stanley Clarke on "interplay" but nothing that even touches the earlier things they've done.