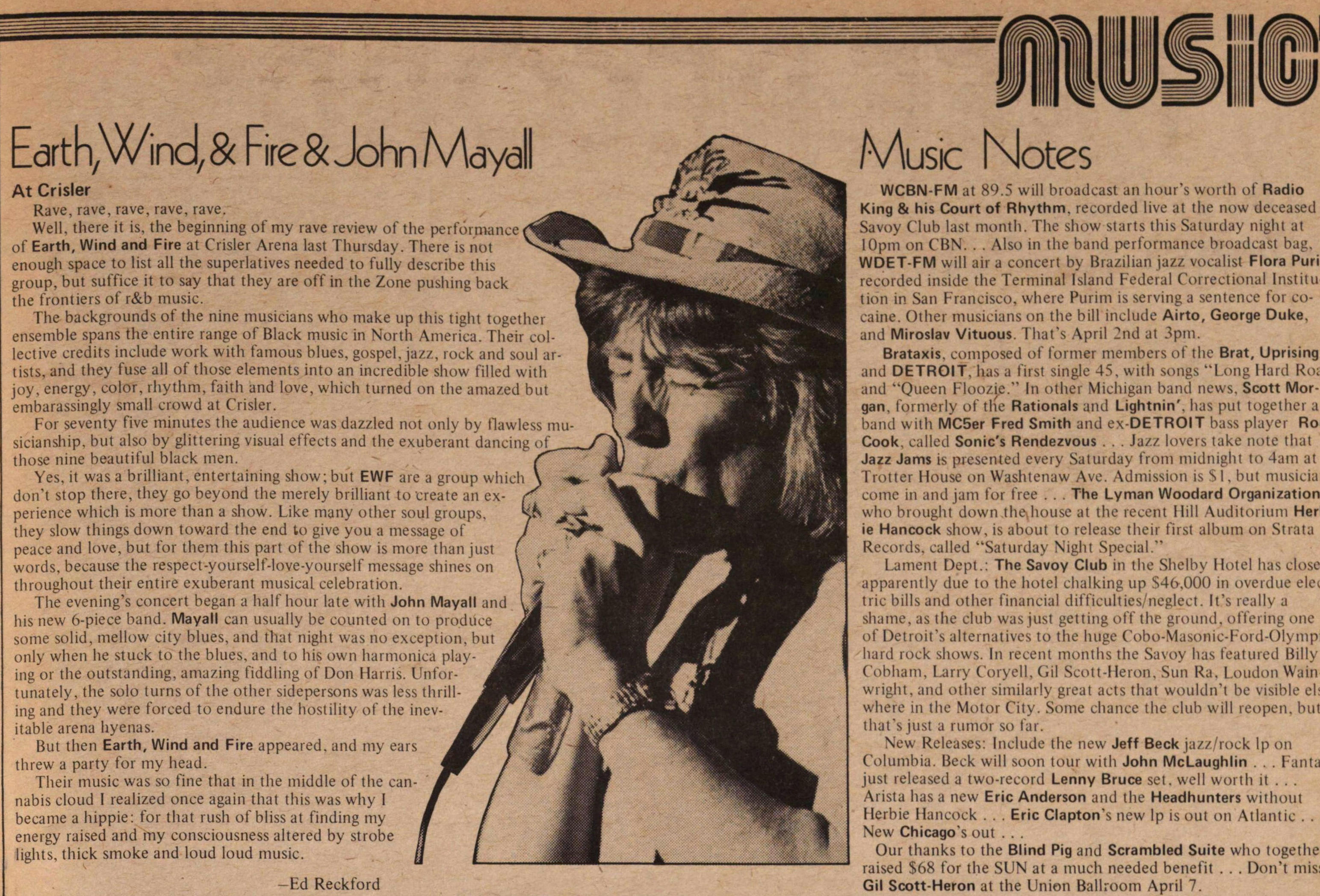 Well. there it is, the beginning of my rave review of the performances of Earth, Wind, and Fire at Crisler Arena last Thursday. There is not enough space to list all the superlatives needed to fully describe this group, but suffice it to say that they are off in the Zone pushing back the frontiers of r&b music.

The backgrounds of the nine musicians who make up this tight together ensemble spans the entire range of Black music in North America. Their collective credits include work with famous blues, gospel, jazz, rock, and soul artists, and they fuse all of those elements into an incredible show filled with joy, energy, color, rhythm, faith, and love, which turned on the amazed but embarrassingly small crowd at Crisler.

For seventy-five minutes the audience was dazzled not only by flawless musicianship but also by glittering visual effect s and the exuberant dancing of those nine beautiful black men.

Yes, it was a brilliant, entertaining show; but EWF is a group which don't stop there, they go beyond the merely brilliant to create an experience which is more than a show. Like many other soul groups. they slow things down toward the end to give you a message of peace and love, but for them this part of the show is more than just words. because the respect-yourself-love-yourself message shines on throughout their entire exuberant musical celebration.

The evening's concert began a half-hour late with John Mayall and his 6-piece band. Mayall can usually be counted on to produce some solid, mellow city blues, and that night was no exception, but otheronly when he stuck to the blues, and to his own harmonica playing or the outstanding, amazing fiddling of Don Harris. Unfortunately, the solo turns of the other sidepersons was less thrilling and they were forced to endure the hostility of the inevitable arena hyenas.

But then Earth, Wind, and Fire appeared and my ears threw a party tor my head. Their music was so fine that in the middle of the cannabis cloud I realized once again that this was why I became a hippie: for that rush of bliss at finding my energy raised and my consciousness altered by strobe lights, thick smoke, and loud loud music. -Ed Reckford