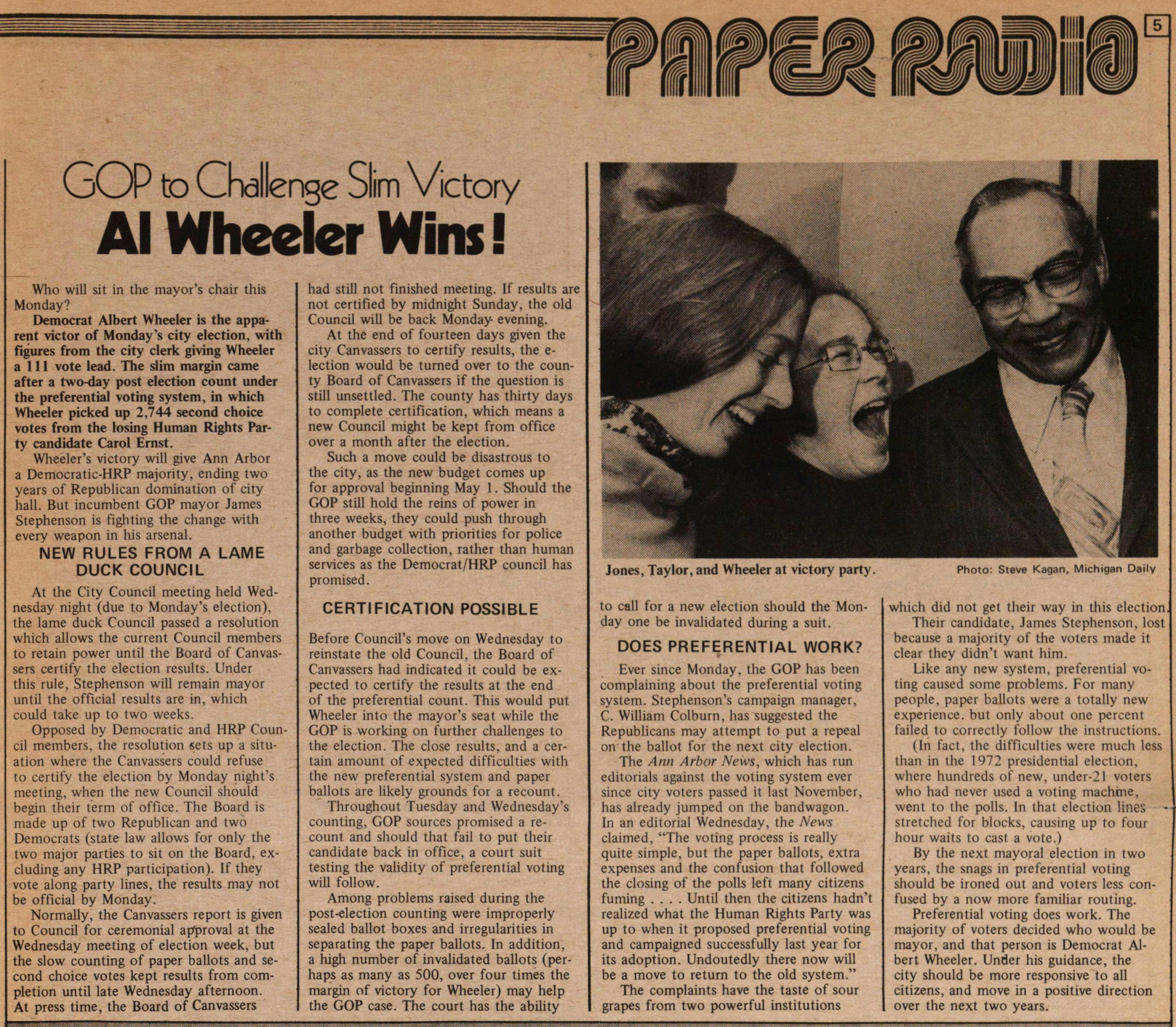 Who will sit in the mayor's chair this Monday?

Democrat Albert Wheeler is the apparent victor of Monday's city election, with figures from the city clerk giving Wheeler a 111 vote lead. The slim margin came after a two-day post election count under the preferential voting system, in which Wheeler picked up 2,744 second choice votes from the losing Human Rights Party candid to Carol Ernst.

Wheeler's victory will give Ann Arbor a Democratic-HRP majority, ending two years of Republican domination of city hall. But incumbent GOP mayor James Stephenson is fighting the change with every weapon in his arsenal.

At the City Council meeting held Wednesday night (due to Monday's election), the lame duck Council passed a resolution which allows the current Council members to retain power until the Board of Canvassers certify the election results. Under this rule, Stephenson will remain mayor until the official results are in, which could take up to two weeks.

Opposed by Democratic and HRP Council members, the resolution sets up a situation where the Canvassers could refuse to certify the election by Monday night's meeting, when the new Council should begin their term of office. The Board is made up of two Republican and two Democrats (state law allows for only the two major parties to sit on the Board, excluding any HRP participation). If they vote along party lines, the results may not be official by Monday.

Normally, the Canvassers report is given to Council for ceremonial approval at the Wednesday meeting of election week, but the slow counting of paper ballots and second choice votes kept results from completion until late Wednesday afternoon. At press time, the Board of Canvassers had still not finished meeting. If results are not certified by midnight Sunday, the old Council will be back evening.

At the end of fourteen days given the city Canvassers to certify results, the election would be turned over to the county Board of Canvassers if the question is still unsettled. The county has thirty days to complete certification, which means a new Council might be kept from office over a month after the election.

Such a move could be disastrous to the city, as the new budget comes up for approval beginning May 1. Should the GOP still hold the reins of power in three weeks, they could push through another budget with priorities for police and garbage collection, rather than human services as the Democrat HRP council has promised.

Before Council's move on Wednesday to reinstate the old Council, the Board of Canvassers had indicated it could be expected to certify the results at the end of the preferential count. This would put Wheeler into the mayor's seat while the GOP is working on further challenges to the election. The close results, and a certain amount of expected difficulties with the new preferential system and paper ballots are likely grounds for a recount.

Throughout Tuesday and Wednesday's counting, GOP sources promised a recount and should that fail to put their candidate back in office, a court suit testing the validity of preferential voting will follow.

Among problems raised during the post-election counting were improperly sealed ballot boxes and irregularities in separating the paper ballots. In addition, a high number of invalidated ballots (perhaps as many as 500, over four times the margin of victory for Wheeler) may help the GOP case. The court has the ability to call for a new election should the Monday one be invalidated during a suit.

Ever since Monday, the GOP has been complaining about the preferential voting system. Stephenson's campaign manager, C. William Colburn, has suggested the Republicans may attempt to put a repeal on the ballot for the next city election.

The Ann Arbor News, which has run editorials against the voting system ever since city voters passed it last November, has already jumped on the bandwagon. In an editorial Wednesday, the News claimed, "The voting process is really quite simple, but the paper ballots, extra expenses and the confusion that followed the closing of the polls left many citizens fuming .... Until then the citizens hadn't realized what the Human Rights Party was up to when it proposed preferential voting and campaigned successfully last year for its adoption. Undoutedly there now will be a move to return to the old system."

Their candidate, James Stephenson, lost because a majority of the voters made it clear they didn't want him.

Like any new system, preferential voting caused some problems. For many people, paper ballots were a totally new experience, but only about one percent failed to correctly follow the instructions.

(In fact. the difficulties were much less than in the 1972 presidential election, where hundreds of new, under-21 voters who had never used a voting machine, went to the polls. In that election lines stretched for blocks, causing up to four hour waits to cast a vote.)

By the next mayoral election in two years, the snags in preferential voting should be ironed out and voters less confused by a now more familiar routing.

Preferential voting does work. The majority of voters decided who would be mayor, and that person is Democrat Albert Wheeler. Under his guidance, the city should be more responsive to all citizens, and move in a positive direction over the next two years.