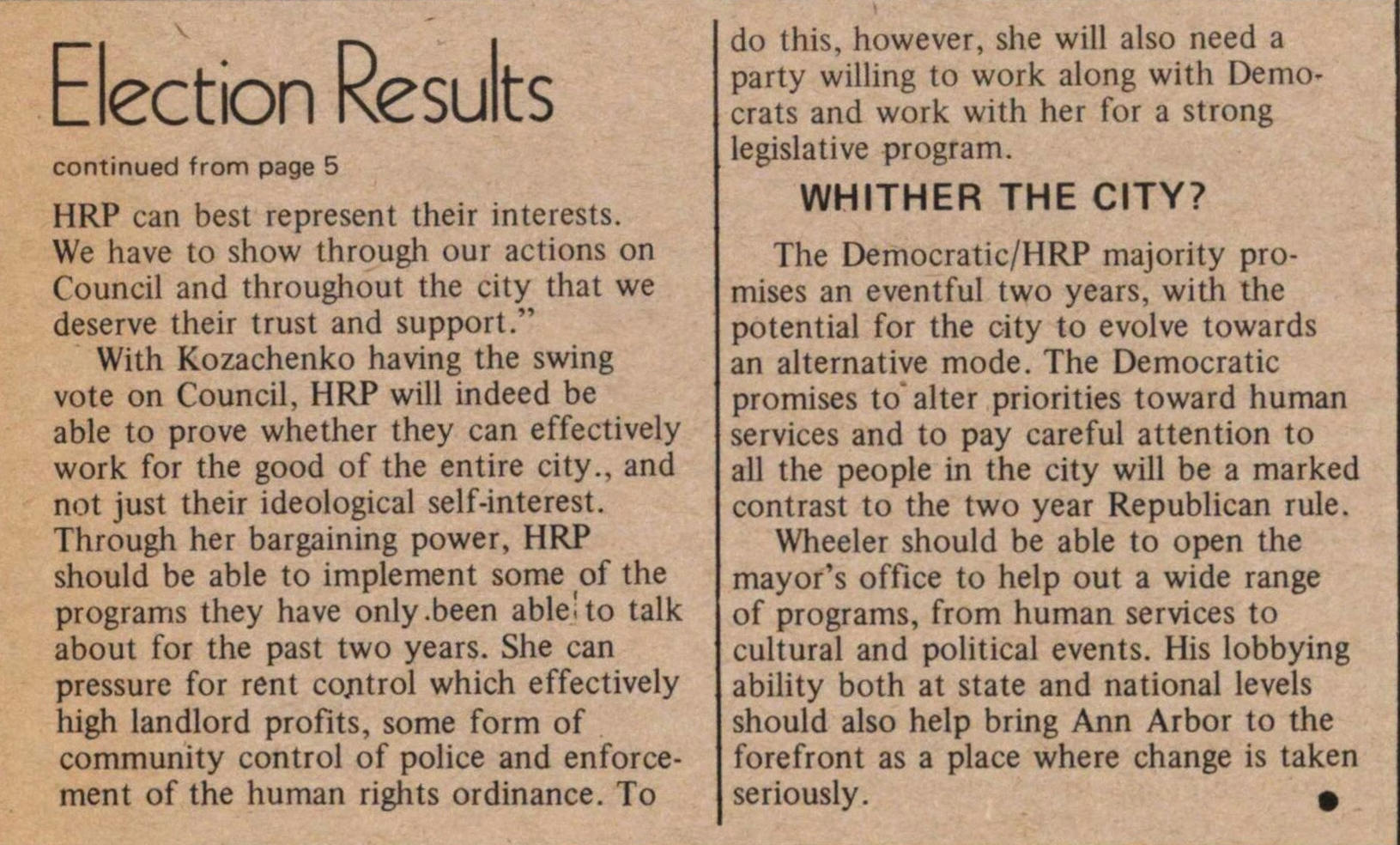 The only seat to shift in Monday's election was the mayor's, with Democrat Albert Wheeler defeating incumbent James Stephenson (as of this writing) by a narrow 111 vote margin. Wheeler's victory came two days after the election, when the new preferential voting system allowed approximately 87 percent of HRP candidate Carol Ernst's votes to be transferred to Wheeler.

The five Council posts up for election continue to be held by the parties which already possessed them. Democrats Elizabeth Taylor and Carol Jones took the First and Second Wards, with Republicans Robert Henry, Jr., William Trowbridge and Gerald Bell taking the other three. The new Council will have five Republicans and five Democrats, with HRP Council mernber Kathy Kozachenko holding the ciucial swing vote.

In other election results, all three lot proposals-day care funding, door-to-door voter registration and rent control-went down to defeat by solid margins.

The defeat of the ballot proposals and Wheeler's close victory are primarily the result of low turnout. The 29,000 people who went to the polls Monday are less than the turnout tbr either of the last two April elections. Low turnout usually rneans a higher percentage of conservatives going to the polls, which directly helped the Republicans in the Fourth Ward win.

A variety of pre-election events were instrumental in halting the trek to the polls.

First, low publicity for the candidates and ballot issues prevented any excitement from building before the election. GOP incumbent James Stephenson purposely waged a low visibility campaign, a tactic which is usually beneficial to the incumbent. With two years of headlines behind him, Stephensons's name was better known than his record. By simply avoiding confrontations with the other candidates, Stephenson hoped to regain his seat. His efforts were helped along by the Democrats, who ran a poorly organized campaign based largely on dull issues. With funding down for Albert Wheeler's campaign due to the economy and racism within the ranks, the Democratic mayoral candidate was not able to gain enough visibility. The small winning margin Wheeler picked up through second choice HRP votes barely pushed him into office. The ballot issues, which might have helped draw attention to the overall election, lacked money to overcome the adverse publicity due to negative rulings by the state Attorney General, well-funded campaigns against them, and attacks by both Democrats and Republicans. In addition, both the Ann Arbor News and the Michigan Daily limited their coverage, cutting off the major source of information about the campaign for most people.

A second factor was a series of partisan brickbats thrown around throughout the campaign, increasing cynicism in voters already disillusioned by the dirty politics of "Watergate." Besides the usual name calling in public appearances and campaign literature in all races, the Second Ward campaign hurt all three parties. The hubbub over "vote-crossing" during the primary, and the questionable ordinance passed by the HRP and Republicans to put Frank Shoichet on the ballot in particular affected the HRP. Shoichet had one of the lowest vote totals of any HRP candidate ever to run in the Second Ward, considered an HRP stronghold.

The Human Rights Party suffered overwhelming defeat, with both their ballot proposals and all five candidates losing by heavy margins. Without Kozachenko's Council seat, the radical third party might have come to a virtual halt following this election.

The HRP was hurt during the campaign by Shoichet's antics over his defeat in the Second Ward primary. His attempts to blame the Democrats backfired and adverse publicity directly ended his chances for winning. In addition, the HRP once again contributed to the election of a Republican in the Fourth Ward, where Judy Gibson's 583 votes are just over the margin by which Democrat Bill Bronson lost to William Trowbridge. Only Wheeler's close win in the mayor's race prevented a return of the GOP majority.

"The election was a significant setback," commented David Goodman, defeated HRP First Ward candidate, "atthough it has to be remembered that we were up against tough opposition in our two strongest wards.

"I think HRP has been given both a warning and a reprieve-a warning that we have to begin to show to people that HRP can best represent their interests. We have to show through our actions on Council and throughout the city that we deserve their trust and support."

With Kozachenko having the swing vote on Council, HRP will indeed be able to prove whether they can effectively work for the good of the entire city, and not just their ideological self-interest. Through her bargaining power, HRP should be able to implement some of the programs they have only been able to talk about for the past two years. She can pressure for rent control which effectively high landlord profits, some form of community control of police and enforcement of the human rights ordinance. To do this, however, she will also need a party willing to work along with Democrats and work with her for a strong legislative program.

The Democratic/HRP majority promises an eventful two years, with the potential for the city to evolve towards an alternative mode. The Democratie promises to alter priorities toward human services and to pay careful attention to all the people in the city will be a marked contrast to the two year Republican rule.

Wheeler should be able to open the mayor's office to help out a wide range of programs, from human services to cultural and political events. His lobbying ability both at state and national levels should also help bring Ann Arbor to the forefront as a place where change is taken seriously.