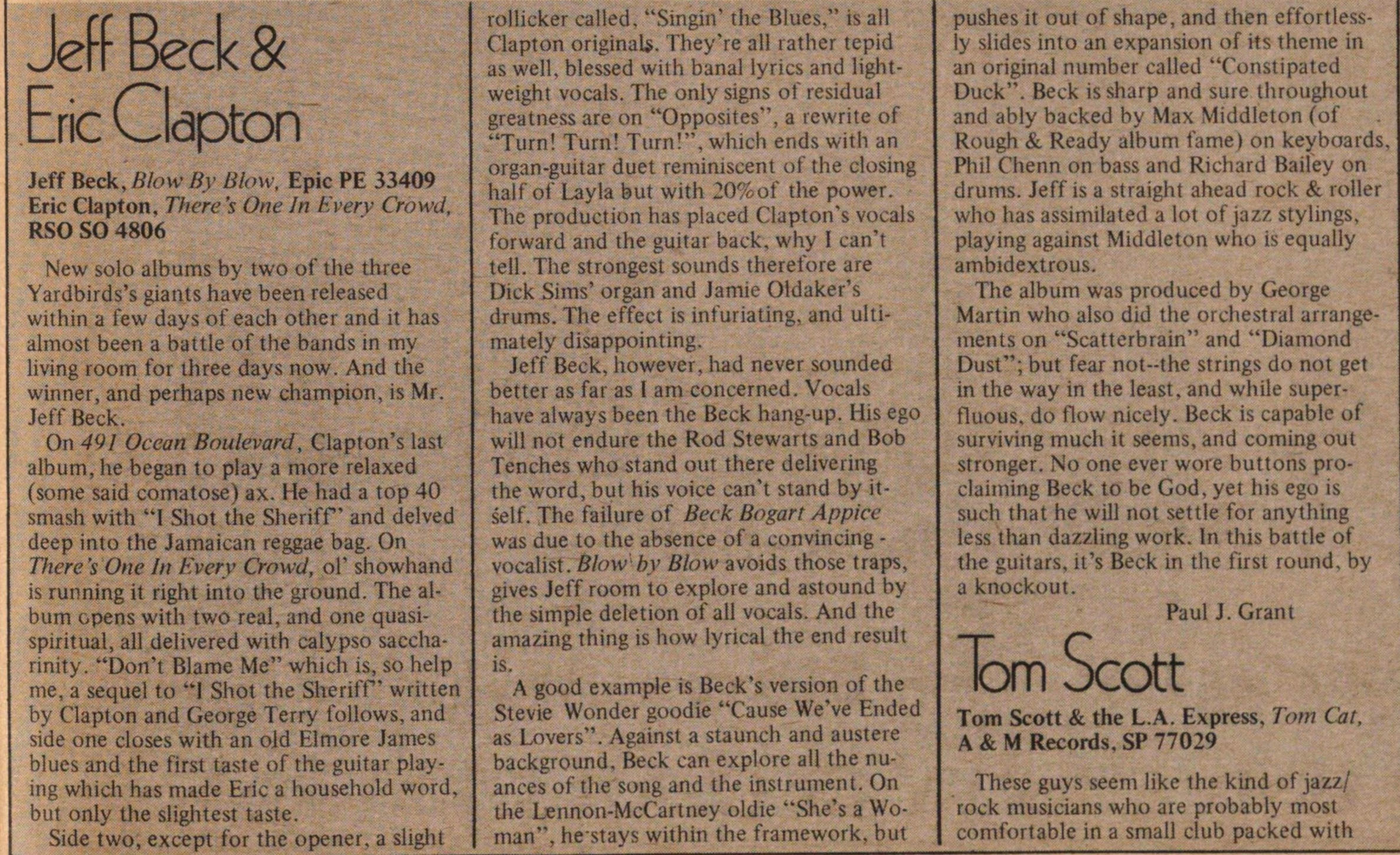 New solo albums by two of the three Yardbirds's giants have been released within a few days of each other and it has almost been a battle of the bands in my living room for three days now. And the winner, and perhaps new champion, is Mr. Jeff Beck.

On 49! Ocean Boulevard, Clapton's last album, lie began to play a more relaxed (some said comatose) ax. He had a top 40 smash with "I Shot the Sheriff' and delved deep into the Jamaican reggae bag. On There's One n Every Crowd, ol' showhand is running it right into the ground. The album opens with two real, and one quasi-spiritual, all delivered with calypso saccharinity. "Don't Blame Me" which is, so help me, a sequel to "I Shot the Sheriff written by Clapton and George Terry follows, and side one closes with an old Elmore James blues and the first taste of the guitar playing which has made Eric a household word. but only the slightest taste.

Side two, except for the opener, a slight rollicker called. "Singin' the Blues" is all Clapton original. They're all rather tepid as well, blessed with banal lyrics and lightweight vocals. The only signs of residual greatness are on "Opposites", a rewrite of "Turn! Turn! Turn!", which ends with an organ-guitar duet reminiscent of the closing half of Layla but with 20% of the power. The production has placed Clapton's vocals forward and the guitar back. why I can't tell. The strongest sounds therefore are Dick Sims' organ and Jamie Oldaker's drums. The effect is infuriating, and ultimately disappointing.

Jeff Beck, however, had never sounded better as far as I am concerned. Vocals have always been the Beck hang-up. His ego will not endure the Rod Stewarts and Bob Tenches who stand out there delivering the word, but his voice can't stand by itself. The failure of Beck Bogart Appice was due to the absence of a convincing - vocalist. Blow by Blow avoids those traps, gives Jeff room to explore and astound by the simple deletion of all vocals. And the amazing thing is how lyrical the end result is.

A good example is Beck's version of the Stevie Wonder goodie "Cause We've Ended as Lovers". Against a staunch and austere background. Beck can explore all the nuances of the song and the instrument. On the Lennon-McCartney oldie "She's a Woman", he stays within the framework, but pushes it out of shape, and then effortlessly slides into an expansion of its theme in an original number called "Constipated Duck". Beck is sharp and sure throughout and ably backed by Max Middleton (of Rough & Ready album lame) on keyboards, Phil Chenn on bass and Richard Bailey on drums. Jeff is a straight ahead rock & roller who has assimilated a lot of jazz stylings, playing against Middleton who is equally ambidextrous.

The album was produced by George Martin who also did the orchestral arrangements on "Scatterbrain" and "Diamond Dust"; but fear not--the strings do not get in the way in the least, and while superfluous. do flow nicely. Beck is capable of surviving much it seems, and coming out stronger. No one ever wore buttons proclaiming Beck to be God, yet his ego is such that he will not settle for anything less than dazzling work. In this battle of the guitars, it's Beck in the first round, by a knockout.