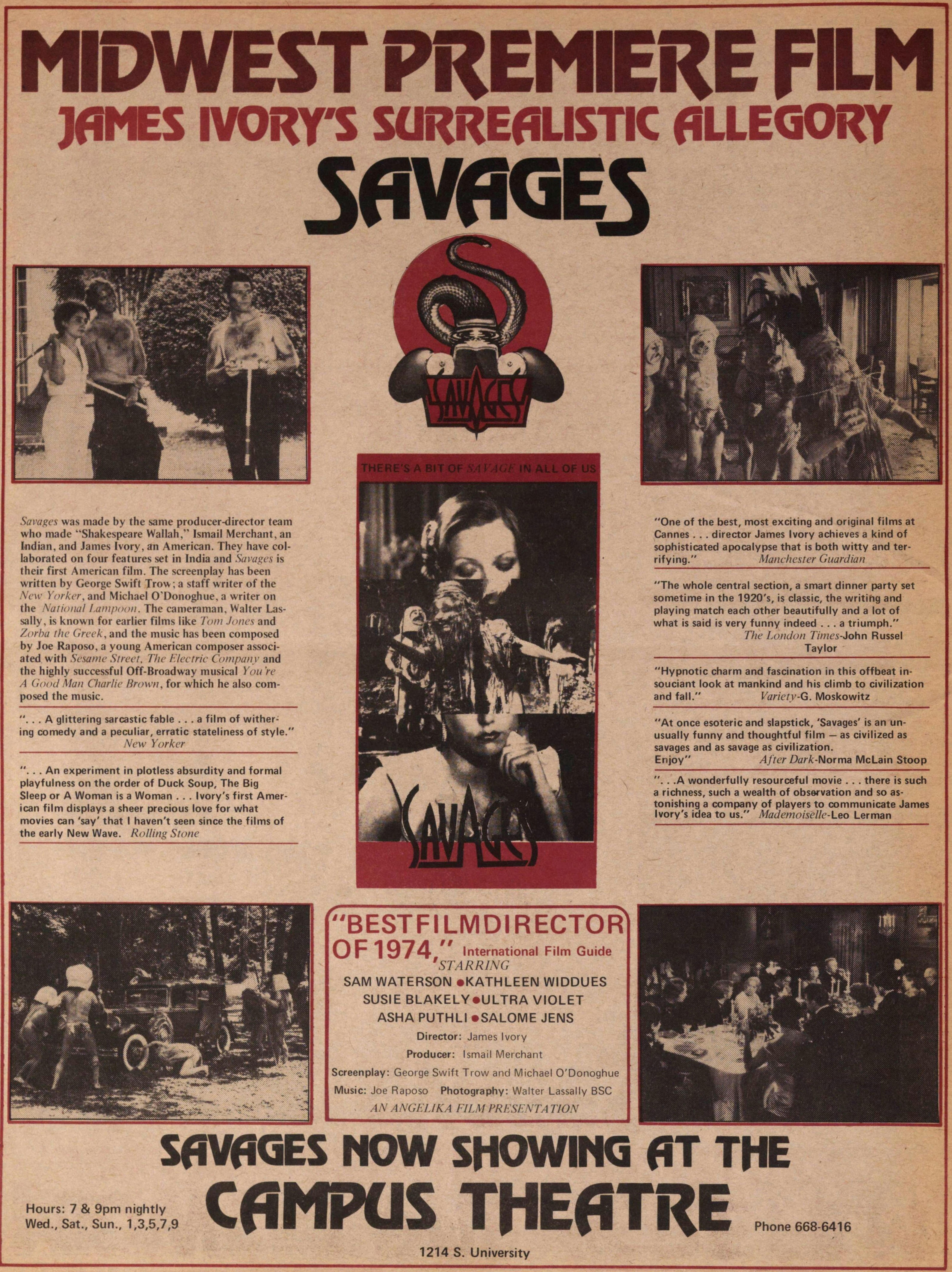 Savages was made by the same producer-director team who made “Shakespeare Wallah,” Ismail Merchant, an Indian, and James Ivory, and American. They have collaborated on four features set in India and Savages is their first American film. The screenplay has been written by George Swift Trow; a staff writer of the New Yorker, and Michael O'Donoghue, a writer on the National Lampoon. The cameraman, Walter Lassally, is known for earlier films like Tom Jones and Zorba the Greek, and the music has been composed by Joe Raposo, a young American composer associated with Sesame Street, The Electric Company and the highly successful Off-Broadway musical You're A Good Man Charlie Brown, for which he also composed the music.

". . . A glittering sarcastic fable . . . a film of withering comedy and a peculiar, erratic stateliness of style."
New Yorker

". . . An experiment in plotless absurdity and formal playfulness on the order of Duck Soup, The Big Sleep or A Woman is a Woman . . . Ivory's first American film displays a sheer precious love for what movies can ‘say’ that I haven’t seen since the films of the early New Wave. Rolling Stone

"One of the best, most exciting and original films at Cannes . . . director James Ivory achieves a kind of sophisticated apocalypse that is both witty and terrifying." Manchester Guardian

"The whole central section, a smart dinner party set sometime in the 1920's, is classic, the writing and playing match each other beautifully and a lot of what is said is very funny indeed . . . a triumph."
The London Times-John Russel Taylor

"Hypnotic charm and fascination in this offbeat insouciant look at mankind and his climb to civilization and fall." Variety-G. Moskowitz

"At once esoteric and slapstick, 'Savages' is an unusually funny and thoughtful film – as civilized as savages and as savage as civilization. Enjoy" After Dark-Norma McLain Stoop

“. . .A wonderfully resourceful movie . . . there is such a richness, such a wealth of observation and so astonishing a company of players to communicate James Ivory’s idea to us.” Mademoiselle-Leo Lerman