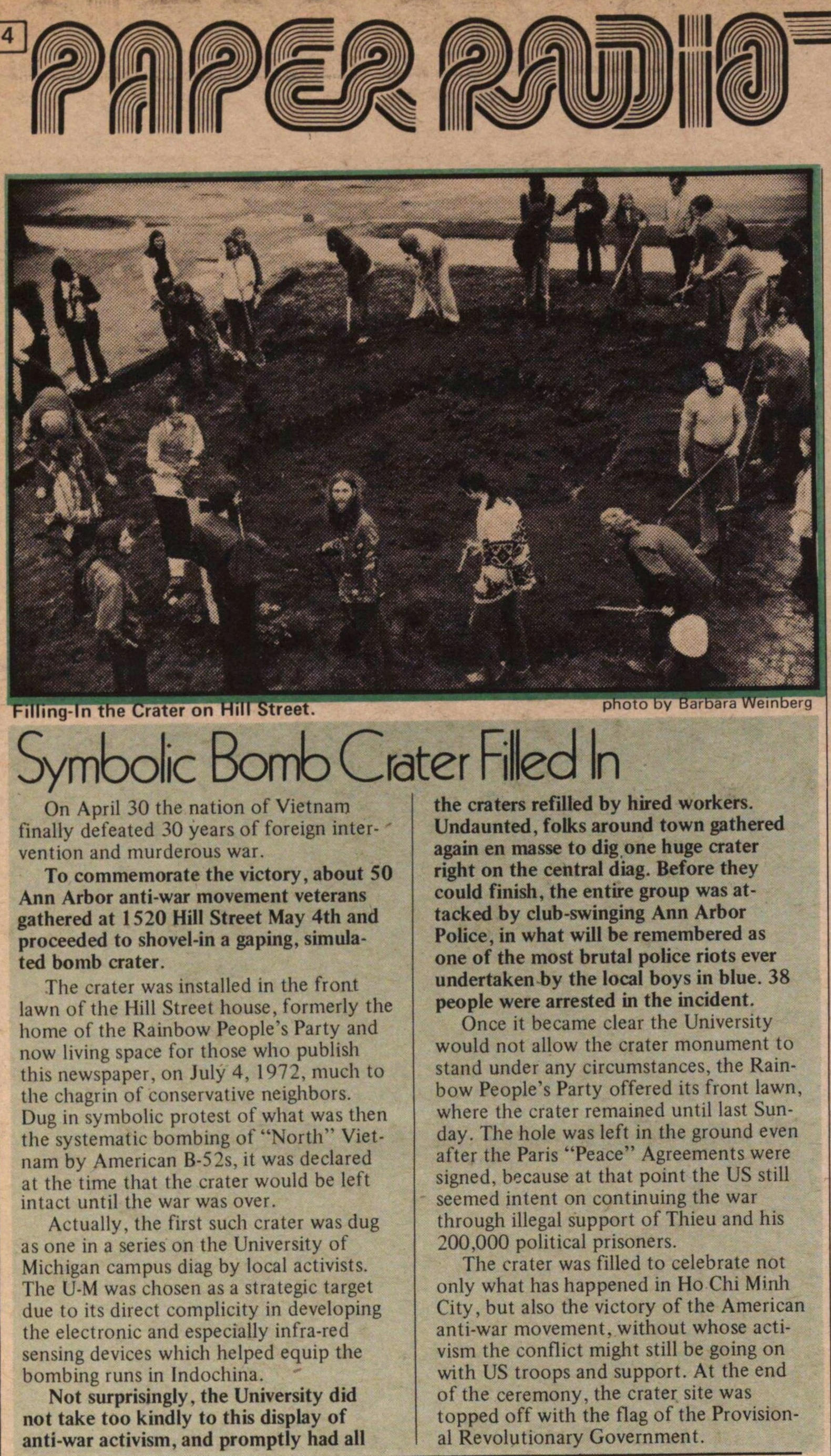 On April 30 the nation of Vietnam finally defeated 30 years of foreign intervention and murderous war.

To commemorate the victory, about 50 Ann Arbor anti-war movement veterans gathered at 1520 Hill Street May 4th and proceeded to shovel in a gaping, simulated bomb crater.

The crater was installed in the front of the Hill Street house, formerly the home of the Rainbow People's Party and now living space for those who publish this newspaper, on July 4, 1972, much to the chagrin of conservative neighbors. Dug in symbolic protest of what was the n the systematic bombing of the "North" Vietnam by Americans B-52's, it was declared at the time the crater would be left intact until the war was over.

Actually, the first such crater was dug as one in a series on the University of Michigan campus diag by the whole activists. The UM was chosen as a strategic target due to its direct complicity in developing the electronic and infrared sensing devices which helped equip the bombing runs in Indochina.

Not surprisingly, the University did not take too kindly to this display of anti-war activism, and promptly had all the craters refilled by hired workers. Undaunted, folks around town gathered en mass to dig one huge crater right on the central diag. Before they could finish, the entire group was attacked by club-swinging Ann Arbor Police, in what will be remembered as one of the most brutal police riots ever undertaken by the local boys in blue. 38 people were arrested in the incident.

Once it became clear the University would not allow the crater monument to stand under any circumstances, the Rainbow People's Party offered its front lawn, where the crater remained until last Sunday. The hole was left in the ground even after the Paris "Peace" Agreements were signed, because at that point the US still seemed intent on continuing the war through illegal support of Thieu and his 200,000 political prisoners.

The crater was filled to celebrate not only what has happened to Ho Chi Minh City, but also the victory of the American anti-war movement, without whose activism the conflict might still be going on with US troops and support. At the end of the ceremony, the crater site was topped off with the flag of the Provisional Revolutionary Government.