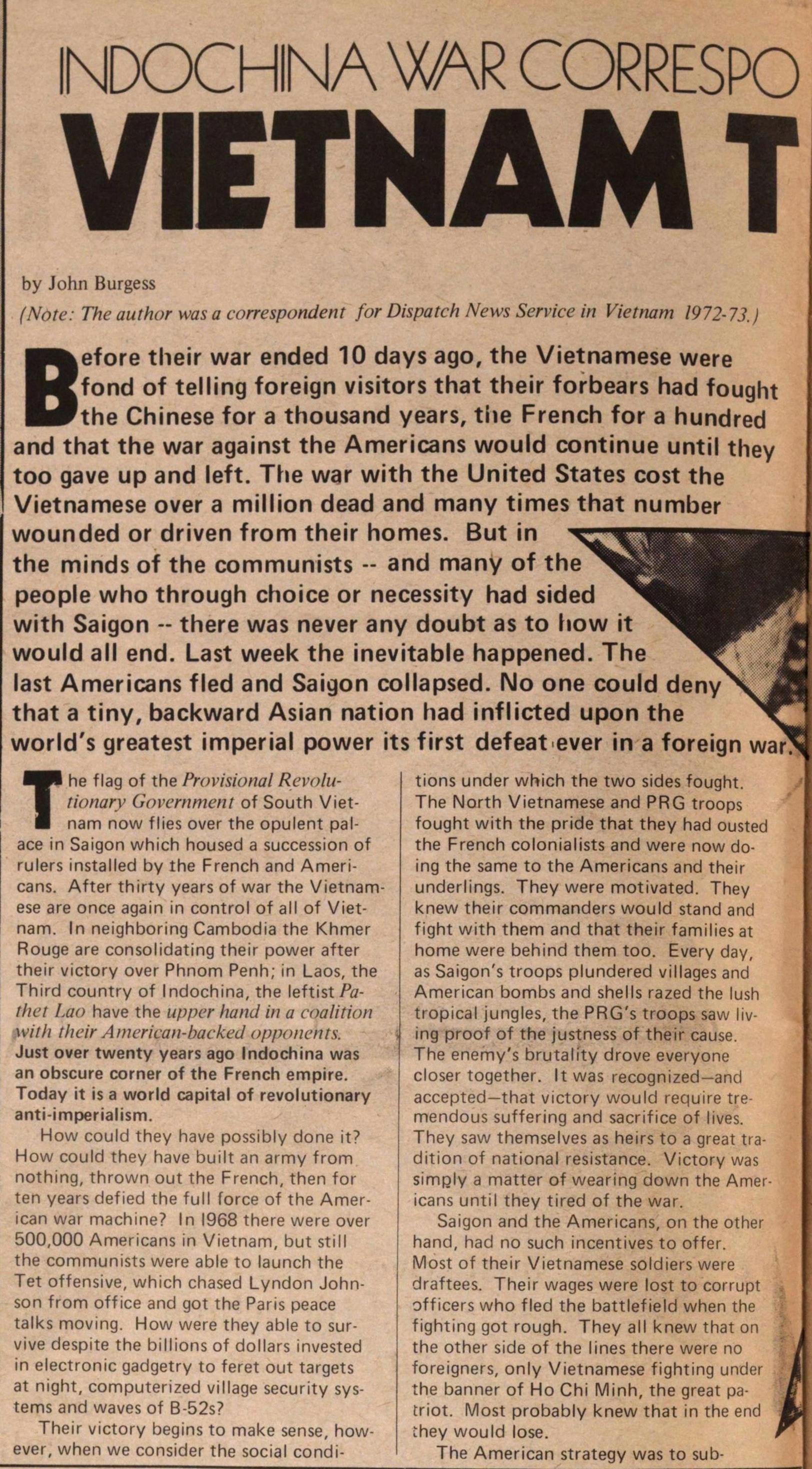 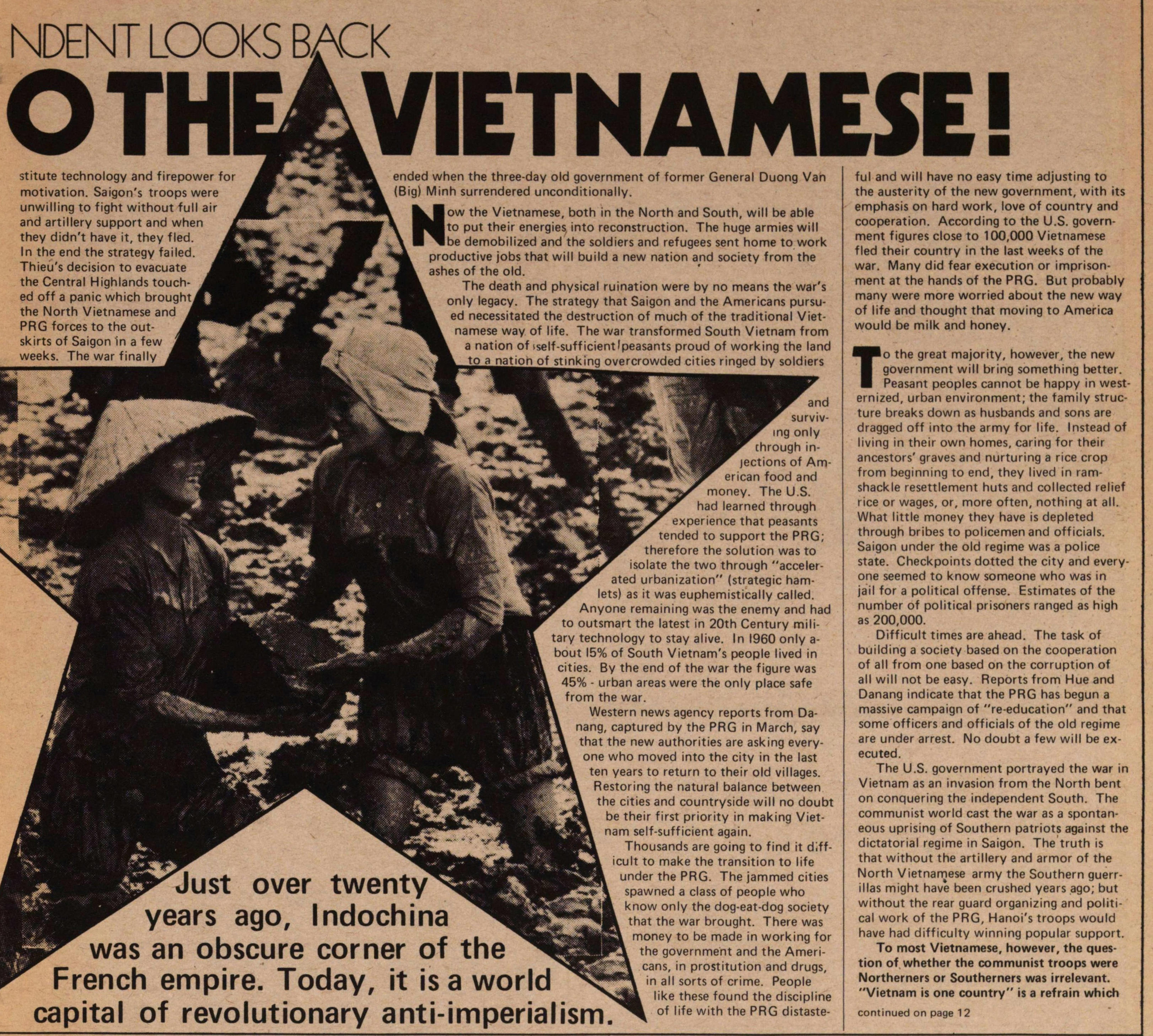 VIETNAM TO THE VIETNAMESE!

by John Burgess  (Note: The author was a correspondent for Dispatch News Service in Vietnam 1972-73.)

Before their war ended 10 days ago, the Vietnamese were fond of telling foreign visitors that their forbears had fought the Chinese for a thousand years, the French for a hundred and that the war against the Americans would continue until they too gave up and left.  The war with the United States cost the Vietnamese over a million dead and many times that number wounded or driven from their homes.  But in "the minds of the communists -- and many of the people who through choice or necessity had sided with Saigon -- there was never any doubt as to how it would all end.  Last week the inevitable happened. The last Americans fled and Saigon collapsed.  No one could deny that a tiny, backward Asian nation had inflicted upon the world's greatest imperial power its first defeat ever in a foreign war.

The flag of the Provisional Revolutionary Government of South Vietnam now flies over the opulent palace in Saigon which housed a succession of rulers installed by the French and Americans.  After thirty years of war the Vietnamese are once again in control of all of Vietnam.  In neighboring Cambodia the Khmer Rouge are consolidating their power after their victory over Phnom Penh; in Laos, the Third country of Indochina, the leftist Pathet Lao have the upper hand in a coalition with their American-backed opponents.  Just over twenty years ago Indochina was an obscure corner of the French empire.  Today it is a world capital of revolutionary anti-imperialism.

How could they have possibly done it?  How could they have built an army from nothing, thrown out the French, then for ten years defied the full force of the American war machine?  In 1968 there were over 500,000 Americans in Vietnam, but still the communists were able to launch the Tet offensive, which chased Lyndon Johnson from office and got the Paris peace talks moving.  How were they able to survive despite the billions of dollars invested in electronic gadgetry to ferret out targets at night, computerized village security systems and waves of B-52s?

Their victory begins to make sense, however, when we consider the social conditions under which the two sides fought.  The North Vietnamese and PRG troops fought with the pride that they had ousted the French colonialists and were now doing the same to the Americans and their underlings.  They were motivated.  They knew their commanders would stand and fight with them and that their families at home were behind them too.  Every day, as Saigon's troops plundered villages and American bombs and shells razed the lush tropical jungles, the PRG's troops saw living proof of the justness of their cause.  The enemy's brutality drove everyone closer together.  It was recognized--and accepted--that victory would require tremendous suffering and sacrifice of lives.  They saw themselves as heirs to a great tradition of national resistance.  Victory was simply a matter of wearing down the Americans until they tired of the war.

Saigon and the Americans, on the other hand, had no such incentives to offer.  Most of their Vietnamese soldiers were draftees.  Their wages were lost to corrupt officers who fled the battlefield when the fighting got rough.  They all knew that on the other side of the lines there were no foreigners, only Vietnamese fighting under the banner of Ho Chi Minh, the great patriot.  Most probably knew that in the end they would lose.

The American strategy was to substitute technology and firepower for motivation.  Saigon's troops were unwilling to fight without full air and artillery support and when they didn't have it, they fled.  In the end the strategy failed.  Thieu's decision to evacuate the Central Highlands touched off a panic which brought the North Vietnamese and PRG forces to the outskirts of Saigon in a few weeks.  The war finally ended when the three-day old government of former General Duong Van (Big) Minh surrendered unconditionally.

Now the Vietnamese, both in the North and South, will be able to put their energies into reconstruction.  The huge armies will be demobilized and the soldiers and refugees sent home to work productive jobs that will build a new nation and society from the ashes of the old.

The death and physical ruination were by no means the war's only legacy.  The strategy that Saigon and the Americans pursued necessitated the destruction of much of the traditional Vietnamese way of life.  The war transformed South Vietnam from a nation of self-sufficient peasants proud of working the land to a nation of stinking overcrowded cities ringed by soldiers and surviving only through injections of American food and money.  The U.S. had learned through experience that peasants tended to support the PRG; therefore the solution was to isolate the two through "accelerated urbanization" (strategic hamIets) as it was euphemistically called.  Anyone remaining was the enemy and had to outsmart the latest in 20th Century military technology to stay alive.  In 1960 only about 15% of South Vietnam's people lived in cities.  By the end of the war the figure was 45% - urban areas were the only place safe from the war.

Western news agency reports from Danang, captured by the PRG in March, say that the new authorities are asking everyone who moved into the city in the last ten years to return to their old villages.  Restoring the natural balance between the cities and countryside will no doubt be their first priority in making Vietnam self-sufficient again.

Thousands are going to find it diffcult to make the transition to life under the PRG.  The jammed cities spawned a class of people who know only the dog-eat-dog society that the war brought.  There was money to be made in working for the government and the Americans, in prostitution and drugs, in all sorts of crime.  People like these found the discipline of life with the PRG distasteful and will have no easy time adjusting to the austerity of the new government, with its emphasis on hard work, love of country and cooperation.  According to the U.S. government figures close to 100,000 Vietnamese fled their country in the last weeks of the war. Many did fear execution or imprisonment at the hands of the PRG.  But probably many were more worried about the new way of life and thought that moving to America would be milk and honey.

To the great majority, however, the new government will bring something better.  Peasant peoples cannot be happy in westernized, urban environment; the family structure breaks down as husbands and sons are dragged off into the army for life.  Instead of living in their own homes, caring for their ancestors' graves and nurturing a rice crop from beginning to end, they lived in ramshackle resettlement huts and collected relief rice or wages, or, more often, nothing at all.  What little money they have is depleted through bribes to policemen and officials.  Saigon under the old regime was a police state.  Checkpoints dotted the city and everyone seemed to know someone who was in jail for a political offense.  Estimates of the number of political prisoners ranged as high as 200,000.

Difficult times are ahead.  The task of building a society based on the cooperation of all from one based on the corruption of all will not be easy.  Reports from Hue and Danang indicate that the PRG has begun a massive campaign of "re-education" and that some officers and officials of the old regime are under arrest.  No doubt a few will be executed.

The U.S. government portrayed the war in Vietnam as an invasion from the North bent on conquering the independent South.  The communist world cast the war as a spontaneous uprising of Southern patriots against the dictatorial regime in Saigon.  The truth is that without the artillery and armor of the North Vietnamese army the Southern guerrillas might have been crushed years ago; but without the rear guard organizing and political work of the PRG, Hanoi's troops would have had difficulty winning popular support.

To most Vietnamese, however, the question of whether the communist troops were Northerners or Southerners was irrelevant.  "Vietnam is one country" is a refrain which