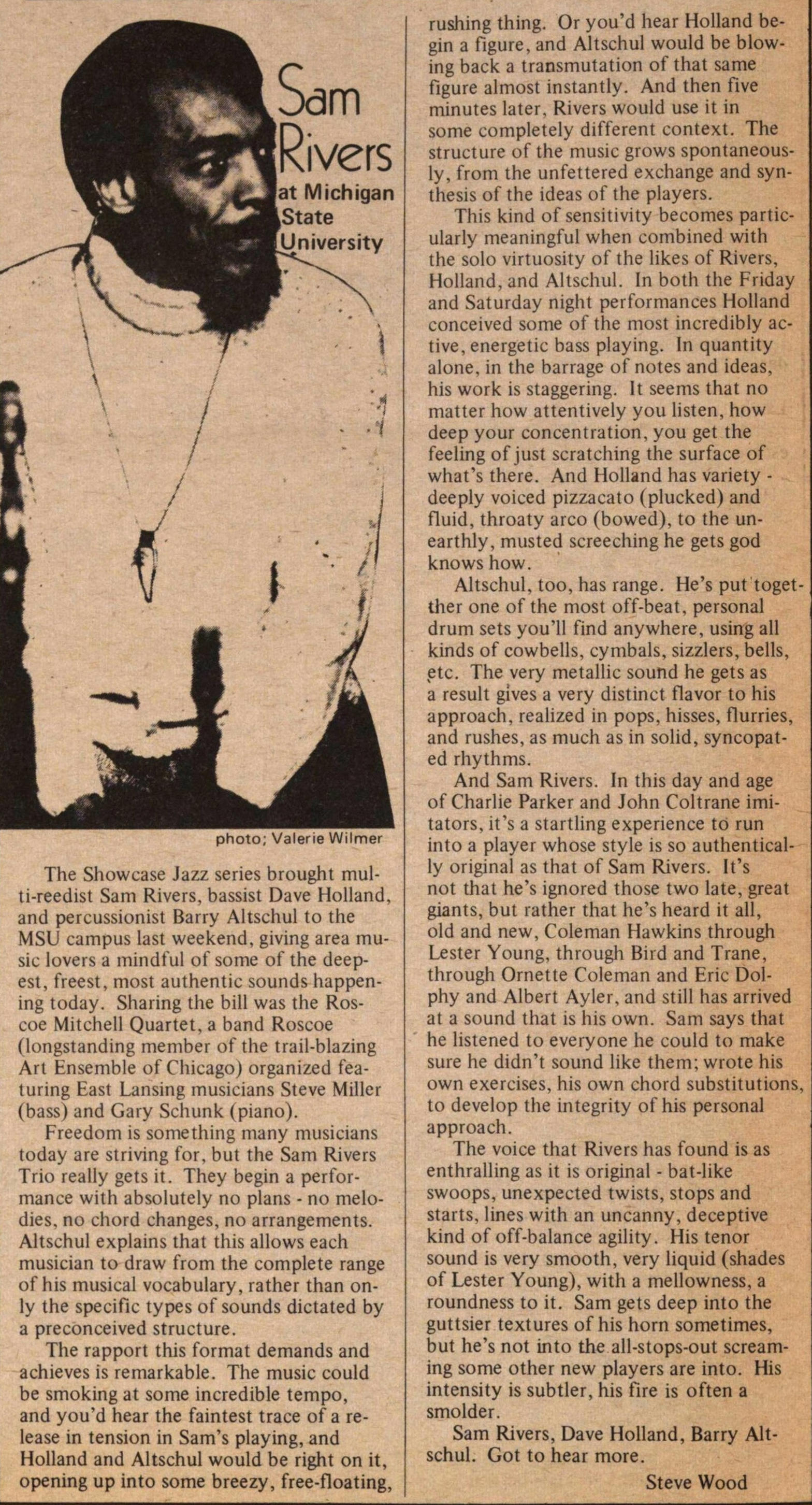 Freedom is something many musicians today are striving for, but the Sam Rivers Trio really gets it. They begin a performance with absolutely no plans - no melodies. no chord changes, no arrangements. Altschul explains that this allows each musician to draw from the complete range of his musical vocabulary, rather than only the specific types of sounds dictated by a preconceived structure.

The rapport this format demands and achieves is remarkable. The music could be smoking at some incredible tempo, and you'd hear the faintest trace of a release in tension in Sam's playing, and Holland and Altschul would be right on it, opening up into some breezy, free-floating, rushing thing. Or you'd hear Holland begin a figure, and Altschul would be blowing back a transmutation of that same figure almost instantly. And then five minutes later, Rivers would use it in some completely different context. The structure of the music grows spontaneously, from the unfettered exchange and synthesis of the ideas of the players.

This kind of sensitivity becomes particularly meaningful when combined with the solo virtuosity of the likes of Rivers, Holland, and Altschul. In both the Friday and Saturday night performances Holland conceived some of the most incredibly active, energetic bass playing. In quantity alone, in the barrage of notes and ideas, his work is staggering. It seems that no matter how attentively you listen, how deep your concentration, you get the feeling of just scratching the surface of what's there. And Holland has variety - deeply voiced pizzacato (plucked) and fluid, throaty arco (bowed), to the unearthly, musted screeching he gets god knows how.

Altschul, too, has range. He's put together one of the most off-beat, personal drum sets you'll find anywhere, using all kinds of cowbells, cymbals, sizzlers, bells, etc. The very metallic sound he gets as a result gives a very distinct flavor to his approach, realized in pops, hisses, flurries, and rushes, as much as in solid, syncopated rhythms.

And Sam Rivers. In this day and age of Charlie Parker and John Coltrane imitators, it's a startling experience to run into a player whose style is so authentically original as that of Sam Rivers. It's not that he's ignored those two late, great giants, but rather that he's heard it all, old and new, Coleman Hawkins through Lester Young, through Bird and Trane, through Ornette Coleman and Eric Dolphy and Albert Ayler, and still has arrived at a sound that is his own. Sam says that he listened to everyone he could to make sure he didn't sound like them; wrote his own exercises, his own chord substitutions, to develop the integrity of his personal approach.

The voice that Rivers has found is as enthralling as it is original - bat-like swoops, unexpected twists, stops and starts, lines with an uncanny, deceptive kind of off-balance agility. His tenor sound is very smooth, very liquid (shades of Lester Young), with a mellowness, a roundness to it. Sam gets deep into the guttsier textures of his horn sometimes, but he's not into the all-stops-out screaming some other new players are into. His intensity is subtler, his fire is often a smolder.