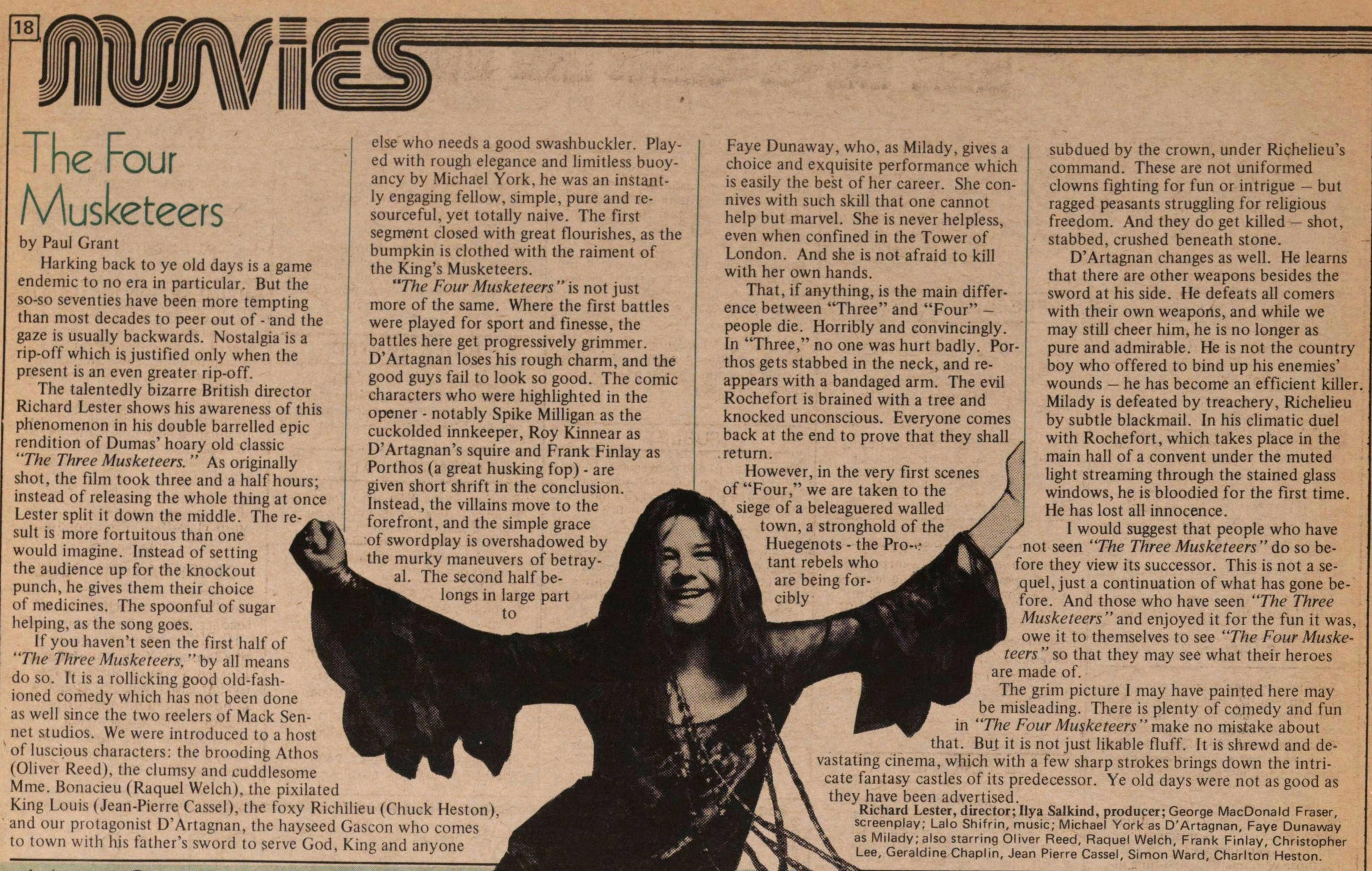 Harking back to ye old days is a game endemic to no era in particular. But the so-so seventies have been more tempting than most decades to peer out of-and the gaze is usually backwards. Nostalgia is a rip-off which is justified only when the present is an even greater rip-off.

The talentedly bizarre British director Richard Lester shows his awareness of this phenomenon in his double barrelled epic rendition of Dumas' hoary old classic "The Three Musketeers. " As originally shot, the film took three and a half hours; instead of releasing the whole thing at once Lesler split it down the middle. The result is more fortuitous than one would imagine. Instead of setting the audience up for the knockout punch, he gives them their choice of medicines. The spoonful of sugar helping, as the song goes.

If you haven't seen the first half of "The Three Musketeers, "by all means do so. It is a rollicking good old fashioned comedy which has not been done as well since the two reelers of Mack Sennet studios. We were introduced to a host of luscious characters: the brooding Athos (Oliver Reed), the clumsy and cuddlesome Mme. Bonacieu (Raquel Welch), the pixilated King Louis (Jean-Pierre Cassel), the foxy Richilieu (Chuck Heston), and our protagonist D'Artagnan, the hayseed Gascon who comes to town witli his father's sword to serve God, King and anyone else who needs a good swashbuckler. Played with rough elegance and limitless buoyancy by Michael York, he was an instantly engaging fellow, simple, pure and resourceful, yet totally naive. The first segment closed with great flourishes, as the bumpkin is clothed with the raiment of the King's Musketeers.

"The Four Musketeers " is not just more of the same. Where the first battles were played for sport and finesse, the battles here get progressively grimmer. D'Artagnan loses his rough charm, and the good guys fail to look so good. The comic characters who were highlighted in the opener-notably Spike Milligan as the cuckolded innkeeper, Roy Kinnear as D'Artagnan's squire and Frank Finlay as Porthos (a great husking fop) - are given short shrift in the conclusion. Instead, the villains move to the forefront, and the simple grace of swordplay is overshadowed by the murky maneuvers of betrayal.

The second half longs in large part to Faye Dunaway, who, as Milady, gives a choice and exquisite performance which is easily the best of her career. She connives with such skill that one cannot help but marvel. She is never helpless, even when confined in the Tower of London. And she is not afraid to kill with her own hands.

That, if anything, is the main difference between "Three" and "Four"-people die. Horribly and convincingly. In "Three," no one was hurt badly. Porthos gets stabbed in the neck, and reappears with a bandaged arm. The evil Rochefort is brained with a tree and knocked unconscious. Everyone comes back at the end to prove that they shall return.

However, in the very first scenes of "Four," we are taken to the siege of a beleaguered walled town, a stronghold of the Huegenots - the Protestant rebels who are being forcibly subdued by the crown, under Richelieu's command. These are not uniformed clowns fighting for fun or intrigue-but ragged peasants struggling for religious freedom. And they do get killed-shot, stabbed, crushed beneath stone.

D'Artagnan changes as well. He learns that there are other weapons besides the sword at his side. He defeats all comers with their own weapons, and while we may still cheer him, he is no longer as pure and admirable. He is not the country boy who offered to bind up his enemies' wounds-he has become an efficient killer. Milady is defeated by treachery, Richelieu by subtle blackmail. In his climatic duel with Rochefort, which takes place in the main hall of a convent under the muted light streaming through the stained glass windows, he is bloodied for the first time. He has lost all innocence.

The grim picture I may have painted here may be misleading. There is plenty of comedy and fun in "The Four Musketeers " make no mistake about that. But it is not just likable fluff. It is shrewd and devastating cinema, which with a few sharp strokes brings down the intricate fantasy castles of its predecessor. Ye old days were not as good as they have been advertised.