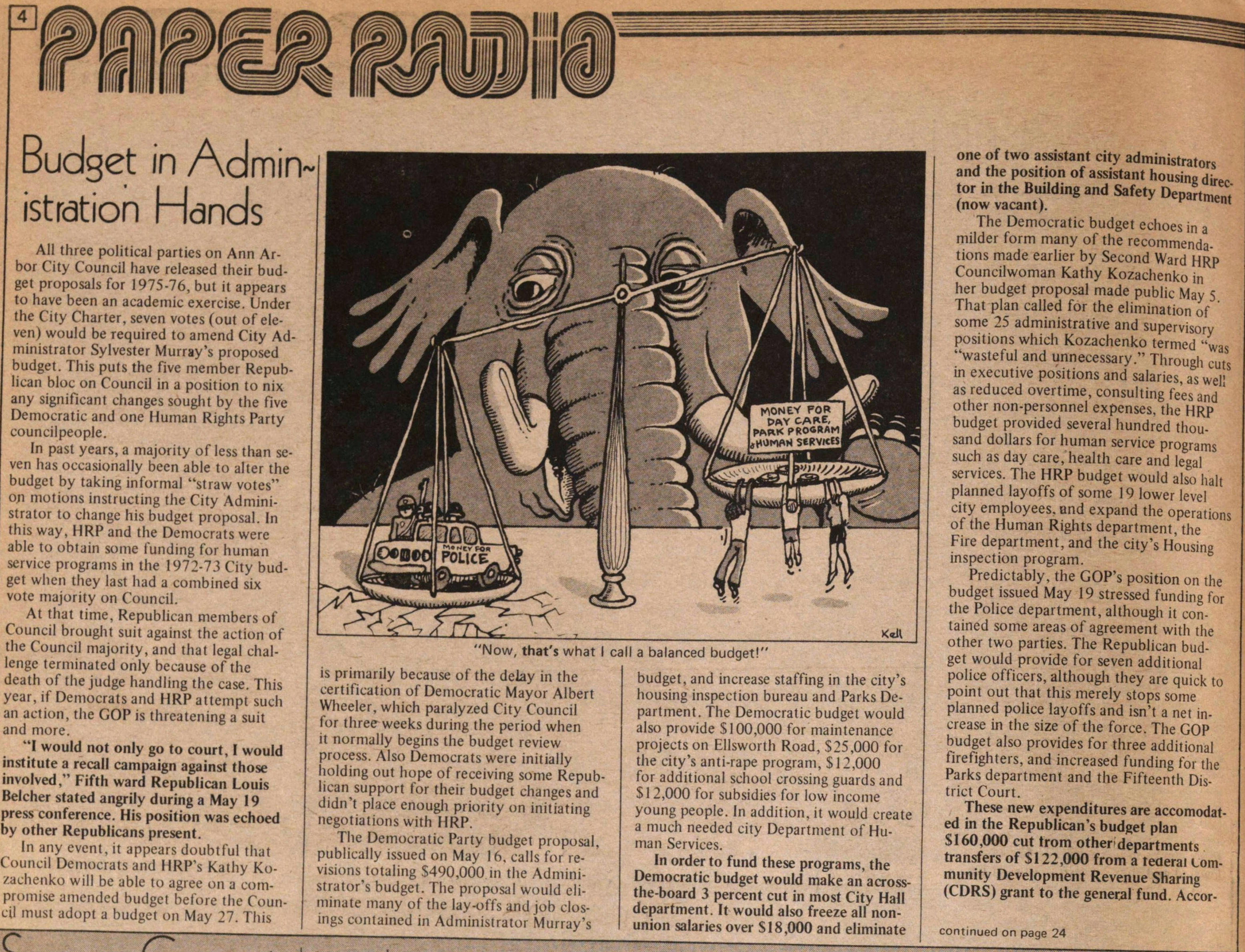 All three politica! parties on Ann Arbor City Council have released their budget proposals for 1975-76, but it appears to have been an academie exercise. Under the City Charter, seven votes (out of eleven) would be required to amend City Administrator Sylvester Murray's proposed budget. This puts the five member Republican bloc on Council in a position to nix any significant changes souglu by the five Democratie and one Human Rights Party councilpeople. In past years, a majority of less than seven has occasionally been able to alter the budget by taking informal "straw votes" oji motions instructing the City Administrator to change his budget proposal. In this way, HRP and the Democrats were able to obtain some funding for human service programs in the 1972-73 City budget when they last had a combined six vote majority on Council. At that time, Republican membersof Council brouglit suit against the action of the Council majority, and that legal challenge terminated only because of the death of the judge handling the case. This year, if Democrats and HRP attempt such an action, the GOP is thrcatcning a suit and more. "I would not only go to court, I would institute a recall campaign against those involved," Fifth ward Republican Louis Belcher stated angrily during a May 19 press conference. His position was echoed by other Republicans present. In any event, it appears doubtful that Council Democrats and HRP's Kathy Kozachenka will be able to agree on a compromise amended budget before the Council must adop! a budget on May 27. This - - ■ - is priniarily because of the deJay in the certification of Democratie Mayor Albert Wheeler, which paralyzed City Council tor three weeks during the period when it normally begins the budget review process. Also Democrats were initially holding out hope of receiving some Republican support for their budget clianges and didn't place enougii piiority on initiating negotiations with HRP. The Democratie Party budget proposal. publieally issued on May 16. calis for revisions totaling S490,000 in the Administrator's budget. Tlie proposal would elimínate many of the lay-offs and job closings contained in Adminlstrator Murray's budget, and increase staffing in the city's housing inspection bureau and Parks Department. The Democratie budget would also provide SI 00,000 for maintenance projects on Ellsworth Road, S25,OOO for the city's anti-rape program, 512,000 for additional school crossing guards and 51 2,000 for subsidies for low income young people. In addition. it would créate a much needed city Department of Human Services. In order to fund these programs, the Democratie budget would make an acrossthe-board 3 percent cut n most City Hall department. It would also freeze all nonunion salaries over SI 8, 000 and elimínate one of two assistant city administraos and the position of assistant housine dir tor in the Building and Safety Department' (now vacant). " The Democratie budget echoes in a milder form many of the recommendations made earlier by Second Ward HRP Councilwoman Kathy Kozachenko in her budget proposal made public May 5 That plan called for the elimination of ' some 25 administrative and superviso positions which Kozachenko termed "was "wasteful and unnecessary." Througli cuts in executive positions and salaries, as wel! as reduced overtime, consulting fe'es and ' other non-personnel expenses, the HRP budget provided several hundred thousand dollars for human service programs such as day care, healtli care and legal services. The HRP budget would also halt planned layoffs of some 19 lower level city employees, and expand the operations of the Human Rights department, the Fire department, and the city's Housing inspection program. Predictably, the GOP's position on the budget issued May 19 stressed funding for the Pólice department, althougli it contained some areas of agreement with the other two parties. The Republican budget would provide for seven additional pólice officers, althougli they are quick to point out that this merely stops some planned pólice layoffs and isn't a net increase in the size of the force. The GOP budget also provides for three additional firefighters, and increased funding for the Parks department and the Fifteenth District Court. These new expenditures are accomodated in the Republican's budget plan SI 60 ,000 cut trom other department. s transfers of SI 22,000 from a teaerai community Development Revenue Sharing (CDRS) grant to the general fund. Accorcontinued on page 24 P'J3Vr KaHlO continued from dpCl IXaUlU page 4 ding to guidelines esiablished by Congress, CDRS funds are intended to serve the needs of low and moderate income pople, and there is a serious question as to whether the GOP's proposal would be a permissable use of the grant. Although no party is expected to gather the necessary votes to pass its budget amendment proposal, some of the features of the three parties' recommendations may find their way into the final budget. City Administrator Murray has stated his intention to review the three plans and consult with his department heads about possibly implementing some of the proposed changes. "I will not accept in toto the changes proposed by any one of the parties," he cautioned. One major lesson which should be learned from this year's budget-making process is that the structure of City Hall, the provisions of the City Charter and the timing of the budget adoption all combine to give the newly elected City Council only limitedvoice'in setting spending priorities. In the absence of Council input into the writing of the City's budget (or a seven vote majority) the appointed Administrator has a virtual free hand in establishing city financial poücy. 'Candidates for local office can present proposals for changing spending priorities, but once elected they will face great difficulties in bringing them about, even with the support of a majority of their colleagues.