The Spectrum Runs From Me To 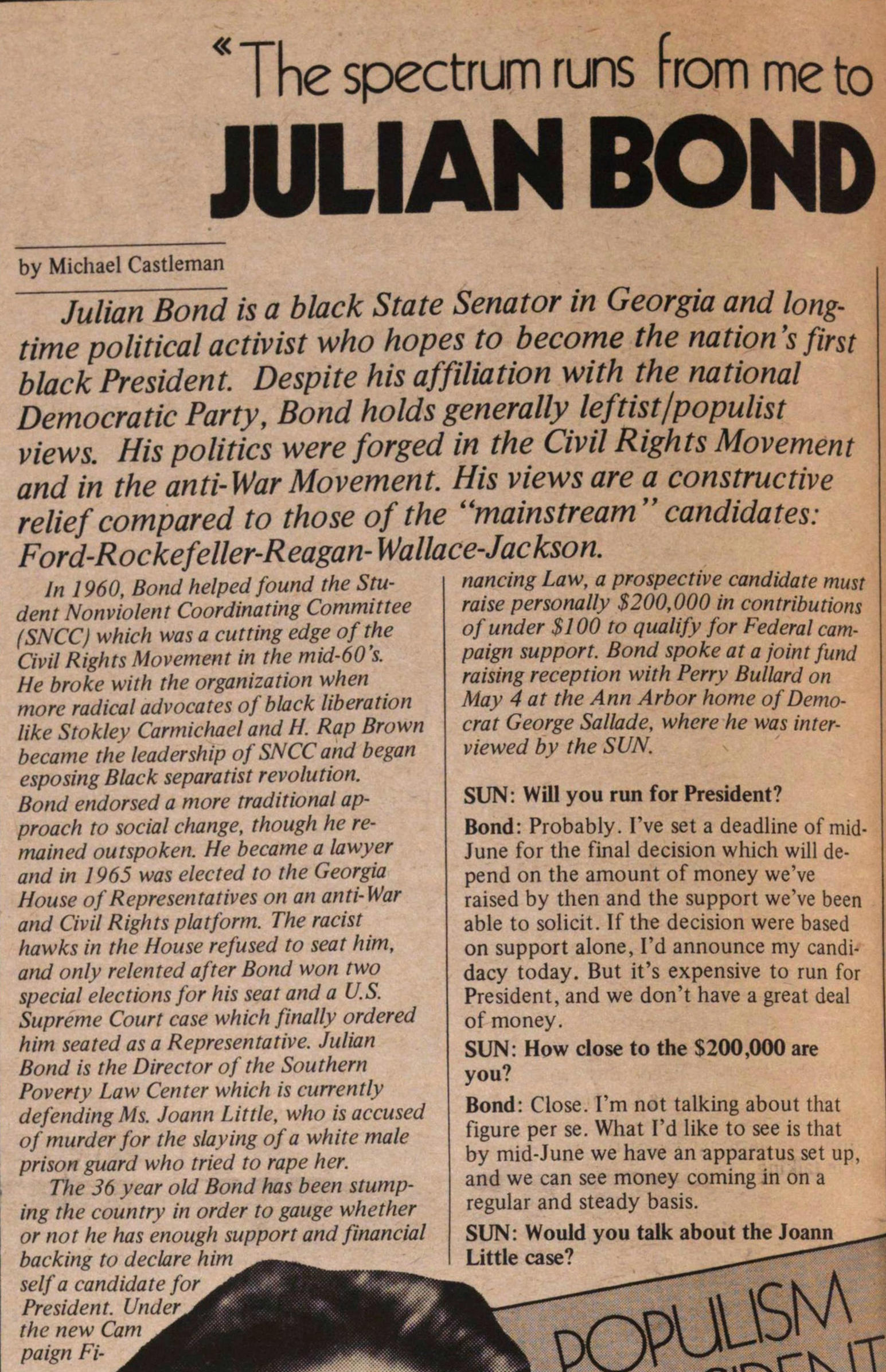 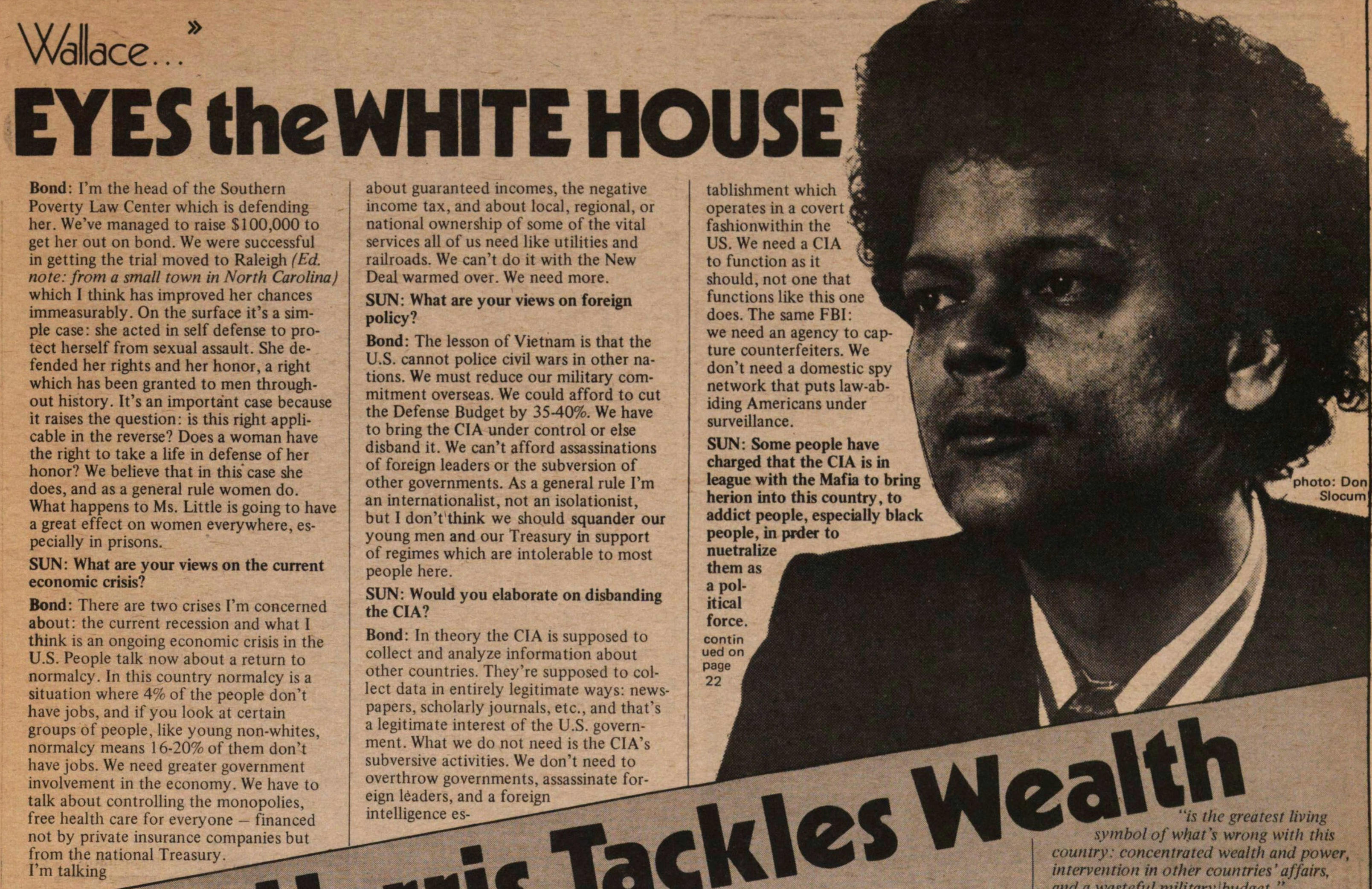 Julián Bond is a black State Senator in Georgia and longtime political activist who hopes to become the nation 's first black President. Despite his affiliation with the national Democratie Party, Bond holds generally lef tist populist views. His politics were forged in the Civil Rights Movement and in the anti-War Movement. His views are a constructive relief compared to those of the "mainstream" candidates: Ford-Rockefeller-Reagan-Wallace-Jackson. In 1960, Bond helpedfound the Student Nonviolent Coordinating Committee (SNCC) which was a cutting edge of the Civil Rights Movement in the mid-60's. He broke with the organization when more radical advocates of black liberation like Stoklev Carmichael and H. Rap Brown became the leadership of SNCC and began esposing Black separatist revolution. Bond endorsed a more traditional approach to social change, though he remained outspoken. He became a lawyer and in 1965 was elected to the Georgia House of Representatives on an anti-War and Civil Rights platform. The racist hawks in the House refused to seat him, and only reien ted af ter Bond won two special elections for his seat and a U.S. Supreme Court case which finally ordered him seated as a Representative. Julián Bond is the Director of the Southern Poverty Law Center which is currently defending Ms. Joann Little, who is accused of murder for the slaying of a white male prison guard who tried to rape her. The 36 year old Bond has been stumping the country in order to gauge whether or not he has enough support and financial backing to declare him sel f a candida te for k President. Under the new Cam4 A nanang Law, a prospecnve candidate must raise personally $200,000 in contributions ofunder $100 to qualify for Federal campaign support. Bond spoke at a joint fund raising reception with Perry Bullard on May 4 at the Ann Arbor home ofDemocrat George Sallade, where he was interviewed by the SUN. SUN: Will you run for President? Bond: Probably. I've set a deadline of midJune for the final decisión which will depend on the amount of money we've raised by then and the support we've been able to solicit. If the decisión were based on support alone, I'd announce my candidacy today. But it's expensive to run for President, and we don't have a great deal of money. SUN: How close to the $200,000 are you? Bond: Close. I'm not talking about that figure per se. What I'd like to see is that by mid-June we have an apparatus set up, and we can see money coming in on a regular and steady basis. SUN: Would you talk about the Joann Little case? Bond: I'm the head of the Southern Poverty Law Center which is defending her. We've managed to raise $100,000 to get her out on bond. We were successful in getting the trial moved to Raleigh (Ed. note: from a small town in North Carolina) which I think has improved her chances immeasurably. On the surface it's a simple case: she acted in self defense to protect herself from sexual assault. She defended her rights and her honor, a right which has been granted to men throughout history. It's an important case because it raises the question: is this right applicable in the reverse? Does a woman have the right to take a life in defense of her honor? We believe that in this" case she does, and as a general rule women do. What happens to Ms. Little is going to have a great effect on women everywhere, especially in prisons. SUN: What are your views on the current economie crisis? Bond: There are two crises I'm concerned about: the current recession and what 1 think is an ongoing economie crisis in the U.S. People talk now about a return to normalcy. In this country normaley is a situation where 4% of the people don't have jobs, and if you look at certain groups of people, like young non-whites, normalcy means 1 6-20% of them don't have jobs. We need greater government involvement in the economy. We have to talk about controlling the monopolies, free health care for everyone - financed not by private insurance companies but from the national Treasury. - - "" I m talking about guaranteed incomes, the negative income tax, and about loca), regional, or national ownership of some of the vital services all of us need like Utilities and railroads. We can't do it with the New Deal warmed over. We need more. SUN: What are your views on foreign policy? Bond: The lesson of Vietnam is that the U.S. cannot pólice civil wars in other nations. We must reduce our military commitment overseas. We could afford to cut the Defense Budget by 35-40%. We have to bring the CIA under control or else disband it. We can't afford assassinations of foreign leaders or the subversión of other governments. As a general rule I'm an internationalist, not an isolationist, but I don't'think we should squander our young men and our Treasury in support of regimes which are intolerable to most people here. SUN: Would you elabórate on disband ing the CIA? Bond: In theory the CIA is supposed to collect and analyze information about other countries. They're supposed to collect data in entirely legitímate ways: newspapers, scholarly journals, etc, and that's a legitímate interest of the U.S. government. What we do not need is the CIA's subversive activities. We don't need to overthrow governments, assassinate eign leaders, and a foreign intelligence es- - ' tablishment which ] operates in a covert i fashionwithin the " US. We need a CIA to function as it should, not one that fl functions like this one J does. The same FBI: we need an agency to capture counterfeiters. We don't need a domestic spy network that puts law-abiding Americans under surveillance. SUN : Some people have charged that the CIA is in league with the Mafia to bring herion int o this country, to addict people, especially black people, in prder to . nuetralíze them as apolitical forcé, i contin ued on page i 22 M