The Mayaguez: Rescue Or Retaliation? 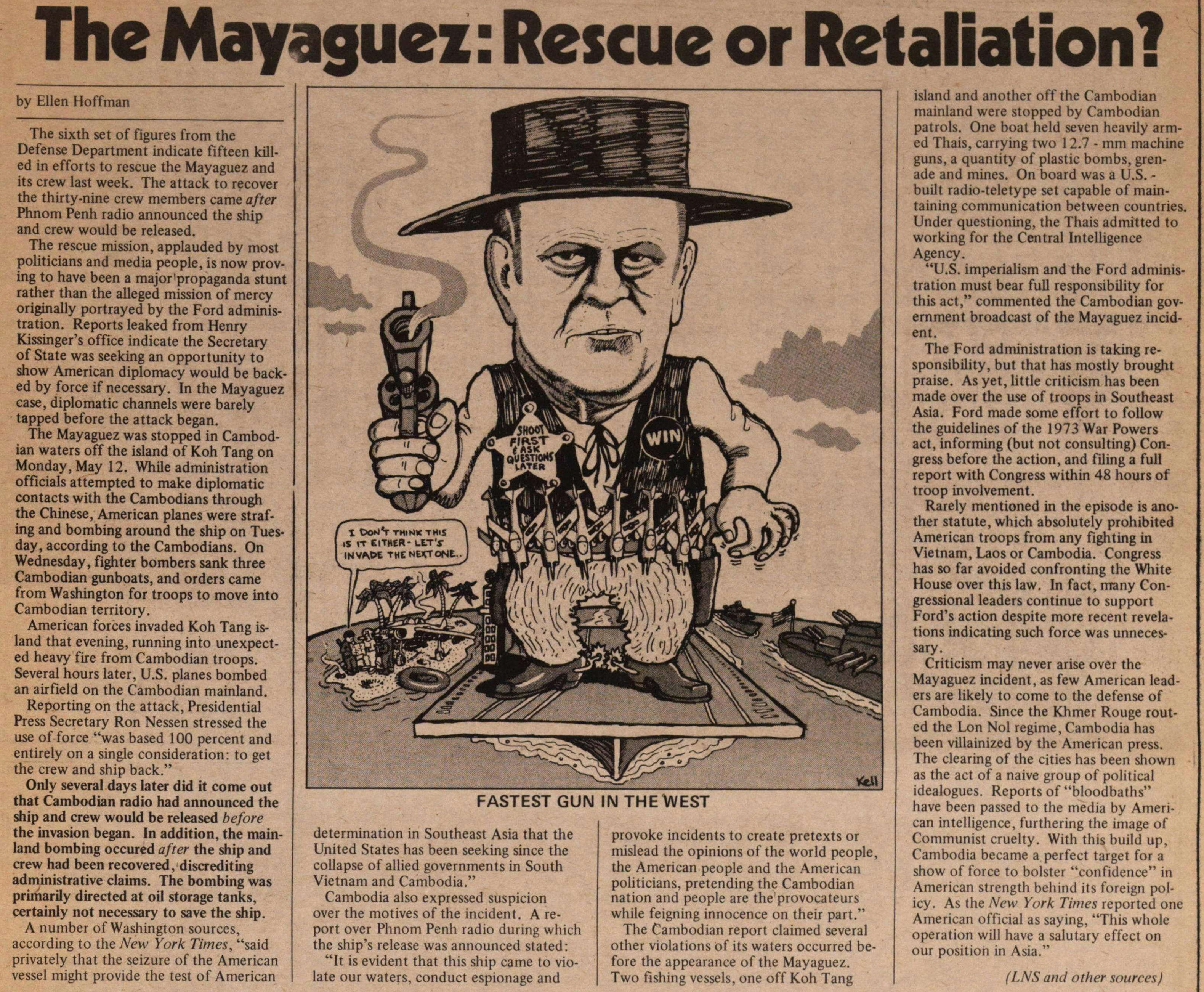 The sixth set of figures from the Defense Department indícate fifteen killed in efforts to rescue the Mayaguez and its crew last week. The attack to recover the thirty-nine crew members came after Phnom Penh radio announced the ship and crew would be released. The rescue mission, applauded by most politicians and media people, is now proving to have been a major'propaganda stunt rather than the alleged mission of mercy originally portrayed by the Ford administration. Reports leaked from Henry Kissinger's office indícate the Secretary of State was seeking an opportunity to show American diplomacy would be backed by force if necessary. In the Mayaguez case, diplomatic channels were barely tapped before the attack began. The Mayaguez was stopped in Cambodian waters off the island of Koh Tang on Monday.May 12. While administration officials attempted to make diplomatic contacts with the Cambodians through the Chinese, American planes were strafing and bombing around the ship on Tuesday, according to the Cambodians. On Wednesday, fighter bombers sank three Cambodian gunboats, and orders came from Washington for troops to move into Cambodian territory. American forces invaded Koh Tang island that evening, running into unexpected heavy fire from Cambodian troops. Several hours later, U.S. planes bombed an airfield on the Cambodian mainland. Reporting on the attack, Presidential Press Secretary Ron Nessen stressed the use of force "was based 100 percent and entirely on a single consideration: to get the crew and ship back." Only several days later did it come out that Cambodian radio had announced the ship and crew would be released before the invasión began. In addition, the mainland bombing occured after the ship and crew had been recovered, discrediting administrative claims. The bombing was primarily directed at oil storage tanks, certainly not necessary to save the ship. A number of Washington sources, according to the New York Times, "said privately that the seizure of the American vessel might provide the test of American determination in Southeast Asia that the United States has been seeking since the collapse of allied governments in South Vietnam and Cambodia." Cambodia also expressed suspicion over the motives of the incident. A report over Phnom Penh radio during wliich the ship's release was announced stated: "It is evident that this ship carne to viólate our waters, conduct espionage and provoke incidents to créate pretexts or mislead the opinions of the world people, the American people and the American politicians, pretending the Cambodian nation and people are the provocateurs while feigning innocence on their part." The Cambodian report claimed several other violations of its waters occurred before the appearance of the Mayaguez. Two fishing vessels, one off Koh Tang island and another off the Cambodian mainiand were stopped by Cambodian patrols. One boat held seven heavily armed Thais, carrying two 1 2.7 - mm machine guns, a quantity of plastic bombs, grenade and mines. On board was a U.S. - built radio-teletype set capable of maintaining communication between countries. Under questioning, the Thais admitted to working for the Central Intelligence Agency. "U.S. imperialism and the Ford administration must bear full responsibility for this act," commented the Cambodian government broadcast of the Mayaguez incident. The Ford administration is taking responsibility, but that has mostly brought praise. As yet, little criticism has been made over the use of troops in Southeast Asia. Ford made some effort to follow the guidelines of the 1973 War Powers act, informing (but not consulting) Congress before the action, and filing a full report with Congress within 48 hours of troop involvement. Rarely mentioned in the episode is another statute, which absolutely prohibited American troops from any fighting in Vietnam, Laos or Cambodia. Congress has so far avoided confronting the White House over this law. In fact.many Congressional leaders continue to support Ford's action despite more recent revelations indicating such force was unnecessary. Criticism may never arise over the Mayaguez incident, as few American leaders are likely to come to the defense of Cambodia. Since the Khmer Rouge routed the Lon Nol regime, Cambodia has been villainized by the American press. The clearing of the cities has been shown as the act of a naive group of political idealogues. Reports of "bloodbaths" have been passed to the media by American intelligence, furthering the image of Communist cruelty. With this build up, Cambodia became a perfect target for a show of force to bolster "confidence" in American strength behind its foreign policy. As the New York Times reported one American official as saying, "This whole operation will have a salutary effect on our position in Asia." (LNS and other sources)