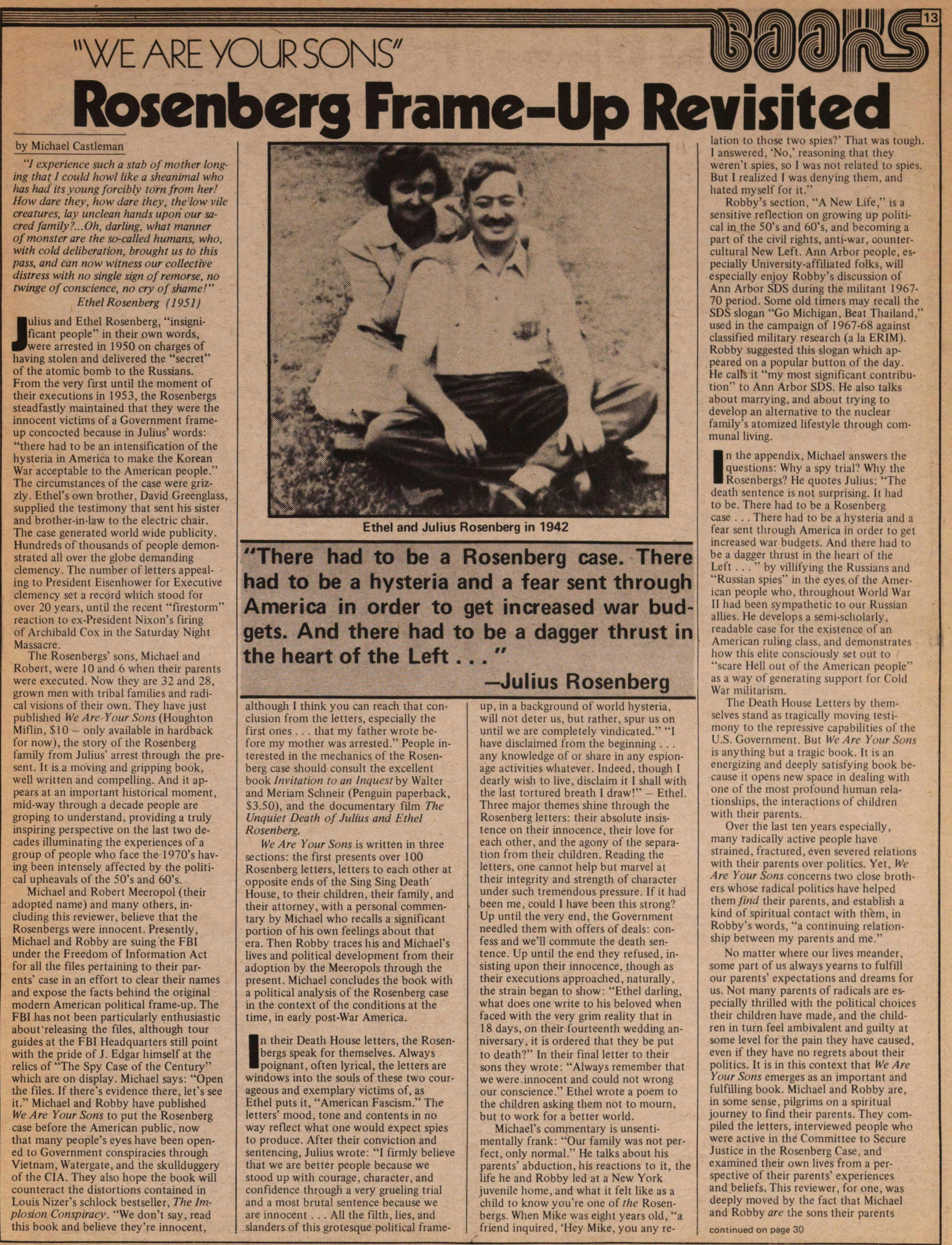 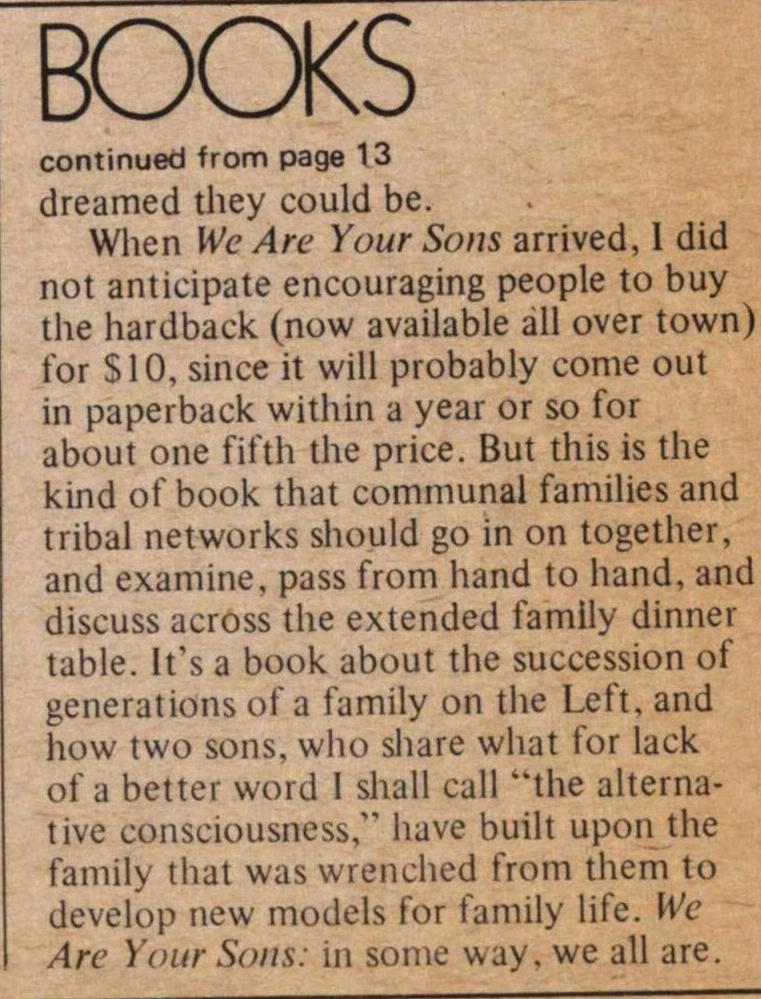 WE ARE YOUR SONS

"I experience such a stab of mother longing that( I could how l like a sheanimal who has had its young forcibly torn from her! How dare they, how dare they, the low vile creatures, lay unclean hands uponour sacred family?...Oh, darling, what manner of monster are the so-called humans, who, with cold deliberation, brought us to this pass, and can now witness our collective distress with no single sign of remorse, no twinge of conscience, no cry of shame!" Ethel Rosenberg (1951)

Julius and Ethel Rosenberg, "insignificant people" in their own words, were arrested in 1950 on charges of having stolen and delivered the "secret" of the atomic bomb to the Russians. From the very first until the moment of their executions in 1953, the Rosenbergs steadfastly maintained that they were the innocent victims of a Government frameup concocted because in Julius' words: "there had to be an intensification of the hysteria in America to make the Korean War acceptable to the American people." The circumstances of the case were grizzly. Ethel's own brother, David Greenglass, supplied the testimony that sent his sister and brother-in-law to the electric chair. The case generated world wide publicity. Hundreds of thousands of people demonstrated all over the globe demanding clemency. The number of letters appealing to President Eisenhower for Executive clemency set a record which stood for over 20 years, until the recent "firestorm" reaction to ex-President Nixon's firing of Archibald Cox in the Saturday Night Massacre.

The Rosenbergs' sons, Michael and Robert, were 10 and 6 when their parents were executed. Now they are 32 and 28, grown men with tribal families and radical visions of their own. They have just published We Are Your Sons (Houghton Miflin, $10 - only available in hardback for now), the story of the Rosenberg family from Julius' arrest through the present. It is a moving and gripping book, well written and compelling. And it appears at an important historical moment, mid-way through a decade people are groping to understand, providing a truly inspiring perspective on the last two decades illuminating the experiences of a group of people who face the 1970's having been intensely affected by the political upheavals of the 50's and 60's.

Michael and Robert Meeropol (their adopted name) and many others, including this reviewer, believe that the Rosenbergs were innocent. Presently, Michael and Robby are suing the FBI under the Freedom of Information Act for all the files pertaining to their parents' case in an effort to clear their names and expose the facts behind the original modern American political frame-up. The FBI has not been particularly enthusiastic about 'releasing the files, although tour guides at the FBI Headquarters still point with the pride of J. Edgar himself at the relies of "The Spy Case of the Century" which are on display. Michael says: "Open the files. If there's evidence there, let's see it." Michael and Robby have published We Are Your Sons to put the Rosenberg case before the American public, now that many people's eyes have been opened to Government conspiracies through Vietnam, Watergate, and the skullduggery of the CIA. They also hope the book will counteract the distortions contained in Louis Nizer's schlock bestseller, The Implosion Conspiracy. "We don't say, read this book and believe they're innocent, although I think you can reach that conclusion from the letters, especially the first ones...that my father wrote before my mother was arrested." People interested in the meclianics of the Rosenberg case should consult the excellent book Imitation to an Inquest by Walter and Meriam Schneir (Penguin paperback, $3.50), and the documentary film The Unquiet Death of Julius and Ethel Rosenberg.

We Are Your Sons is written in three sections: the first presents over 100 Rosenberg letters, letters to each other at opposite ends of the Sing Sing Death' House, to their children, their family, and their attorney, with a personal commentary by Michael who recalls a significant portion of his own feelings about that era. Then Robby traces his and Michael's lives and political development from their adoption by the Meeropols through the present. Michael concludes the book with a political analysis of the Rosenberg case in the context of the conditions at the time, in early post-War America.

In their Death House letters, the Rosenbergs speak for themselves. Always poignant, often lyrical, the letters are windows into the souls of these two courageous and exemplary victims of, as Ethel puts it, "American Fascism." The letters' mood, tone and contents in no way reflect what one would expect spies to produce. After their conviction and sentencing, Julius wrote: "I firmly believe that we are better people because we stood up with courage, character, and confidence through a very grueling trial and a most brutal sentence because we are innocent...All the filth, lies, and slanders of this grotesque political up, in a background of world hysteria, will not deter us, but rather, spur us on until we are completely vindicated." "I have disclaimed from the beginning....any knowledge of or share in any espionage activities whatever. Indeed, though I dearly wisli to live, disclaim it I shall with the last tortured breath I draw!" - Ethel. Three major themes shine through the Rosenberg letters: their absolute insistence on their innocence, their love for each other, and the agony of the separation from their children. Reading the letters, one cannot help but marvel at their integrity and strength of character under such tremendous pressure. If it had been me, could I have been this strong? Up until the very end, the Government needled them with offers of deals: confess and we'll commute the death sentence. Up until the end they refused, insisting upon their innocence, though as their executions approached, naturally, the strain began to show: "Ethel darling, what does one write to his beloved when faced with the very grim reality that in 18 days, on their fourteenth wedding anniversary, it is ordered that they be put to death?" In their final letter to their sons they wrote: "Always remember that we were. innocent and could not wrong our conscience." Ethel wrote a poem to the children asking them not to mourn, but to work for a better world.

Michael's commentary is unsentimentally frank: "Our family was not perfect, only normal." He talks about his parents' abduction, his reactions to it, the life he and Robby led at a New York juvenile home, and what it felt like as a child to know you're one of the Rosenbergs. When Mike was eight years old, "a friend inquired, 'Hey Mike, you any relation to those two spies? that was tough. I answered, 'No,' reasoning that they weren't spies, so I was not related to spies. But I realized I was denying them, and hated myself for it."

Robby's section, "A New Life," is a sensitive reflection on growing up political in the 50's and 60's, and becoming a part of the civil rights, anti-war, countercultural New Left. Ann Arbor people, especially University-affiliated folks, will especially enjoy Robby's discussion of Ann Arbor SDS during the militant 196770 period. Some old timers may recall the SDS slogan "Go Michigan, Beat Thailand," used in the campaign of 1967-68 against classified military research (a la ERIM). Robby suggested this slogan which appeared on a popular button of the day. He calls it "my most significant contribution" to Ann Arbor SDS. He also talks about marrying, and about trying to develop an alternative to the nuclear family's atomized lifestyle througli communal living.

In the appendix, Michael answers the questions: Why a spy trial? Why the Rosenbergs? He quotes Julius: "The death sentence is not surprising. It had to be. There had to be a Rosenberg case...There had to be a hysteria and a fear sent through America in order to get increased war budgets. And there had to be a dagger thrust in the heart of the Left..." by villifying the Russians and "Russian spies" in the eyes of the American people who, throughout World War II had been sympathetic to our Russian allies. He develops a semi-scholarly. readable case for the existence oï an American ruling class. and demonstrates how this elite consciously set out to "scare Heil out of the American people" as a way of generating support for Cold War militarism.

The Death House Letters by themselves stand as tragically moving testimony to the repressive capabilities of the U.S. Government. But We Are Your Sons is anything but a tragic book. It is an energizing and deeply satisfying book because it opens new space in dealing with one of the most profound human relationships, the interactions of children with their parents.

Over the last ten years especially, many radically active people have strained, fractured, even severed relations with their parents over politics. Yet, We Are Your Sons concerns two close brothers whose radical politics have helped them find their parents, and establish a kind of spiritual contact with them, in Robby's words, "a continuing relationship between my parents and me."

No matter where our lives meander, some part of us always yearns to fulfill our parents' expectations and dreams for us. Not many parents of radicals are especially thrilled with the political choices their children have made, and the children in turn feel ambivalent and guilty at some level for the pain they have caused, even if they have no regrets about their politics. It is in this context that We Are Your Sons emerges as an important and fulfilling book. Michael and Robby are, in some sense, pilgrims on a spiritual journey to find their parents. They compiled the letters, interviewed people who were active in the Committee to Secure Justice in the Rosenberg Case, and examined their own lives from a perspective of their parents' experiences and beliefs. This reviewer, for one, was deeply moved by the fact that Michael and Robby are the sons their parents

dreamed they could be.

When We Are Your Sons arrived, I did not anticipate encouraging people to buy the hardback (now available all over town) for $10, since it will probably come out in paperback within a year or so for about one fifth the price. But this is the kind of book that communal families and tribal networks should go in on together, and examine, pass from hand to hand, and discuss across the extended family dinner table. It's a book about the succession of generations of a family on the Left, and how two sons, who share what for lack of a better word I shall call "the alternative consciousness," have built upon the family that was wrenched from them to develop new models for family life. We Are Your Sons: in some way, we all are.