From Nakedness To Social Activist: Festival of International Theatre in AA 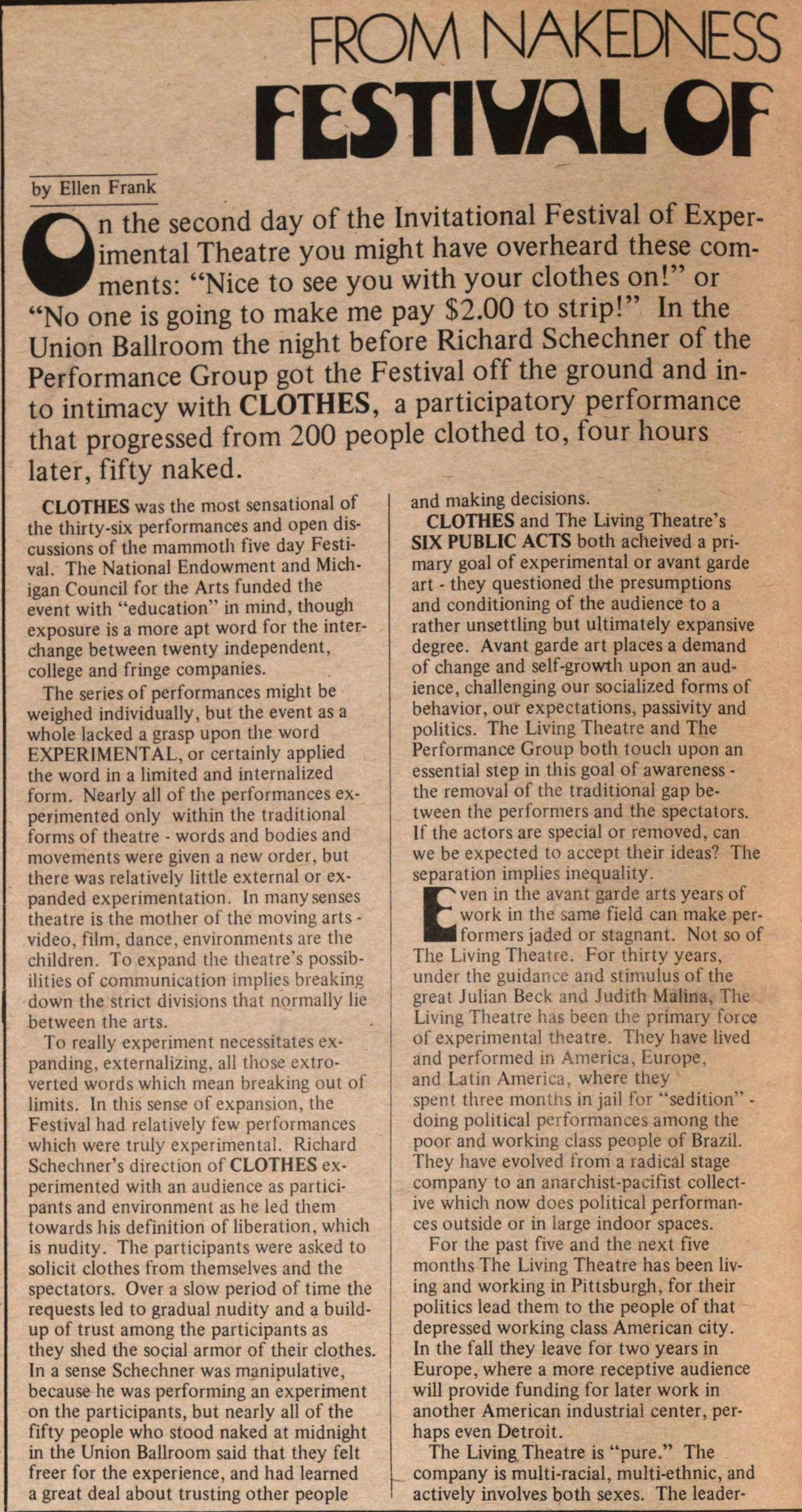 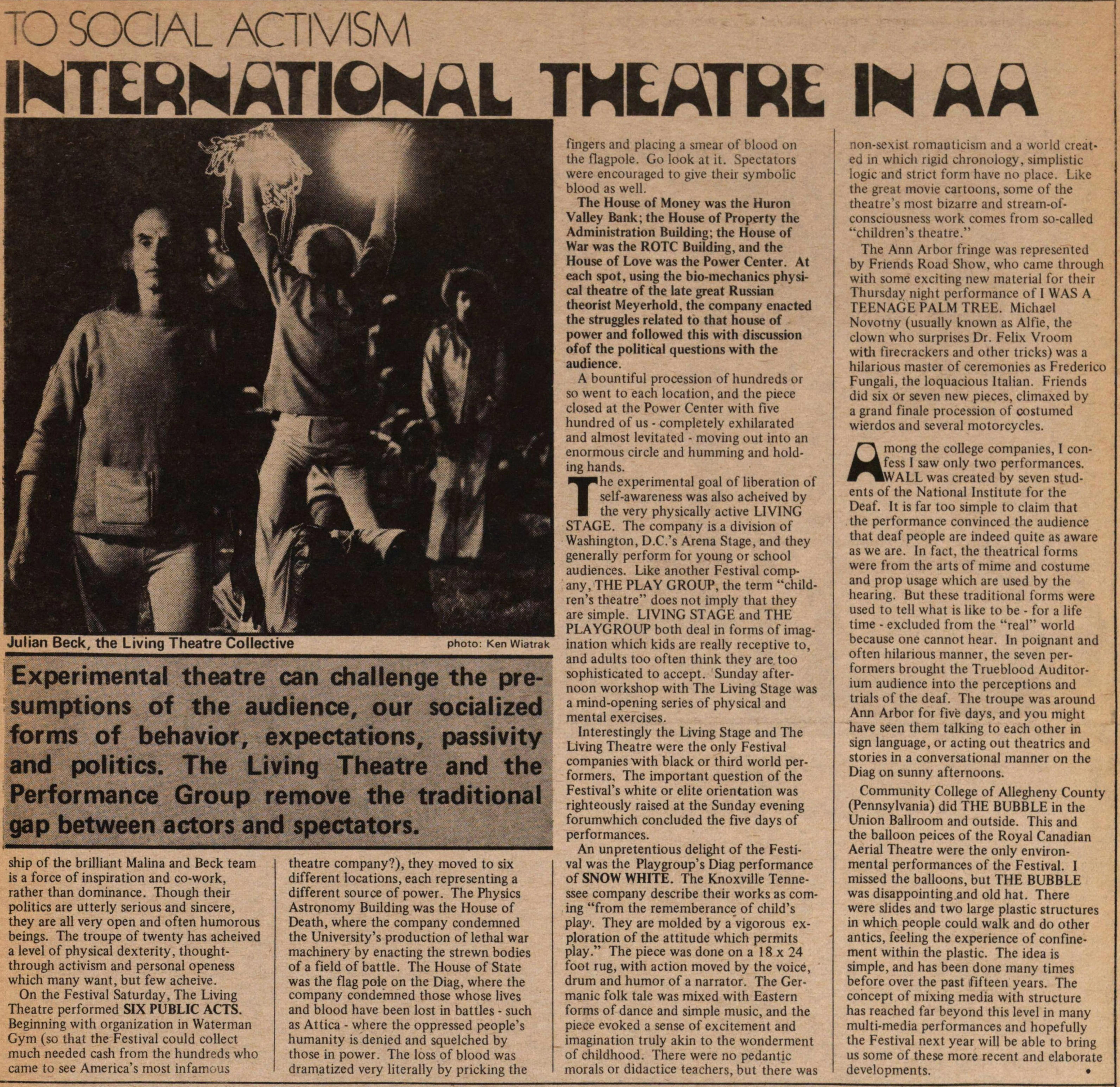 On the second day of the International Festival of Experimental Theatre you might have overheard these comments: "Nice to see you with your clothes on!" or "No one is going to make me pay $2.00 to strip!" In the Union Ballroom, the night before Richard Schechner of the Performance Group got the Festival off the ground and into intimacy with "Clothes," a participatory performance that progressed from 200 people clothes to, four hours later, fifty naked.

"Clothes" was the most sensational of the thirty-six performances and open discussion of the mammoth five-day Festival. The National Endowment and Michigan Council for the Arts funded the event with "education" in mind, though exposure is a more apt word for the interchange between twenty independent, college, and fringe companies.

The series of performances might be weighed individually, but the event as a whole lacked a grasp upon the word EXPERIMENTAL, or certainly applied the word in a limited an internalized context. Nearly all of the performances experimented only within the traditional forms of theatre, words and bodies and movements were given a new order, but there was relatively little external or expanded experimentation. In many senses theatre is the mother of the moving arts - video, film, dance, environmentally are the children. to expand the theatre's possibilities of communication implies breaking down the strict divisions that normally lie between the arts.

To really experiment necessitates expanding, externalizing, all those extroverted words which mean breaking out of limits. In this sense of expansion, the Festival had relatively few performances which were truly experimental. Richard Schechner's direction of "Clothes" experimented with an audience as participants and environment as he led them towards his definition of liberation, which is nudity. The participants were asked to solicit clothes from themselves and the spectators. Over a slow period of time the requests led to gradual nudity and a build-up of trust among the participants as they shed the social armor of their clothes. In a sense, Schechner was manipulative because we was performing an experiment on the participants, but nearly all of the fifty people who stood naked at midnight in the Union Ballroom said that they felt freer for the experience, and had learned a great deal about trusting other people and making decisions.

"Clothes" and The Living Theatre's "Six Public Acts" both achieved a primary goal of experimental or avant-garde art -- they questioned the presumptions and conditioning of the audience to a rather unsettling but ultimately expansive degree. Avant-garde art places a demand of change and self-growth upon an audience, challenging our socialized forms of behavior, our expectations, passivity, and politics. The Living Theatre and The Performance Group both touch upon an essential step in this goal of awareness - the removal of the traditional gap between the performers and the spectators. If the actors are special or removed, can we be expected to accept their ideas? The separation implies inequality.

Even in the avant-garde arts year of work in the same field can make performers jaded or stagnant. Not so of The Living Theatre. For thirty years, under the guidance and stimulus of the great Julian Beck and Judith Malina, The Living Theatre has been the primary force of experimental theatre. They have lived and performed in America, Europe, and Latin America, where they spent three months in jail for "sedition" doing political performances among the poor and working-class people of Brazil. They have evolved from a radical stage company to an anarchist-pacifist collective which now does political performances outside or in large indoor spaces.

For the past five and the next five months, The Living Theatre has been living and working in Pittsburgh, for their politics lead them to the people of that depressed working-class American city. In the fall, they leave for two years in Europe, where a more receptive audience will provide funding for later work in another American industrial center, perhaps even Detroit.

The Living Theatre is "pure." The company is multi-racial, multi-ethnic, and actively involves both sexes. The leadership of the brilliant Malina and Beck team is a force of inspiration and co-work, rather than dominance. Though their politics are utterly serious and sincere, they are all very open and often humorous beings. The troupe of twenty has achieved a level of physical dexterity, thought-through activism, and personal openness which many want, but few achieve.

On the Festival Saturday, The Living Theatre performed "Six Public Acts." Beginning with organizing in Waterman Gym (so that the Festival could collect much-needed cash from the hundreds who came to see America's most infamous theatre company?), they moved to six different locations, each representing a different source of power. The Physics Astronomy Building was the House of Death, where the company condemned the University's production of lethal war machinery by enacting the strewn bodies of a field of battle. The House of State was the flag pole on the Diag, where the company condemned those who lives and blood have been lost in battles -- such as Attica -- where the oppressed people's humanity is denied and squelched by those in power. The loss of blood was dramatized very literally by pricking the fingers and placing a smear of blood on the flagpole. Go look at it. Spectators were encouraged to give their symbolic blood as well.

The House of Money was the Huran Valley Bank; the House of Property the Administration Building; the House of War was the ROTC Building, and the House of Love was the Power Center. At each spot, using the bio-mechanics physical theatre of the late great Russian theorist Meyerhold, the company enacted the struggles related to that house of power and followed with this discussion of the political questions with the audience.

A bountiful procession of hundreds or so went to each location, and the piece closed at the Power Center with five hundred of us - completely exhilarated and almost levitated - moving out into an enormous circle and humming and holding hands.

The experimental goal of liberation of self-awareness was also achieved by the very physically active Living Stage. The company is a division of Washington, D.C.'s Arena Stage, and they generally perform for young or school audiences. Like other Festival company "The Play Group", the term "children's theatre" does not imply that they are simple. Living Stage and The Play Group both deal in forms of imagination which kids are really receptive to, and adults too often think they're too sophisticated to accept. Sunday afternoon workshop with The Living Stage was a mind-opening series of physical and mental exercises.

Interestingly, the Living Stage and the Living Theatre were the only Festival companies with black or third world performers. The important question of the Festival's white or elite orientation was righteously raised at the Sunday evening forum which concluded five days of performances.

An unpretentious delight of the Festival was the Plyground's Diag performance of Snow White. The Knoxville, Tennessee company describes their work as coming "from the remembrance of child's play. They are molded by a vigorous exploration of the attitude which permits play." The piece was done on an 18x24 foot rug, with action moved by voice, drum, and humor of a narrator. The Germanic folk tale was mixed with Eastern forms of dance and simple music, and the piece evoked a sense of excitement and imagination truly aking to the wonderment of childhood. There were no pedantic morals or didactic teachers, but there was non-sexist romanticism and a world created in which rigid chronology, simplistic logic, and strict form have no place. Like the great movie cartoons, some of the theatre's most bizarre and stream-of-consciousness work comes from so-called "children's theatre."

The Ann Arbor fringe was represented by Friends Road Show, who came through with some exciting new material for their Thursday night performance of "I Was A Teenage Palm Tree." Michael Novotny (usually known as Alfie, the clown who surprises Dr. Felix Vroom with firecrackers and other tricks) was a hilarious master of ceremonies as Frederico Fungali, the loquacious Italian. Friends did six or seven new pieces, climaxed by a grand finale procession of costumed weirdos and several motorcycles.

Among the college companies, I confess I saw only two performances. WALL was created by seven students of the National Institute for the Deaf. It is far too simple to claim that the performance convinced the audience that deaf people are indeed quite as aware as we are. In fact, the theatrical forms were from the arts of mime and costume and prop usage which are used by the hearing. But these traditional forms were used to tell what it's like to be - for a lifetime - excluded from the "real" world because one cannot hear. In poignant and often hilarious manner, the seven performers brought the Trueblood Auditorium into the perceptions and trials of the deaf. The troupe was around Ann Arbor for five days and you might have seen them talking to each other in sign language, or acting out theatrics and stories in conversational manner on the Diag on sunny afternoons.

community College of Allegheny County (Pennsylvania) did "The Bubble" in the Union Ballroom and outside. This and the balloon pieces of the Royal Canadian Aerial Theatre were the only environmental performances of the Festival. I missed the balloons, but "The Bubble" was disappointing and old hat. There were slides and two large plastic structures in which people could walk and do other antics, feeling the experience of confinement within the plastic. The idea is simple, and has been done many times before over the past fifteen years. The concept of mixing media with structure has reached far beyond this level in many multi-media performances and hopefully the Festival next year will be able to bring us some of these more recent and elaborate developments.