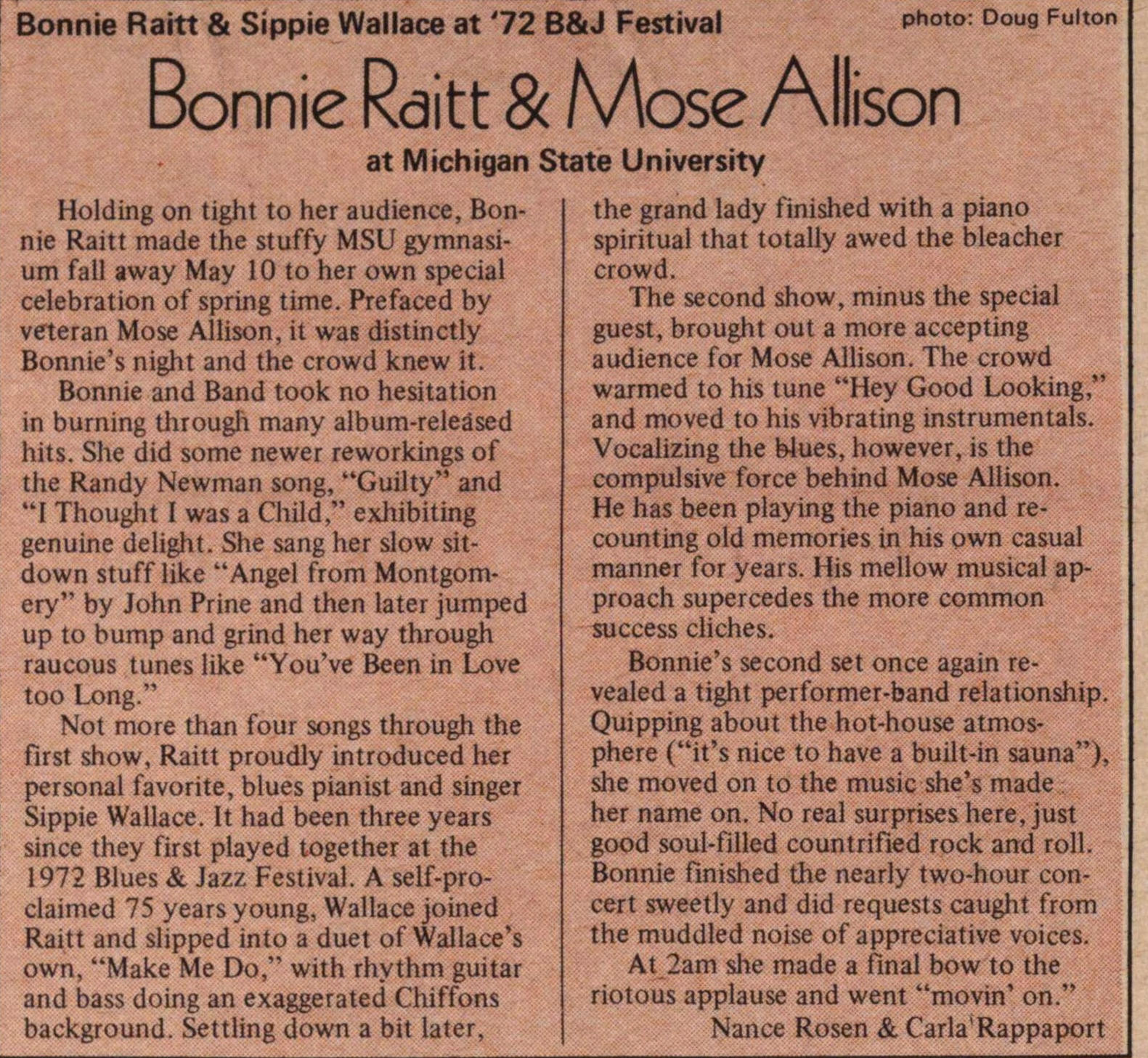 Holding on tight to her audience, Bonnie Raitt made the stuffy MSU gymnasium fall away May 10 to her own special celebration of spring time. Prefaced by veteran Mose Allison, it was distinctly Bonnie's night and the crowd knew it. Bonnie and Band took no hesitation in burning through many album-releásed hits. She did some newer reworkings of the Randy Newman song, "Guilty" and "I Thought I was a Child," exliibiting genuine delight. She sang her slow sitdown stuff like "Angel from Montgomery" by John Prine and then later jumped up to bump and grind her way through raucous tunes like "You've Been in Love too Long." Not more than four songs through the first show, Raitt proudly introduced her personal favorite, blues pianist and singer Sippie Wallace. It had been three years since they first played together at the 1972 Blues & Jazz Festival. A self-proclaimed 75 years young, Wallace joined Raitt and slipped into a duet of Wallace's own, "Make Me Do," with rhythm guitar and bass doing an exaggerated Chiffons background. Settling down a bit later, the grand lady finished with a piano spiritual that totally awed the bleacher crowd. The second show, minus the special guest, brought out a more accepting audience for Mose Allison. The crowd warmed to his tune "Hey Good Looking," and moved to his vibrating instrumentals. Vocalizing the blues, however, is the compulsive force behind Mose Allison. He has been playing the piano and recounting old memories in his own casual manner for years. His mellow musical approach supercedes the more common success clichés. Bonnie's second set once again revealed a tight performer-band relationship. Quipping about the hot-house atmosphere ("U's nice to have a built-in sauna"), she moved on to the music she's made her name on. No real surprises here, just good soul-filled countrified rock and roll. Bonnie finished the nearly two-hour concert sweetly and did requests caught from the muddled noise of appreciative voices. At 2am she made a final bow to the riotous applause and went "movin' on."