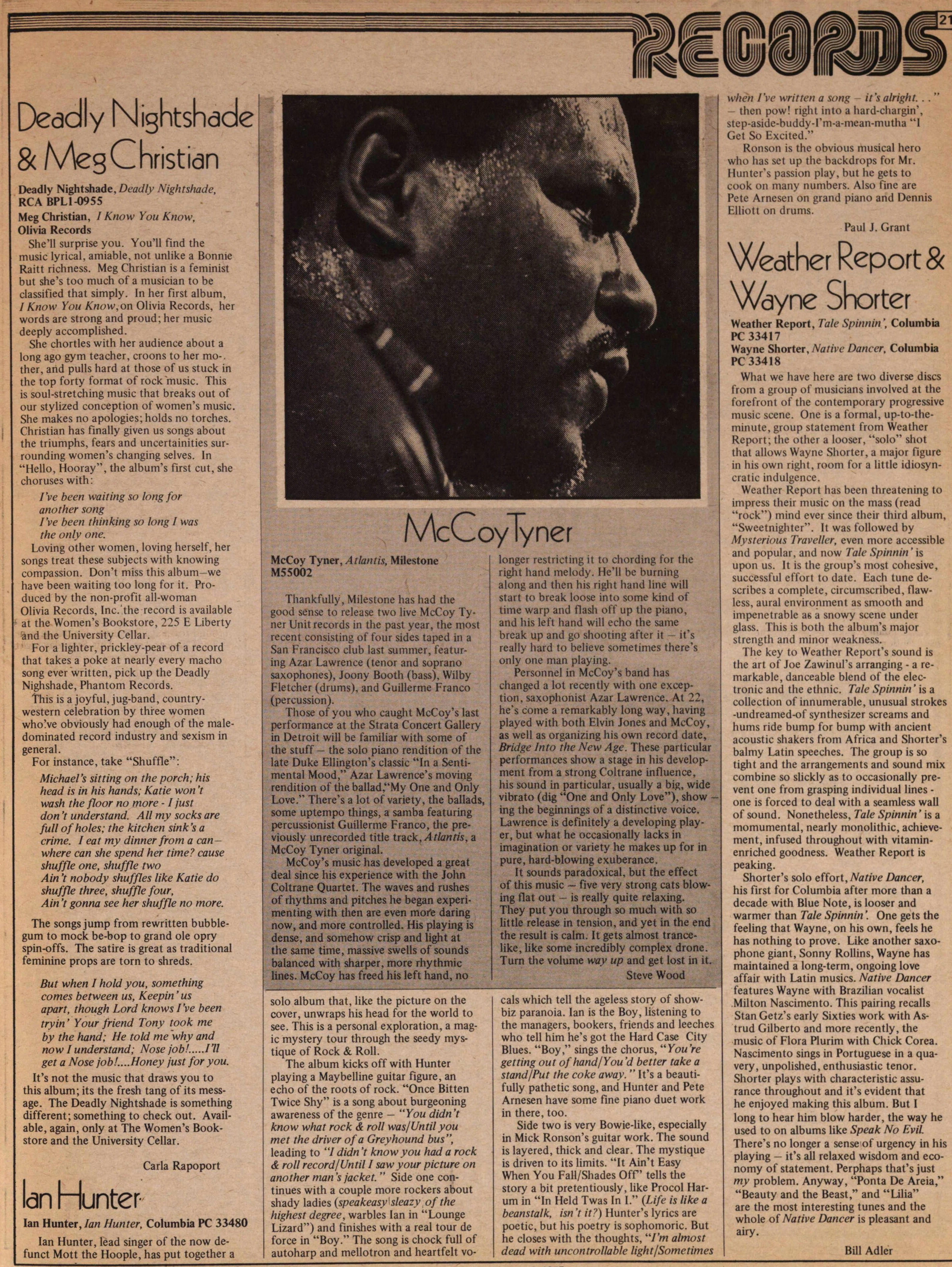 Deadly Nightshade, Deadly Nightshade, RCA BPL1 4)955 Meg Christian, Know You Know, Olivia Records She'll surprise you. You'll find the music lyrical, amiable, not unlike a Bonnie Raitt richness. Meg Christian is a feminist but she's too much of a musician to be classified that simply. In her first album, I Know You Know, on Olivia Records, her words are strong and proud; her music deeply accomplished. She chortles with her audience about a long ago gym teacher, croons to her mo-. ther, and pulls hard at those of us stuck in the top forty format of rock 'music. This is soul-stretching music that breaks out of our stylized conception of women's music. She makes no apologies;holds no torches. Christian has finally given us songs about the triumphs, fears and uncertainities surrounding women's changing selves. In "Helio, Hooray", the album's first cut, she choruses with: I've been waiting so longfor another song I've been thinking so long I was the only one. Loving other women, loving herself, her songs treat these subjects with knowing compassion. Don't miss this album- we have been waiting too long for it. Produced by the non-profit all-woman Olivia Records, Inc. the record is available at the Women's Bookstore, 225 E Liberty and the University Cellar. For a lighter, prickley-pear of a record that takes a poke at nearly every macho song ever written, piek up the Deadly Nighshade, Phantom Records. This is a joyful, jug-band, countrywestern celebration by three women wholve obviously had enough of the maledominated record industry and sexism in general. For instance, take "Shuffle": Michael's sitting on the porch; his head is in his hands; Kade won 't wash the floor no more - 1 just don't understand. All my socks are full of holes; the kuchen sink's a crime. I eat my dinner from a canwhere can she spend her time? cause shuffle one, shuffle two Ain 't nobody shuffles like Kat ie do shuffle three, shuffle f our, Ain 't gonna see her shuffle no more. The songs jump from rewritten bubblegum to mocic be-bop to grand ole opry spin-offs. The satire is great as traditional feminine props are torn to shreds. But when I hold you, something comes between us, Keepin ' us apart, though Lord knows I've been tryin ' Y our friend Tony took me by the hand; He told me why and now I understand; Nose job!.... .111 get a Nose job!....Honey just for you. It's not the music that draws you to this album; its the fresh tang of its message. The Deadly Nightshade is something different; something to check out. Available, again, only at The Women's Bookstore and the University Cellar. Ian Hunter, Ian Hunter, Columbia PC 33480 Ian Hunter, lead singer of the now defunct Mott the Hoople, has put together a solo album that, like the picture on the cover, unwraps his head for the world to see. This is a personal exploration, a magie mystery tour through the seedy mystique of Rock & Roll. The album kicks off with Hunter playing a Maybelline guitar figure, an echo of the roots of rock. "Once Bitten Twice Shy" is a song about burgeoning awareness of the genre - "You didn't know what rock & roll wasUntil you met the driver of a Greyhound bus", leading to "I didn 't know you had a rock & roll record Un til I sawyour picture on another man 's jacket. " Side one continúes with a couple more rockers about shady ladies (speakeasy 'sleazy of the highest degree, warbles lan in "Lounge Lizard") and finishes with a real tour de force in "Boy." The song is chock full of autoharp and mellotron and heartfelt cals which teil the ageless story of showbiz paranoia. Ian is the Boy, listening to the managers, bookers, friends and leeches who teil him he's got the Hard Case City Blues. "Boy," sings the chorus, "You're getting out of hand Y ou 'd bet ter take a standPut the coke away. " It's a beautifully pathetic song, and Hunter and Pete Arnesen have some fine piano duet work in there, too. Side two is very Bowie-like, especially in Mick Ronson's guitar work. The sound is layered, thick and clear. The mystique is driven to its limits. "It Ain't Easy When You FallShades Off' tells the story a bit pretentiously, like Procol Harum in "In Held Twas In [." (Life is like a beanstalk, isn 't it?) Hunter's lyrics are poetic, but his poetry is sophomoric. But he closes with the thoughts, '7 'm almost dead with uncontrollable lightSomctimes when t've written a song it's alright. . . " then pow! rigln into a hard-chargin', step-aside-buddy-rm-a-mean-mutha "I Get So Excited." Ronson is the obvious musical hero who lias set up the backdrops for Mr. Hunter's passion play, but he gets to cook on many numbers. Also fine are Pete Arnesen on grand piano and Dennis Elliott on drums.