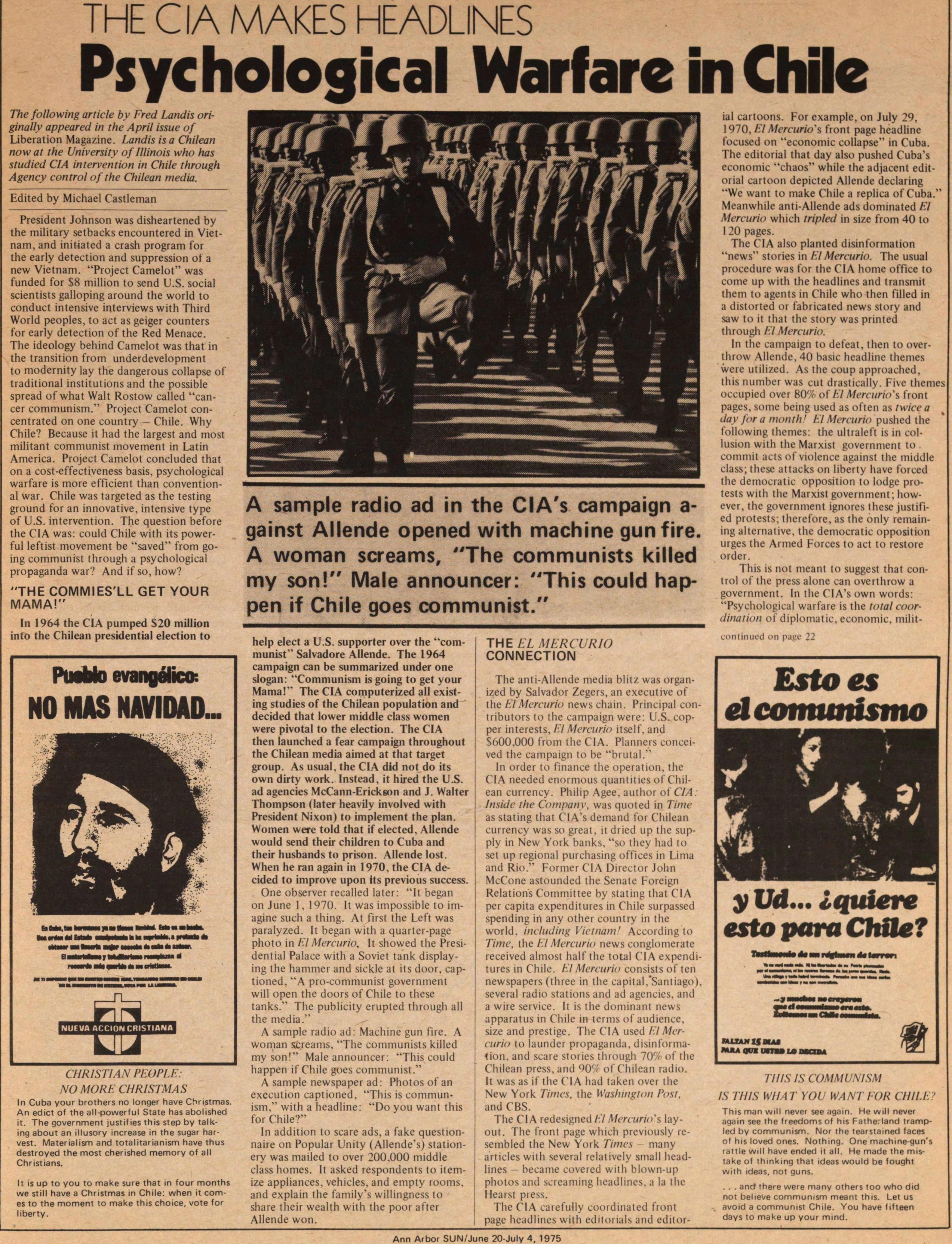 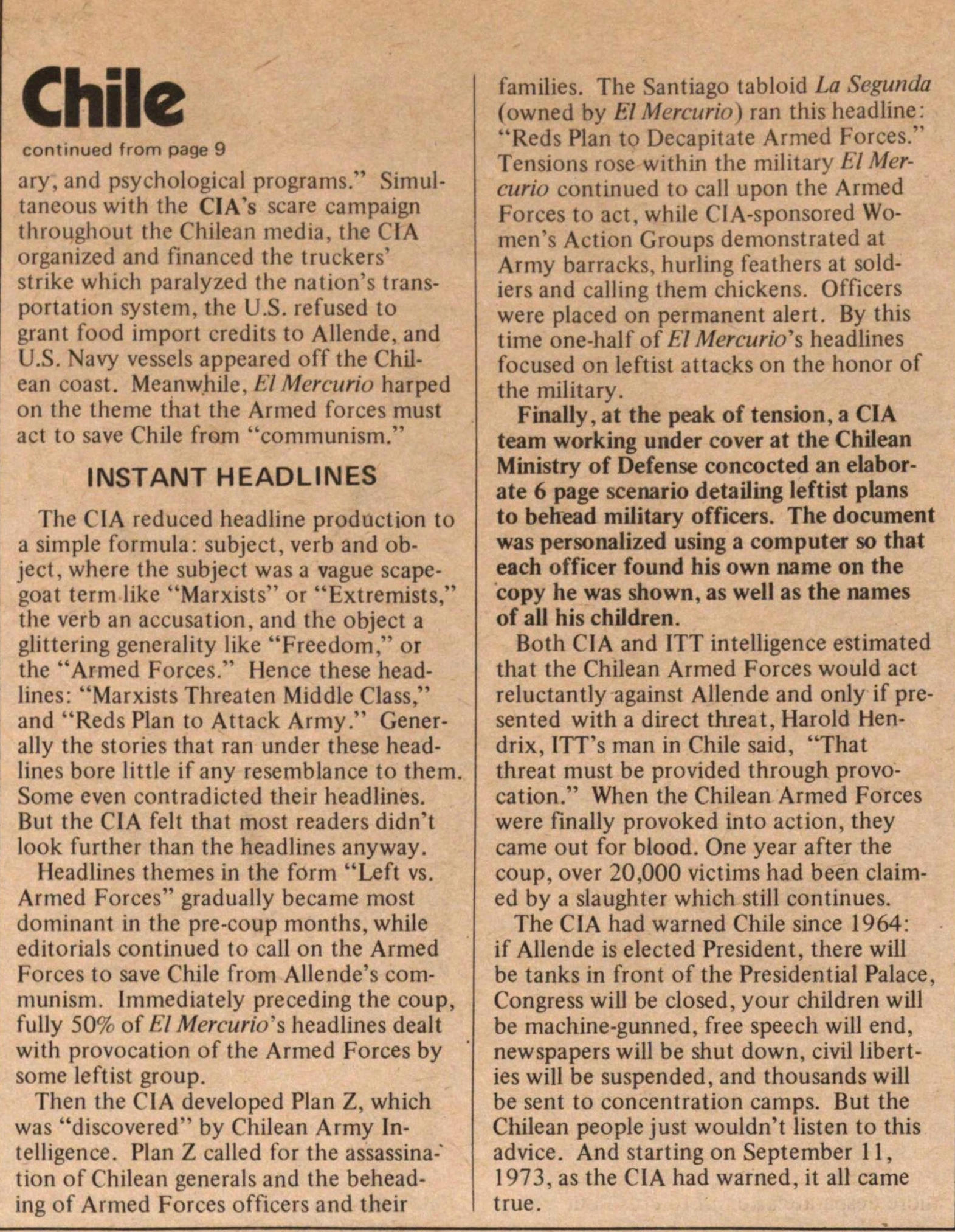 The following article by Fred Landis originally appeared in the April issue of Liberation Magazine. Landis is a Chilean now at the University of Illinois who has studied CIA intervention in Chile through Agency control of the Chilean media.

President Johnson was disheartened by the military setbacks encountered in Vietnam, and initiated a crash program for the early detection and suppression of a new Vietnam. "Project Camelot" was funded for $8 million to send U.S. social scientists galloping around the world to conduct intensive interviews with Third World peoples, to act as Geiger counters for early detection of the Red Menace.
The ideology behind Camelot was that in the transition from underdevelopment to modernity lay the dangerous collapse of traditional institutions and the possible spread of what Walt Rostow called "cancer communism."
Project Camelot concentrated on one country - Chile. Why Chile? Because it had the largest and most militant communist movement in Latin America. Project Camelot concluded that on a cost-effectiveness basis, psychological warfare is more efficient than conventional war. Chile was targeted as the testing ground for an innovative, intensive type of U.S. intervention. The question before the CIA was: could Chile with its powerful leftist movement be "saved" from going communist through a psychological propaganda war? And if so, how?

"THE COMMIES'LL GET YOUR MAMA!"

In 1964 the CIA pumped $20 million into the Chilean presidential election to help elect a U.S. supporter over the "communist" Salvadore Allende. The 1964 campaign can be summarized under one slogan: "Communism is going to get your Mama!" The CIA computerized all existing studies of the Chilean population and decided that lower middle class women were pivotal to the election. The CIA then launched a fear campaign throughout the Chilean media aimed at that target group. As usual, the CIA did not do its own dirty work. Instead, it hired the U.S. ad agencies McCann-Erickson and J. Walter Thompson (later heavily involved with President Nixon) to implement the plan. Women were told that if elected. Allende would send their children to Cuba and their husbands to prison. Allende lost. When he ran again in 1970, the CIA decided to improve upon its previous success.
One observer recalled later: "It began on June 1, 1970. It was impossible to imagine such a thing. At first the Left was paralyzed. It began with a quarter-page photo in El Mercurio. It showed the Presidential Palace with a Soviet tank displaying the hammer and sickle at its door, captioned, "A pro-communist government will open the doors of Chile to these tanks." The publicity erupted through all the media."
A sample radio ad: Machine gun fire. A woman screams, "The communists killed my son!" Male announcer: "This could happen if Chile goes communist." A sample newspaper ad: Photos of an execution captioned. "This is communism," with a headline: "Do you want this for Chile?"
In addition to scare ads, a fake questionnaire on Popular Unity (Allende's) stationery was mailed to over 200.000 middle class homes. It asked respondents to itemize appliances, vehicles, and empty rooms, and explain the family's willingness to share their wealth with the poor after Allende won.
THE EL MERCURIO CONNECTTION
The anti-Allende media blitz was organized by Salvador Zegers, an executive of the El Mercurio news chain. Principal contributors to the campaign were: U.S. copper interests. El Mercurio itself. and $600,000 from the CIA. Planners conceived the campaign to be "brutal."
In order to finance the operation, the CIA needed enormous quantities of Chilean currency. Philip Agee, author of CIA: Inside the Company, was quoted in Time as stating that CIA's demand for Chilean currency was so great, it dried up the supply in New York banks. "so they had to set up regional purchasing offices in Lima and Rio."
Former CIA Director John MeCone astounded the Senate Foreign Relations Committee by stating that CIA per capita expenditures in Chile surpassed spending in any other country in the world. including Vietnam!
According to Time, the El Mercurio news conglomerate received almost half the total CIA expenditures in Chile. El Mercurio consists of ten newspapers (three in the capital Santiago). several radio stations and ad agencies, and a wire service. It is the dominant news apparatus in Chile in terms of audience, size and prestige. The CIA used El Mercurio to launder propaganda, disinformation, and scare stories through 70% of the Chilean press, and 90% of Chilean radio. It was as if the CIA had taken over the New York Times, the Washington Post, and CBS.
The CIA redesigned El Mercurio layout. The front page which previously resembled the New York Times many articles with several relatively small headlines became covered with blown-up photos and screaming headlines, a la the Hearst press.
The CIA carefully coordinated front page headlines with editorials and editorial cartoons. For example, on July 29, 1970, El Mercurio's front page headline focused on "economic collapse" in Cuba. The editorial that day also pushed Cuba's economic "chaos" while the adjacent editorial cartoon depicted Allende declaring "We want to make Chile a replica of Cuba." Meanwhile anti-Allende ads dominated El Mercurio which tripeled in size from 40 to 120 pages.
The CIA also planted disinformation "news" stories in El Mercurio. The usual procedure was for the CIA home office to come up with the headlines and transmit them to agents in Chile who then filled in a distorted or fabricated news story and saw to it that the story was printed through El Mercurio.
In the campaign to defeat, then to overthrow Allende, 40 basic headline themes were utilized. As the coup approached, this number was cut drastically. Five theme occupied over 80% of El Mercurio's front pages, some being used as often as twice a day for a month! El Mercurio pushed the following themes: the ultraleft is in collusion with the Marxist government to commit acts of violence against the middle class; these attacks on liberty have forced the democratic opposition to lodge protests with the Marxist government; however, the government ignores these justified protests; therefore, as the only remaining alternative, the democratic opposition urges the Armed Forces to act to restore order.
This is not meant to suggest that control of the press alone can overthrow a government. In the CIA's own words: "Psychological warfare is the total coordination of diplomatic, economic,

THIS IS C0MMUNISM IS THIS WHAT YOU WANT FOR CHILE?
This man will never see again. He will never again see the freedoms of his Fatherland trampled by communism. Nor the tearstained faces of his loved ones. Nothing. One machine-gun's rattle will have ended it all. He made the mistake of thinking that ideas would be fought with ideas, not guns.
... and there were many others too who did not believe communism meant this. Let us avoid a communist Chile. You have fifteen days to make up your mind.

A sample radio ad in the ClA's campaign against Allende opened with machine gunfire. A woman screams, "The communists killed my son!" Male announcer: "This could happen if Chile goes communist." Chile

military, and psychological programs." Simultaneous with the CIA's scare campaign throughout the Chilean media, the CIA organized and financed the truckers' strike which paralyzed the nation's transportation system, the U.S. refused to grant food import credits to Allende, and U.S. Navy vessels appeared off the Chilean coast. Meanwhile, El Mercurio harped on the theme that the Armed forces must act to save Chile from "communism."

The CIA reduced headline production to a simple formula: subject, verb and object, where the subject was a vague scapegoat term like "Marxists" or "Extremists," the verb an accusation, and the object a glittering generality like "Freedom," or the "Armed Forces." Hence these headlines: "Marxists Threaten Middle Class," and "Reds Plan to Attack Army." Generally the stories that ran under these headlines bore little if any resemblance to them. Some even contradicted their headlines. But the CIA felt that most readers didn't look further than the headlines anyway.
Headlines themes in the form "Left vs. Armed Forces" gradually became most dominant in the pre-coup months, while editorials continued to call on the Armed Forces to save Chile from Allende's communism. Immediately preceding the coup, fully 50% of El Mercurio' s headlines dealt with provocation of the Armed Forces by some leftist group.
Then the CIA developed Plan Z, which was "discovered" by Chilean Army Intelligence. Plan Z called for the assassination of Chilean generals and the beheading of Armed Forces officers and their families. The Santiago tabloid La Segunda (owned by El Mercurio) ran this headline: "Reds Plan to Decapitate Armed Forces." Tensions rose within the military El Mercurio continued to call upon the Armed Forces to act, while CIA-sponsored Women's Action Groups demonstrated at Army barracks, hurling feathers at soldiers and calling them chickens. Officers were placed on permanent alert. By this time one-half of El Mercurio' s headlines focused on leftist attacks on the honor of the military.
Finally, at the peak of tension, a CIA team working under cover at the Chilean Ministry of Defense concocted an elaborate 6 page scenario detailing leftist plans to behead military officers. The document was personalized using a computer so that each officer found his own name on the copy he was shown, as well as the names of all his children.
Both CIA and ITT intelligence estimated that the Chilean Armed Forces would act reluctantly against Allende and only if presented with a direct threat, Harold Hendrix, ITTs man in Chile said, "That threat must be provided through provocation." When the Chilean Armed Forces were finally provoked into action, they came out for blood. One year after the coup, over 20,000 victims had been claimed by a slaughter which still continues.
The CIA had warned Chile since 1964: if Allende is elected President, there will be tanks in front of the Presidential Palace, Congress will be closed, your children will be machine-gunned, free speech will end, newspapers will be shut down, civil liberties will be suspended, and thousands will be sent to concentration camps. But the Chilean people just wouldn't listen to this advice. And starting on September 11, 1973, as the CIA had warned, it all came true.

CHRISTIAN PEOPLE:
NO MORE CHRISTMAS
In Cuba your brothers no longer have Christmas. An edict of the all-powerful State has abolished it. The government justifies this step by talking about an illusory increase n the sugar harvest. Materialism and totalitarianism have thus destroyed the most cherished memory of all Christians.
It is up to you to make sure that in four months we still have a Christmas in Chile: when it comes to the moment to make this choice, vote for liberty.