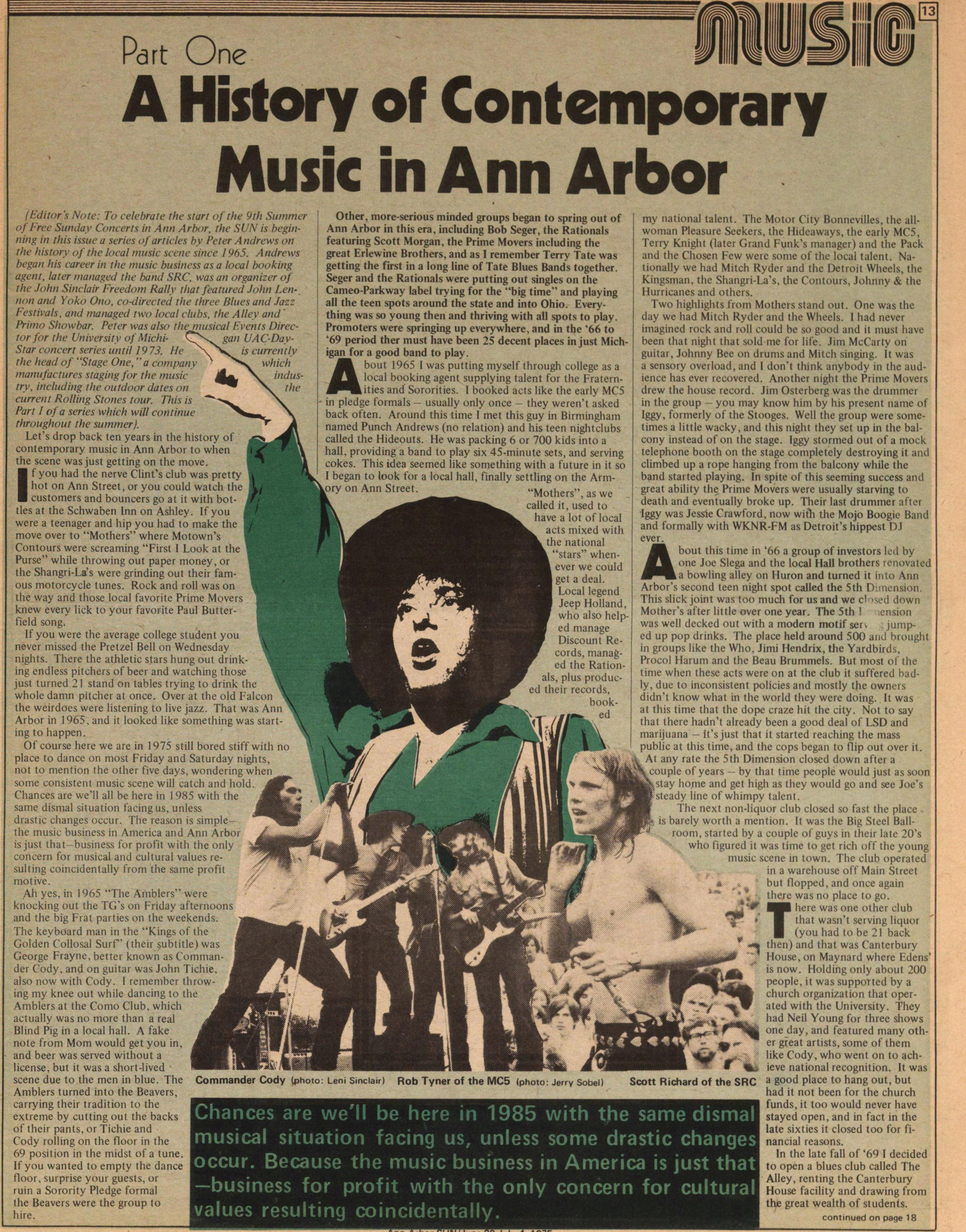 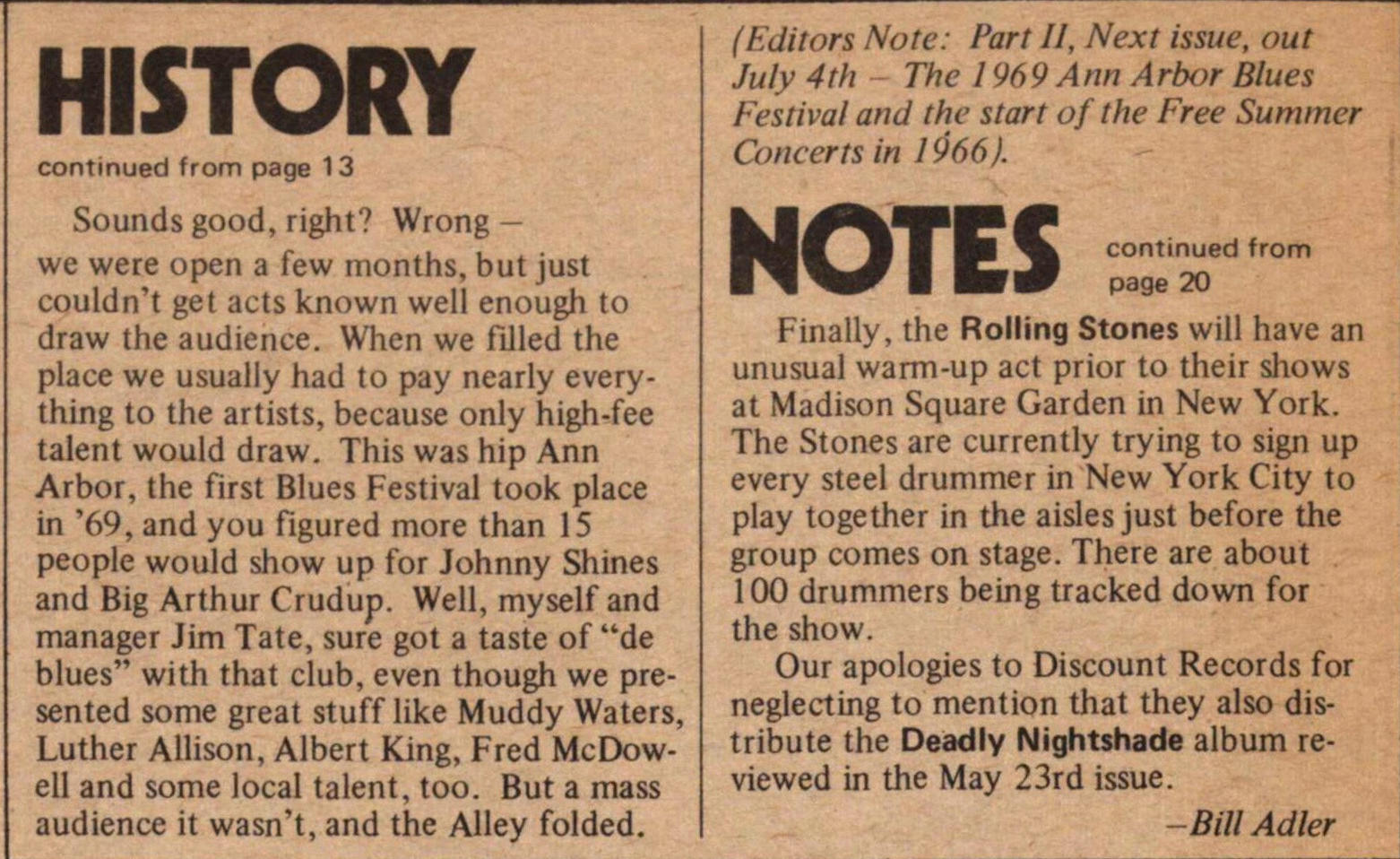 A History of Contemporary Music in Ann Arbor

(Editor's Note: To celebrate the start of the 9th Summer of Free Sunday Concerts in Ann Arbor, the SUN is beginning in this issue a series of articles by Peter Andrews on the history of the local music scene since 1965. Andrews began his career in the music business as a local booking agent, later managed the band SRC, was an organizer of the John Sinclair Freedom Rally that featured John Lennon and Yoko Ono, co-directed the three Blues and Jazz Festivals, and managed two local clubs, the Alley and Primo Showbar. Peter was also the musical Events director for the University of Michigan UAC-Day-Star concert series until 1973. He is currently the head of "Stage One, " a company which manufactures staging for the music industry, including the outdoor dates on the current Rolling Stones tour. This is Part I of a series which will continue throughout the summer).

Let's drop back ten years in the history of contemporary music in Ann Arbor to when the scene was just getting on the move.

If you had the nerve Clint's club was pretty hot on Ann Street, or you could watch the customers and bouncers go at it with bottles at the Schwaben Inn on Ashley. If you were a teenager and hip you had to make the move over to "Mothers" where Motown's Contours were screaming "First I Look at the Purse" while throwing out paper money, or the Shangri-La's were grinding out their famous motorcycle tunes. Rock and roll was on the way and those local favorite Prime Movers knew every lick to your favorite Paul Butterfield song.

If you were the average college student you never missed the Pretzel Bell on Wednesday nights. There the athletic stars hung out drinking endless pitchers of beer and watching those just turned 21 stand on tables trying to drink the whole damn pitcher at once. Over at the old Falcon the weirdoes were listening to live jazz. That was Ann Arbor in 1965, and it looked like something was starting to happen.

Of course here we are in 1975 still bored stiff with no place to dance on most Friday and Saturday nights, not to mention the other five days, wondering when some consistent music scene will catch and hold. Chances are we'll all be here in 1985 with the same dismal situation facing us, unless drastic changes occur. The reason is simple- the music business in America and Ann Arbor is just that-business for profit with the only concern for musical and cultural values resulting coincidentally from the same profit motive.

Ah yes, in 1965 "The Amblers" were knocking out the TG's on Friday afternoons and the big frat parties on the weekends. The keyboard man in the "Kings of the Golden Collosal Surf" (their subtitle) was George Frayne, better known as Commander Cody, and on guitar was John Tichie, also now with Cody. I remember throwing my knee out while dancing to the Amblers at the Como Club, which actually was no more than a real Blind Pig in a local hall. A fake note from Mom would get you in, and beer was served without a license, but it was a short-lived scene due to the men in blue. The Amblers turned into the Beavers, carrying their tradition to the extreme by cutting out the backs of their pants, or Tichie and Cody rolling on the floor in the 69 position in the midst of a tune. If you wanted to empty the dance floor, surprise your guests, or ruin a Sorority Pledge formal the Beavers were the group to hire.

Other, more-serious minded groups began to spring out of Ann Arbor in this era, including Bob Seger, the Rationals featuring Scott Morgan, the Prime Movers including the great Erlewine Brothers, and as I remember Terry Tate was getting the first in a long line of Tate Blues Bands together. Seger and the Rationals were putting out singles on the Cameo-Parkway label trying for the "big time" and playing all the teen spots around the state and into Ohio. Everything was so young then and thriving with all spots to play. Promoters were springing up everywhere, and in the '66 to '69 period there must have been 25 decent places in just Michigan for a good band to play.

About 1965 1 was putting myself through college as a local booking agent supplying talent for the Fraternities and Sororities. I booked acts like the early MC5 in pledge formals - usually only once - they weren't asked back often. Around this time I met this guy in Birmingham named Punch Andrews (no relation) and his teen nightclubs called the Hideouts. He was packing 6 or 700 kids into a hall, providing a band to play six 45-minute sets, and serving cokes. This idea seemed like something with a future in it so I began to look for a local hall, finally settling on the Armory on Ann Street. "Mothers", as we called it, used to have a lot of local acts mixed with the national "stars" whenever we could get a deal. Local legend Jeep Holland, who also helped manage Discount Records, managed the Rationals, plus produced their records, booked my national talent, The Motor City Bonnevilles, the all-woman Pleasure Seekers, the Hideaways, the early MC5, Terry Knight (later Grand Funk's manager) and the Pack and the Chosen Few were some of the local talent. Nationally we had Mitch Ryder and the Detroit Wheels, the Kingsman. the Shangri-La's, the Contours, Johnny & the Hurricanes and others.

Two highlights from Mothers stand out. One was the day we had Mitch Ryder and the Wheels. I had never imagined rock and roll could be so good and it must have been that night that sold me for life. Jim McCarty on guitar, Johnny Bee on drums and Mitch singing. It was a sensory overload, and I don't think anybody in the audience has ever recovered. Another night the Prime Movers drew the house record. Jim Osterberg was the drummer in the group - you may know him by his present name of Iggy, formerly of the Stooges. Well the group were sometimes a little wacky, and this night they set up in the balcony instead of on the stage. Iggy stormed out of a mock telephone booth on the stage completely destroying it and climbed up a rope hanging from the balcony while the band started playing. In spite of this seeming success and great ability the Prime Movers were usually starving to death and eventually broke up. Their last drummer after Iggy was Jessie Crawford, now with the Mojo Boogie Band and formally with WKNR-FM as Detroit's hippest DJ ever.

About this time in '66 a group of investors led by one Joe Slega and the local Hall brothers renovated a bowling alley on Huron and turned it into Ann Arbor's second teen night spot called the 5th Dimension. This slick joint was too much for us and we closed down Mother's after little over one year. The 5th Dimension was well decked out with a modern motif serving jumped up pop drinks. The place held around 500 and brought in groups like the Who, Jimi Hendrix, the Yardbirds, Procol Harum and the Beau Brummels. But most of the time when these acts were on at the club it suffered badly, due to inconsistent policies and mostly the owners didn't know what in the world they were doing. It was at this time that the dope craze hit the city. Not to say that there hadn't already been a good deal of LSD and marijuana - it's just that it started reaching the mass public at this time, and the cops began to flip out over it. At any rate the 5th Dimension closed down after a couple of years - by that time people would just as soon stay home and get high as they would go and see Joe's steady line of whimpy talent.

The next non-liquor club closed so fast the place is barely worth a mention. It was the Big Steel Ballroom, started by a couple of guys in their late 20's who figured it was time to get rich off the young music scene in town. The club operated in a warehouse off Main Street but flopped, and once again there was no place to go.

There was one other club that wasn't serving liquor (you had to be 21 back then) and that was Canterbury House, on Maynard where Edens' is now. Holding only about 200 people, it was supported by a church organization that operated with the University. They had Neil Young for three shows one day, and featured many other great artists, some of them like Cody, who went on to achieve national recognition. It was a good place to hang out, but had it not been for the church funds, it too would never have stayed open, and in fact in the late sixties it closed too for financial reasons.

In the late fall of '69 I decided to open a blues club called The Alley, renting the Canterbury House facility and drawing from the great wealth of students.

Sounds good, right? Wrong - we were open a few months, but just couldn't get acts known well enough to draw the audience. When we filled the place we usually had to pay nearly everything to the artists, because only high-fee talent would draw. This was hip Ann Arbor, the first Blues Festival took place in '69, and you figured more than 15 people would show up for Johnny Shines and Big Arthur Crudup. Well, myself and manager Jim Tate, sure got a taste of "de blues" with that club, even though we presented some great stuff like Muddy Waters, Luther Allison, Albert King, Fred McDowell and some local talent, too. But a mass audience it wasn't, and the Alley folded.