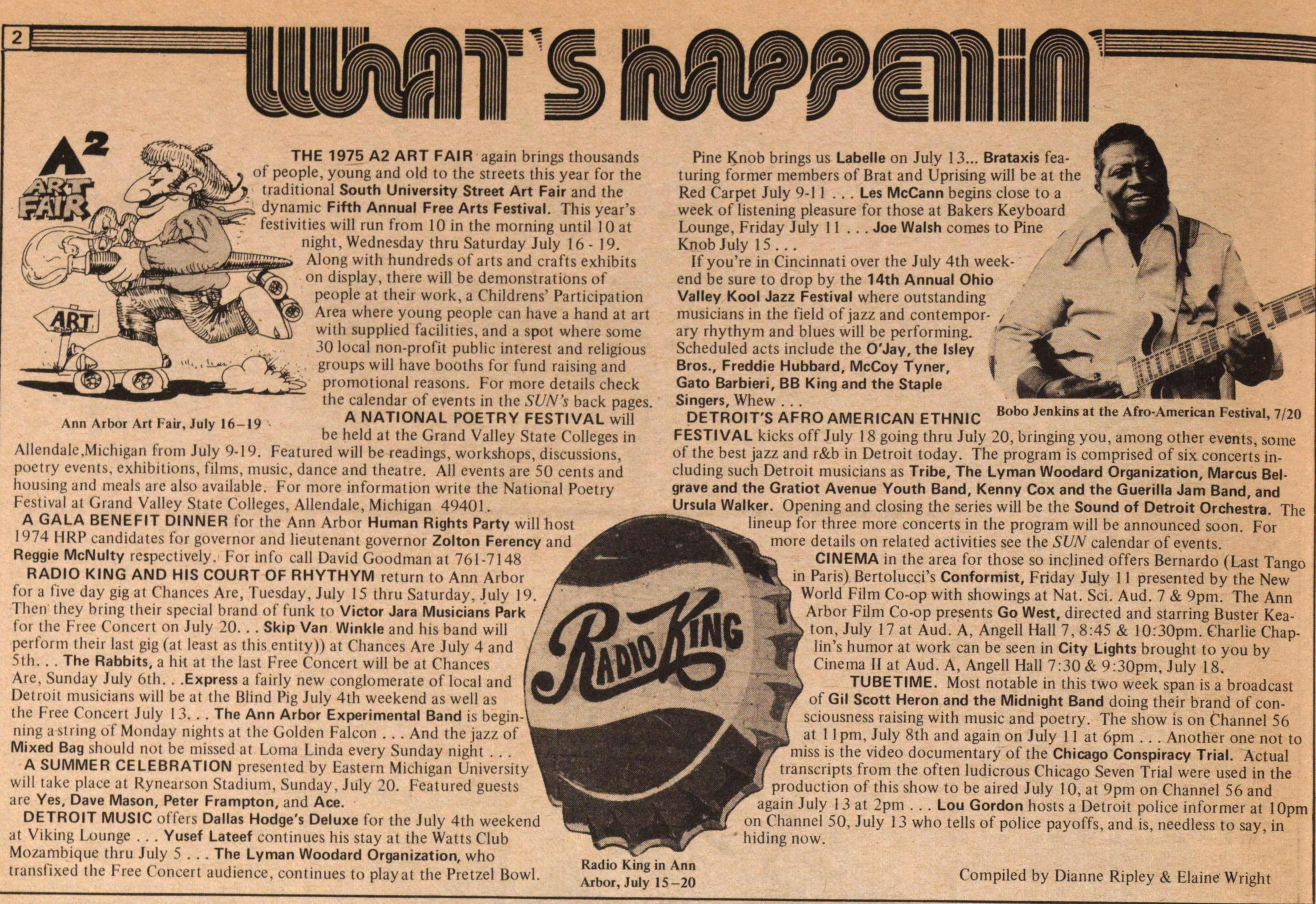 THE 1975 A2 ART FAIR again brings thousands of people, young and old to the streets this year for the traditional South University Street Art Fair and the dynamic Fifth Annual Free Arts Festival. This year's festivities will run from 10 in the morning until 10 at night, Wednesday thru Saturday July 19. Alung with hundreds of arts and crafts exhibits on display, there will be demonstrations of people at their work, a Childrens' Participation Area where young people can have a hand at art with supplied facilities, and a spot where some 30 local non-profit public interest and religious groups will have booths for fund raising and promotional reasons. For more details check the calendar of events in the SUN 's back pages.

A NATIONAL POETRY FESTIVAL will be held at the Grand Valley State Colleges in Allendale Michigan from July 9-19. Featured will be readings, workshops, discussions, poetry events, exhibitions, films, music, dance and theatre. All events are 50 cents and housing and meals are also available. For more information write the National Poetry Festival at Grand Valley State Colleges, Allendale, Michigan 49401.

A RADIO KING AND HIS COURT OF RHYTHYM return to Ann Arbor for a five day gig at Chances Are, Tuesday, July 15 thru Saturday, July 19. Then they bring their special brand of funk to Victor Jara Musicians Park, for the Free Concert on July 20. . . Skip Van Winkle and his band will perform their last gig (at least as this entity) at Chances Are July 4 and 5th. . . The Rabbits, a hit at the last Free Concert will be at Chances Are, Sunday July 6th. . .Express a fairly new conglomerate of local and Detroit musicians will be at the Blind Pig July 4th weekend as well as the Free Concert July 13... The Ann Arbor Experimental Band is beginning a string of Monday nights at the Golden Falcon . . . And the jazz of Mixed Bag should not be missed at Loma Linda every Sunday night

DETROIT MUSIC offer Dallas Hodge's Deluxe for the July 4th weekend at Viking Lounge . . . Yusef Lateef continues his stay at the Watts Club Mozambique thru July 5 ... The Lyman Woodard Organization, who transfixed the Free Concert audience, continues to play at the Pretzel Bowl.

Pine Knob brings us Labelle on July 13... Brataxis featuring former members of Brat and Uprising will be at the Red Carpet July 9-11 ... Les McCann begins close to a week of listening pleasure for those at Bakers Keyboard Lounge, Friday July 1 1 ... Joe Walsh comes to Pine Knob July 15...

If you're in Cincinnati over the July 4th weekend be sure to drop by the 14th Annual Ohio Valley Kool Jazz Festival where outstanding musicians in the field of jazz and contemporary rhythm and blues will be performing. Scheduled acts include the O'Jay, the Isley Bros., Freddie Hubbard, McCoy Tyner, Gato Barbieri, BB King and the Staple Singers, Whew . . .

DETROIT'S AFRO AMERICAN ETHNIC FESTIVAL kicks off July 18 going thru July 20, bringing you, among other events, some of the best jazz and r&b in Detroit today. The program is comprised of six concerts including such Detroit musicians as Tribe, The Lyman Woodard Organization, Marcus Belgrave and the Gratiot Avenue Youth Band, Kenny Cox and the Guerilla Jam Band, and Ursula Walker. Opening and closing the series will be the Sound of Detroit Orchestra. The lineup for three more concerts in the program will be announced soon. For more details on related activities see the SUN calendar of events.

CINEMA in the area for those so inclined offers Bernardo (Last Tango in Paris) Bertolucci's Conformist, Friday July 11 presented by the New World Film Co-op with showings at Nat. Sci. Aud. 7 & 9pm. The Ann Arbor Film Co-op presents Go West, directed and starring Buster Keaton, July 17 at Aud. A, Angell Hall 7, 8:45 & 10:30pm. Charlie Chaplin's humor at work can be seen in City Lights brought to you by Cinema II at Aud. A, Angell Hall 7:30 & 9:30pm. July 18.

TUBETIME. Most notable in this two week span is a broadcast of Gil Scott Heron and the Midnight Band doing their brand of consciousness raising with music and poetry. The show is on Channel 56 at 11 pm, July 8th and again on July 11 at 6pm . . . Another one not to miss is the video documentary of the Chicago Conspiracy Trial. Actual transcripts from the often ludicrous Chicago Seven Trial were used in the production of this show to be aired July 10, at 9pm on Channel 56 and again July 13 at 2pm . . . Lou Gordon hosts a Detroit police informer at 10pm on Channel 50, July 13 who tells of police payoffs, and is, needless to say, in hiding now.